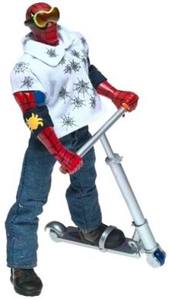 Ever since he swung onto the scene with a “thwip” in ’63, children have been unable to get enough of Spider-man. This can be evidenced by the never-ending amount of discarded Spider-man toys that populate this nation’s many thrift stores and landfills. Yes, he is indeed a license for a toy company to print money, with the only limit being the company’s imagination. Now, Toy Biz, the company which held the Spidey license for the entirety of the ’90s and then some, had quite the imagination…which often led to some disturbingly stupid ideas, almost all of which were made into toys despite making zero sense for the character. We don’t mean to pick on them, but they made 99% of all Spider-man toys ever made! We just wanted to call out the 10 goofiest Spidey action figures ever–they’ve got no one to blame but themselves for flooding the market. 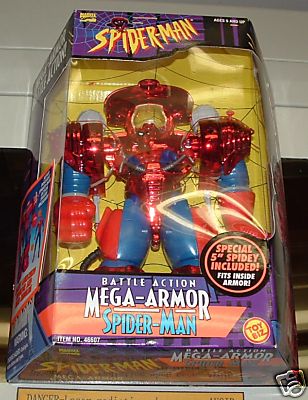 There are just certain pieces of logic every kid knows. Superman doesn’t need a car, the Hulk doesn’t need a utility belt, and Spider-man does not require giant anime-like armor. For one thing, riding around in a giant robot would negate most of his superpowers, like sticking onto walls and webslinging about town. For another thing, there’s already a superhero who wears armor perfectly well, and his name is Iron Man. Perhaps we can’t blame Toy Biz for trying to combine two of Marvel’s biggest heroes into one toy to pander to dumb little kids but…oh, wait. We’re adult nerds. Of course we can blame them. 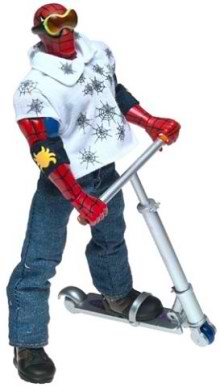 By the ’00s, Toy Biz had clearly begun to run out of ideas for Spider-man and began to throw him into random costumes and sports scenarios for a truly surreal effect, by which of course we means horribly stupid. Street Scooter Spider-man seems to degenerate the character in that of an 11-year-old boy, and, judging by his goggles and elbow pads, one with an overprotective mother (or elderly aunt). This wasn’t at all cool. This was an embarrassing, candid side of Spider-man that nobody should have seen. 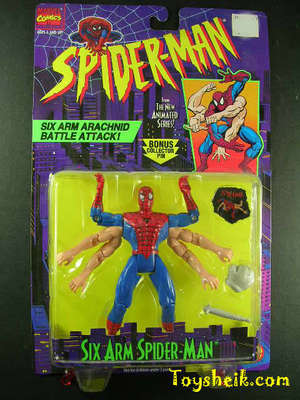 For a brief story arc in the ’70s, Spider-man grew six arms and was forced to live in isolation until Curt Conners fixed him up (I’m sure the Lizard fit in there somewhere too, but who cares). It’s hardly a storyline anybody regards as their favorite, but seeing as it made its way into the Fox Spider-man cartoon, Toy Biz saw opportunity to inject another terrible but technically accurate Spider-man into the line. You can almost see the disappointed faces of little Spider-fans at Christmas, unwrapping their favorite hero, and their smiles dropping away as soon as they notice the extra limbs. 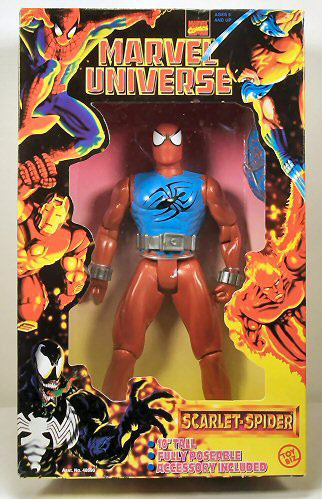 The 10-inch Marvel Universe figures were never much to look at or behold; indeed, most of them were frugal repaints of existing figures, such as the She-Hulk that was actually a Toy Biz  Xena: Warror Princess painted green. Still, this Scarlet Spider was one of the worst–not because he’s the icon for the ill-fated Clone Saga, although that doesn’t help–but because the character’s trademark hoodie is just a painted on smudge. Clearly, yhe pain of the “Clone Wars” saga was far reaching and wide. 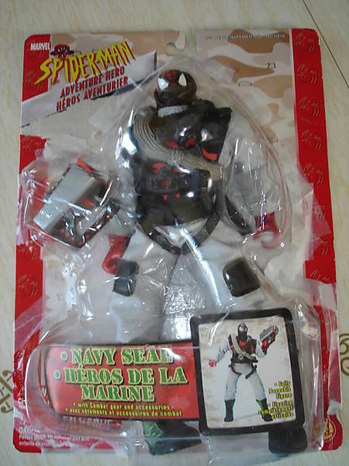 Semper Fi, Spidey! Bet you didn’t know that Spidey was a leatherneck! It’s true, and both he and Jesse Ventura got the drop on Charlie back in the day. What is absolutely more stupid than a military Spider-man is the fact that the figure comes with rope. Because lord knows Spider-man needs something to climb with. 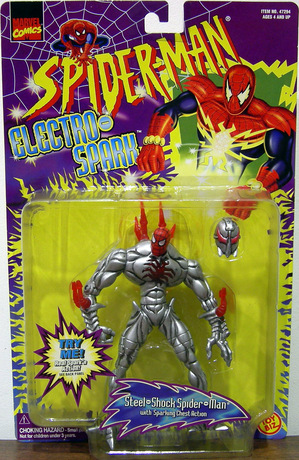 Yes, when Spider-man has fight…uh…shocks…or maybe steel…or steel that shocks…whatever, the first thing Spidey does is ‘roid himself well past the point of insanity. This might explain how he got his new power, which is having a chest which lights up and sparks. Also, he’s wearing some ridiculous armor copied from a “Mercyful Fate” album cover. There’s a place for heroes whose power is having a light-up chest, and that place is probably the Legion of Superheroes. Not Spider-man. 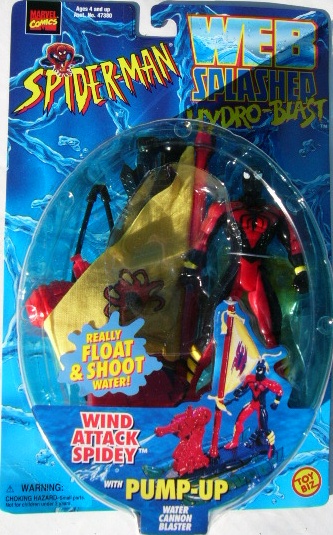 Sadly, it’s not the kind of “Wind Attack” you’re hoping. No, it’s just Spider-man on a wind surfer, likely not your first, or let’s face it, 30th choice on the “vehicles I would use to smite my enemies” list. Also, he’s looking a little like the Tarantula in this outfit, and that’s not cool at all. 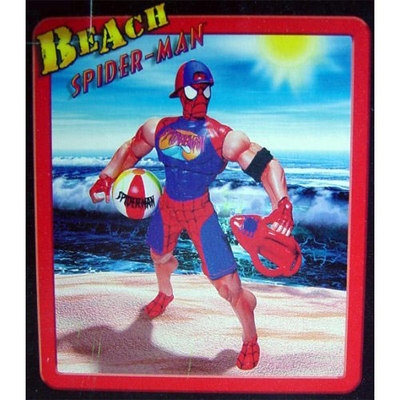 Yep, it’s Baywatch Spidey. He’s ready to save a drowning victim or perhaps play a little beach volleyball with a ball with his name on it (he’s lost several already, and he’s not made out of money, okay?). It’s genuinely hard to see this figure and not feel embarrassed; about the only thing kids could imagine with this toy is that a Spidey is so desperate for cash that’s he’s making some movie for basic cable (which probably actually happened at one point in the comics). It’s hard to see your idols sell out. 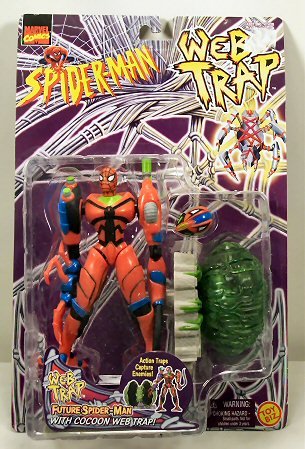 Apparently in the future, Spider-man dons the stupidest, clunkiest armor he can find, complete with chicken feet. Perhaps his primary attack is to make his enemies laugh themselves to death. He also comes with a cocoon trap that looks big enough to catch a reasonably sized house cat, which should be a relief to Dr. Octopus. Even if Spidey put a glazed ham in there, ol’ Ock wouldn’t get much worse than a slap on the wrist. 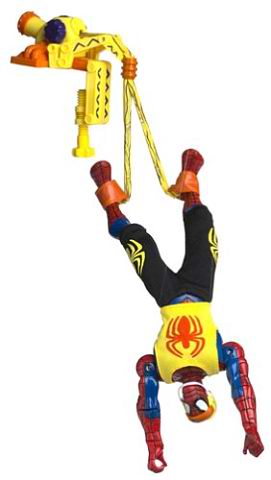 Fucking Bungee Jump? Seriously? What, if anything, would that offer a guy who has the powers of a spider and has frigging webshooters on his arms? The entire Spider-man Adventure Hero line was so inappropriately named seeing as most of the “Adventures’ depicted are things people do while at a tropical resort. Perhaps, “Spider-man Vacation Hero” would have been a better title, especially if each of these figures came with suntan lotion and a small bottle of rum.