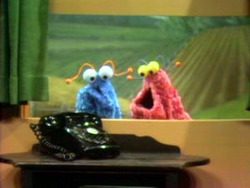 The puppet and its copyrighted Muppet cousin have a special role in enforcing childhood trauma. Regular cartoons and the invariably grotesque realm of claymation can easily conjure up terrible sights, but puppets occupy a unique space; they’re physically real and capable of interacting with humans, but they’re clearly not anything human. A puppet exists, and it’s therefore just a little more plausible for kids to think that demonic, sharp-toothed Cookie Monsters will come for them when the lights are out and the parents are gone.

Puppets also symbolize just how horrifyingly wrong adults can be when attempting to delight young viewers. We’re willing to believe that the people behind every one of the following entries thought they were creating adorable characters that would leave children laughing with joy. Little did they suspect that they were, in fact, building nightmares.

McDonald’s mix of puppetry and mechanically separated chicken parts is disturbing only when a child thinks about just what they symbolize. Seen briefly in commercials, they’re cute, happy, dim-witted munchkins who smother their nether regions in barbeque sauce. The unnerving part arrives with the implication that kids are supposed to pop these smiling, goggle-eyed creatures into their mouths and chew them. Never mind the agonized screams. It may be that McDonald’s realized this and made sure that the McNuggets didn’t appear naked in commercials, as dressing them up de-emphasizes their theoretically edible nature.

Source: Sesame Street
The Puppet: A pharaoh-like version of Ernie, encountered by the actual Bert and Ernie.

As TV’s first unabashedly out-of-the-closet couple explores an Egyptian pyramid, Bert eagerly plunges into the darkness while the nervous Ernie stays behind to be taunted by a living Muppet statue. Truth be told, the short isn’t terribly scary by puppet standards, as any frightening moments are alleviated by the harmless, friendly Egyptian Ernie and the ensuing musical number. Yet the word of a thousand YouTube posters suggests that children far and wide were scarred by Ernie’s encounter with his embalmed, millennia-old doppelg?nger, and Sesame Street supposedly edited the clip to seem less disturbing.

Source: Star Fleet, or X-Bomber if you’re one of those insufferable fans who insists on calling Japanese shows by their original, God-given titles.
The Puppets: A multitude of aliens and semi-humans, all rendered with a mix of Power Rangers-esque models and Thunderbirds-style puppetry.

The marionettes of Thunderbirds were never garish enough to frighten young viewers, but Star Fleet, Japan’s own all-puppet tokusatsu show, filled itself with monstrosities, possibly due to the influence of co-creator Go Nagai (who also devised Cutey Honey, Mazinger, and many of the things wrong with anime and manga). While the show’s human characters, including the massively chinned Barry Hercules, are standard puppets, the aliens invading their solar system are suitably ugly. Their battle commander, Makara, has a small devil-face where her left eye should be, and her chief lackey, Orion, looks like a cancerous version of Dr. Zaius from Planet of the Apes, with a centipede atop his battle helmet. But they were supposed to be scary. Less intentional was the look of Kirara, a big wooly creature that guards the Star Fleet cast’s token mysterious princess. It’s clearly supposed to be some cuddly Chewbacca stand-in, but Kirara is a hulking yeti with an exposed ribcage and glowing yellow eyes. What’s more, it rarely does anything. It mostly stands by as the more human heroes converse, seemingly oblivious to the abominable space hellbeast in their midst.

Source: The children’s show of the same name.
The Puppet: An aimlessly gesticulating marionette with an eerily broad grin plastered on its face.

Some baby-boomers may cling to fond memories of Howdy Doody, but the show was arguably American youth’s introduction to unintentionally harrowing puppetry. Howdy was never as horrendous as the misbegotten creations of low-budget educational shows in later decades, but there was something unnatural about the cowboy-ish creature’s contortions and his association with live actors. Kids of the day ate it up; perhaps out of fear, perhaps out of a lack of nothing better on TV. Either way, it ensured that Howdy would have a decades-long run and a permanent place in the history of subtly unnerving children’s fare.

The Source: Fraggle Rock
The Puppet: A singing, kvetching, eyeless oracle made of trash.

Fraggle Rock may have made kids a little more likely to believe the hollow-earth theories of crackpot scientists, but at least its underground realm was a friendly place, full of colorful Muppets instead of mole people and human sacrifices. Marjory seems part of the pleasant aura, being a cranky yet benevolent garbage-beast that dispenses advice to Fraggles, with two mouse-gremlin attendants adding to her Jabba-like image. Yet there’s something undeniably eerie about this conglomeration of filth emerging from the ground and singing about her masochistic proclivities. Perhaps she’d be less creepy if she had eyes, though a more human look would probably just make it worse.

Source: Sesame Street
The Puppets: Aliens that appear to be masses of tentacles with eyes, mouths and antennae.

For those of us raised on Sesame Street, the two extraterrestrials known as the Yip-Yips were frightening not because they might descend from the skies and devour us, but because we didn’t know just what the hell the things would do. Most of their skits find the two creatures floating around, scrutinizing various earth objects, and repeating all sorts of strange, panicky noises. So we’d envision them flying wildly about our bedrooms, squawking in their half-alien tongue and scaring us with their sheer indecipherable otherworldliness. Oh, and don’t bother closing your w
indow to keep them out, because, as we see in the clip above, they can move through walls. As adults, we may find them endearing, but many children saw them as disturbing, fish-mouthed embodiments of the unknown.

With a jerky malevolence rarely seen outside of Chuck E. Cheese animatronics, the pair sings about the value of not putting objects in your mouth, emphasizing the point with freakish close-ups of the female puppet while the male one unwholesomely glances off-camera, apparently envisioning the fates of any children foolish enough to disregard his message. A bunch of normal-looking animal puppets join them at the end, with a lion delivering a moral that would serve children well into their hedonistic college years.

It begs the question of why the show simply didn’t use people instead of aberrant creatures that spastically mouth songs and lessons with their chimp-like beaks. Peppermint Park also bumps the surrealism up another notch by sticking leprosy-riddled stegosaurs and pig-headed creatures alongside slightly more human faces, like that of an elderly puppet-woman with the voice of a ten-year-old. It’s an excellent way to introduce children to the uncanny valley and the mockeries of humanity that inhabit it.

Cast into space by their homemade rocket, these blank-faced junior explorers and their stuffed cat find themselves on an alien world full of puppets only slightly more abhorrent than the allegedly human children. The stars bobble around like Popsicle-stick figures, and their monotone childlike voices only make it easier for real kids to imagine themselves trapped within the lifeless wooden hell of a ventriloquist’s dummy.

Source: The Wiggles, the kid-oriented Australian musical foursome bound to inspire all sorts of urban myths about how certain members died in cocaine binges.
The Puppets: A number of glassy-eyed simulacrums of the Wiggles quartet.

Many hideous puppets were creations of ill-conceived trends from the ’70s and ’80s, so it’s somehow comforting to see that, in this age of rendered computer graphics and video games, children’s entertainment can still produce unspeakable puppet horrors. The video starts off with one jittery mock-up of a Wiggles member squeaking out a song in a voice that even Alvin and the Chipmunks would have to tone down. As the music continues, more creatures appear in this cavalcade of hellish visions. Tough it out, kids. If we had to put up with Jim Henson’s most sadistic material, you can make it through the Wiggles.