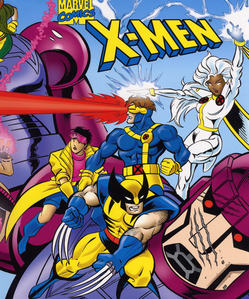 When Marvel Comics introduced the world to a new breed of superheroes in the 1960s, TV execs clamored to bring the adventures of these characters to the small screen. Since then, viewers have been constantly bombarded with the animated exploits of Spider-man, The Incredible Hulk, The Fantastic Four, The X-Men and the rest of Marvel’s rogue gallery of heroes. Some of these shows helped raise awareness of the comics they were based upon, while others did no favors for the books that inspired them. With a number of cartoons in development (including the second season of the great Spectacular Spider-Man series and the Iron Man:Armored Adventures cartoon in which Tony Stark appears to be modeled on one of the Jonas Brothers), the time feels right to look back upon what shows have come before. Here’s a look at the best at worst Marvel toons. So far, anyway.

Marvel’s first foray into direct-to-DVD releases, Ultimate Avengers: The Movie proved to the company that audiences were hungry for adult-oriented animated features based on their characters. A Cliff’s Notes-styled adaptation of Mark Millar and Bryan Hitch’s The Ultimates comic, the film explores the creation–and subsequent revival–of Captain America, how Nick Fury orchestrates the forming of the Avengers and a showdown with the Hulk over the course of a taut 71 minutes. Though hardcore fans of the source material balked at having certain events glossed over (i.e. Hank Pym’s abusive behavior towards the Wasp) and wondered where Hawkeye and Scarlet Witch were, these shortcomings are acceptable given how entertaining the finished product, well, ultimately turned out to be.

Unavailable on DVD in the U.S., The Marvel Super Heroes was a syndicated series originally airing in 1966 that was constructed of cartoons based on Captain America, The Hulk, Iron Man, Thor and the Sub-Mariner. With animation that was only slightly better than the Syncro-Vox superimposed lips technique featured on Clutch Cargo, the show is most fondly remembered for how it showcases stories taken directly from various Marvel comics titles. While elements of the show now seem almost hopelessly dated, it’s lasting influence can been seen in both the Iron Man film (which features an instrumental version of the toon’s theme song) and the limited animation used in the Watchmen motion comics.

Taking to the airwaves just as the comic was reaching its creative zenith, 1967’s The Fantastic Four cartoon is an animated tribute to the genius of Jack Kirby and Stan Lee. “United in their fight against interplanetary evil,” Mr. Fantastic, The Human Torch, The Thing and The Invisible Girl fought enemies ranging from Skrulls to Dr. Doom during the show’s 20-episode run. Thanks largely to Alex Toth’s character designs, the cartoon presented a credible approximation of Kirby’s art for the small-screen. But the respect towards the comic didn’t end there. In the “Galactus” episode, writers Phil Hahn and Jack Hanrahan somehow cram the planet-eating giant’s entire storyline into one episode without lessening its impact–a feat that subsequent Fantastic Four cartoons have yet to pull off as successfully.

Airing on Fox from 1992 to 1997, X-Men holds the distinction of being Marvel’s longest-running cartoon series. With appearances from characters spanning the history of the comic and serialized storytelling that rewarded frequent viewers, X-Men quickly established itself as a series that both paid respect to its origins and forged its own creative path. A rare feat for a cartoon series predominately geared towards pre-teens.
Since it felt like it was on forever–in the best possible way–it’s not surprising that the series got around to tackling some of the comic’s best-loved storylines. Thusly, viewers were treated to (mostly) faithful animated adaptations of the “Dark Phoenix” and “Days of Future Past” sagas and originals like the sci-fi heavy “One Man’s Worth” two-parter in which Professor X was dead and Wolverine and Storm were getting it on. Hot.

As much fun as Spider-man and His Amazing Friends, the ’90s Fox show or The Spectacular Spider-man may be, they can’t hold a candle to Webhead’s original 1967-70 cartoon. The most well-known of all superhero toons, Spider-man is a pop culture masterpiece that rocketed the character into the public consciousness with the initial sting of the now-famous theme song. Music plays a key role in the series’ continuing appeal. Bob Harris’ theme has been covered by everyone from The Ramones to high school bands, and the show’s jazz score has its own legion of devoted followers (many of whom can be found here) determined to preserve the music of Ray Ellis and the session performers whose library tracks made up the soundtrack of the series’ third season. As fun as the show may be, it’s also at times exceptionally goofy. After the first season, the creative decision was made to have Spidey fight villains created especially for the show. So instead of battles with the Green Goblin and Doctor Octopus, viewers suddenly found themselves watching Spider-Man trying to stop a vine creature or an evil ink stain from taking over the city. Once the show became overwhelmed by incoherent psychedelia in the final season thanks to a pre-Fritz the Cat Ralph Bakshi, the magic was gone. But for awhile there, it was a glorious time to be a Spider-fan.

Just so we’re clear, Spider-Woman has had her own show and She-Hulk hasn’t. She-Hulk, who’s really awesome and a lawyer and likes to break the fourth wall and hangs out with Howard the Duck and all, no cartoon. She has to slum it in episodes of the Hulk’s show from the 1990s which are really boring and cause headaches. Anyways, back to the topic at hand: Spider-Woman. This ABC Saturday morning toon from 1979 had Jessica Drew working as an editor at Justice Magazine, which was never featured in the comics, so that’s kinda stupid. For 16 weeks, she got into adventures joined by a photographer and her plucky teenage nephew. If you’ve seen the show, you know how awful these sidekicks are too. Like the completely not-lame Spider-man character (who was apparently contractually obligated to appear in two episodes of this nonsense), Spider-Woman possesses a spider sense that alerts her to danger. But in this cartoon, danger usually took the form of ghostly Vikings or UFOs, which would be cool if they were being fought by a character folks actually give a shit about. Now, She-Hulk taking on ghost Vikings aboard a UFO? That’s entertainment.

Not even the great voice work of Neil Patrick Harris as Peter Parker/Spider-man could save this train wreck of a series that aired on MTV in 2003. Inspired by the Sam Raimi Spider-man films, the show used cel-shaded CGI animation to bring to life Spidey and the gang. The problem is that the show looks awful, even worse than the cut scenes in Activision’s Spider-man game that you used to play on your Dreamcast. Any fans of Aunt May out there? Well if so, too bad. MTV execs decided that viewers would tune out if they saw an old lady on screen. Maybe this is the reason that Aunt May is so MILFy in The Spectacular Spider-Man.

3) Next Avengers: Heroes of Tomorrow

Part Muppet Babies, part undiluted hate, this feature aimed at younger audiences/undemanding viewers transports you to a future where most of the Avengers have fallen in love with other folks from the Marvel Universe, had kids, then died at the hands of Ultron. Before you can say “damn I wish The Muppets Take Manhattan never started this bullshit trend,” a new generation of heroes is being taught by Tony Stark how to save the world from certain doom. Sadly, their training doesn’t involve ingesting copious amounts of alcohol. Wasn’t the whole point of Marvel’s animated DVD features to create films that are aimed at more, for lack of a better term, mature audience? Post-Dark Knight, Comic fans shouldn’t be satisfied with watching Captain America and the Black Widow’s kid getting into scrapes and learning about what it means to be heroic in PG-rated films that are suitable for the entire family. They should only watch flicks featuring violence, adult situations and language, lots of beautiful motherfucking language. So bring on Zombie Spider-Man eating his loved ones and let the kids be happy with My Little Pony DVDs.

Jack Kirby’s hardships within the industry that he helped create are legendary. Yet seemingly forgotten amongst the struggles that tried his very soul was how he was hired to create H.E.R.B.I.E. the robot for The New Fantastic Four cartoon in 1978. You’ve probably heard the urban legend that the Human Torch wasn’t included in the series because producers were concerned that kids would set themselves ablaze. The truth is, the rights for the character were owned by filmmakers looking to create a Human Torch flick a la the Captain America/Dr. Strange telefilms on the late 1970s. Since Johnny Storm was unavailable and Star Wars had just hit, the decision was made to pair up three quarters of the Fantastic Four with a cute robot sidekick whose name was an acronym for Humanoid Experimental Robot, B-type, Integrated Electronics. Fortunately, audiences were having none of this and the show was canceled after 13 mediocre episodes. As for H.E.R.B.I.E. himself, he’s gone on to redeem himself through some cleverly written appearances in various Fantastic Four-related comics, most notably Chris Eliopoulous’ Franklin Richards: Son of a Genuis series of one-shots.

1) Fred and Barney Meet The Thing 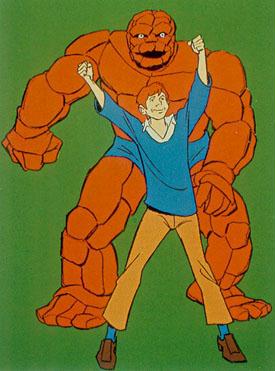 “Thing ring, do your thing.” Those words send shivers up the spine of anyone who has ever admired that ever-loving Blue-eyed Thing, Benjamin Grimm. As if pairing him with a wise-cracking robot wasn’t enough of an indignity for the character to endure, this series made matters worse by having Grimm be a whiny teen named Benjy who uses a magical ring to become his tough alter-ego whenever those bullying Yancy Street boys give him a hard time. For no good reason, these Thing cartoons were aired alongside of Flintstone segments in which Fred and Barney took a backside to a now-teenaged Pebbles and Bamm-Bamm. Exactly why TV execs felt that Fred and Barney should meet the Thing (something that only happened during show credits and commercial bumpers) has never adequately been explained, and probably isn’t even worth investigating. The good news is that at no point did the Thing travel to Bedrock, sparing viewers countless rock-related puns.