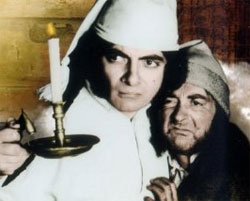 Charles Dickens’ novella A Christmas Carol is a classic of the holidays and English literature. Its simple but uplifting tale of an old, miserly man getting visited by three chronally distinct ghosts and learning the spirit of Christmas has made it the perfect story to adapt to virtually any TV series. Since its publication in 1843, there have been several million jillion adaptations of A Christmas Carol in both TV series, TV movies, cartoons, regular movies, and more, all of which aired in November (it’s also public domain, which means any TV writing hack can blatantly
steal it’s concept and rewrite it to suite their needs and collect
their fat paycheck as a result). Let Topless Robot take you back on a nostalgic journey of just the TV show versions and stop you from bitching about the Muppets, because A Muppet Christmas Carol was a theatrical movie, and you’re thinking of the TV special It’s a Very Merry Muppet Christmas Movie was based on It’s a Wonderful Life (and was awesome and insane, but not appropriate to this list).

The normally jolly and friendly radio station owner Mr. Carlson does a complete 180 and refuses to hand out Christmas bonuses to his misfit staff. After eating one of Johnny Fever’s brownies, Carlson is treated to the typical visits from the ghosts played by the regular cast (this seems to be some sort of TV dogma when swiping Dickens). Loni Anderson plays the ghost of frightening cleavage, and we’re also supposed to believe that a wig makes Gordon Jump look 20-years-old. Venus is the funky ghost of Christmas present and stoner Johnny, in no costume whatsoever, is the ghost of the future–a bleak place where radio is just a sterile corporate machine run by Herb Tarlack, a idiot with no taste. An eerie prophecy come true!

Yuppie in training Alex P. Keaton decides that Christmas is a needless sentimental exercise, which seems the kind of thing to get you kicked out of the local Young Republicans, but no matter. Ghosts that look suspiciously like his awful sisters drop into his room, although Alex a doesn’t for a minute seem bother that his sisters could be dead ( I don’t know about you but if Tina Yothers mysteriously appeared in my house in the middle of the night I’d pretty much do anything she says out of complete fear). Alex is treated a to a future where he’s a bald, overbearing miser who cares little for his destitute family. The fear of future baldness so fills him with the Christmas spirit and he purchases his family a bunch of crappy, thoughtless gifts at the 7-11. Oh, the ’80s. 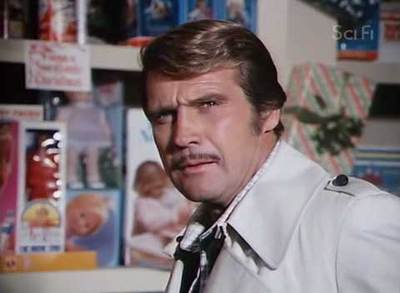 Forced to work on Christmas by his boss Oscar Goldman (who surprisingly is not visited by the Fembot of Christmas Future) Steve Austin becomes sympathetic to the plight of Bob Crandall, a hard working schlub being treated poorly by his employer/uncle Horton Budge. Steve dons a Santa suit and abuses his bionic power to convince Budge he’s the various spirits of Christmas. This episode is notable for Lee Majors playing multiple roles and sporting a godawful Burt Reynolds-like moustache. A cheesy scene in a toy store also has Steve standing in front of a display of Kenner Bionic Man dolls, revealing that the true meaning of Christmas is a good, old-fashioned toy plug.

Ah, leave it to the employees of a dumpy Arizona diner to teach us the true value of the holidays! When Mel, played by TV icon Vic Tayback, fires his staff for refusing to work Christmas eve, he receives a visit from the ghost of his ex-partner (a very rare guest star ghost) and then Mel gives everyone their shitty minimum wage jobs back. Hooray!

Seeing as the original story was British in origin, it makes sense that the Brits would do a great job of turning it around. In this “Episode 3” version of the tale, Ebenezer BlackAdder is nearly wiped out as the other characters take advantage of his giving nature on Christmas Eve. Predictably visited by a single ghost, Ebenezer is shown his somewhat despicable ancestors and  two possible futures, one where he continues to be life’s whipping boy throughout his future generations, and the other where he becomes a total bastard in the present, and his descendants rule the universe. Suffice to say, when BlackAdder wakes up on Christmas morning, he immediately kicks Tiny Tim down the stairs. 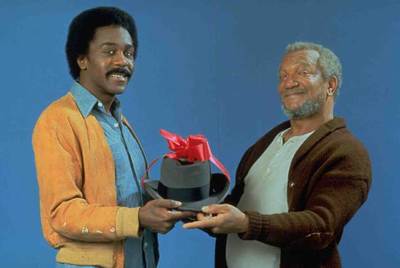 Fred Sanford is cranky, cheap, and wonderfully rude to Aunt Esther and his son’s friends, meaning it’s an average day at the Sanford household…except it’s December 24th. So when Fred goes down to nap, three ghosts visit him. All of the ghosts are son Lamont in budget costumes (Christmas future has Lamont in a stylish spacesuit!). In the end, Fred is redeemed and filled with the Christmas spirit until the next episode when he goes back to being the exact same bastard as always.