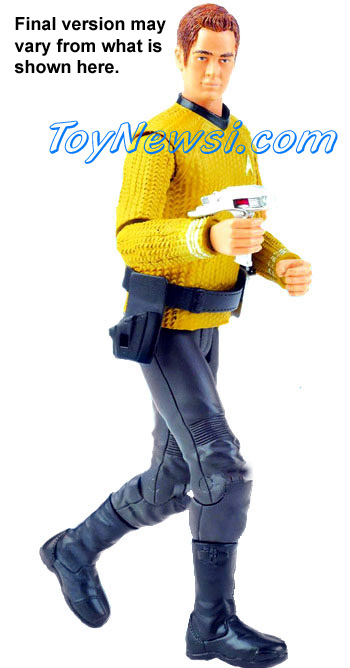 ToyNewsI–which you might have guessed from the enormous watermark–says this is the James T. Kirk figure from Playmates’ upcoming Star Trek movie line. While I’d love to believe it’s some kind of custom figure, I truly believe this is what Playmates would and could be putting out on toy store shelves later this summer. And it makes me sad.

And confused– I have so many questions! Why is Kirk wearing a thick sweater-version of his Starfleet uniform? Why is his head so small, even if he’s wearing a bulky sweater? And who’s head is that anyways, because it sure as hell isn’t Chris Pine’s. (He’s dreamy!)

Man. I didn’t have much of a vested interest in Trek toys, but I had assumed they would be some kind of improvement over the toys Playmates churned out more than a decade ago. I guess we all know what happens when you assume–the asses at Playmates make terrible fucking toys.