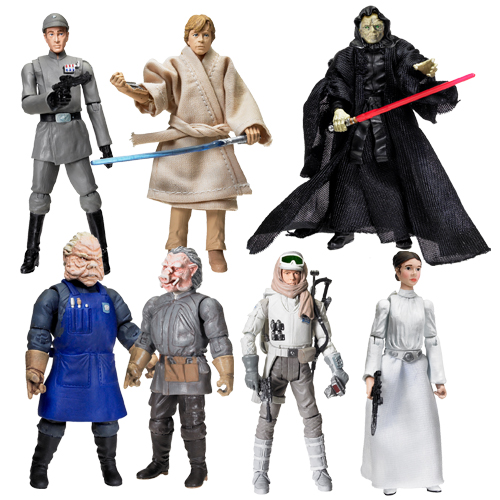 There hasn’t been much Star Wars toy coverage on Topless Robot. There are two reasons for this: 1) I used to have a heroin-like addiction to Star Wars toys and did incredibly depraved things to get them, so seeing all the new toys is kind of like making an ex-addict hold your needle while you tie up your arm, and 2) I’ve had a hard time trying to figure exactly what’s new and what isn’t, thanks to Hasbro releasing several zillion toys per month. However, I have figured out that this wave–specifically, the Legacy Collection Wave 6–are new.

Now, the set is mostly ESB: clockwise from the upper-left is Cap’n Needa, Luke in his flowy medical frigate gown and an open prosthetic wrist, the Emperor from RotS, Leia in her less flowy frigate gown, a generic Hoth Rebel Trooper who looks a lot like Hoth Luke thanks to his scarf (copycat), and two Ugnaughts, who are either not to scale or monstrously large. Entertainment Earth says the set will be out in May, and you can pre-order them here. Now, if you need me, I’ll have chained myself up in my basement to prevent myself from heading to Toys R Us.