Assumably talks between Fox and Warner Bros. are still going well–the heads of the two studios were seen laughing together at the Golden Globes, which probably means nothing but we can still pretend it’s a good sign if we want–so we might as well keeping hoping/guessing Watchmen will be released on time in March. WB obviously feels good enough about it that it played this new commercial for the movie several hundred times during the pricey spots of the NFL playoffs and the 24 premiere, which is almost certainly a good sign especially since both were on Fox. But speaking of the NFL playoffs…hey, where are you going? This is nerdy, I swear! 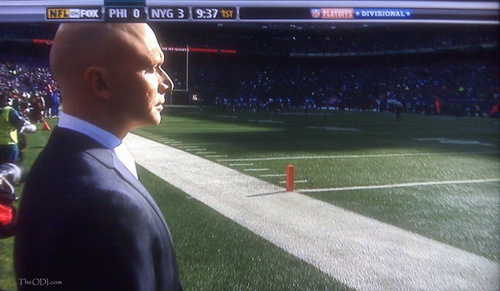 Recognize this dude on the sidelines at the Eagles/Giants game? You do if you watch Fringe, because he’s the weird bald dude shows up to watch most of Fringe‘s wackiest events. It was actually kind of cool, since Fox’s camera suddenly brought up this shot, cut away, and no one on air mentioned it in any way. I’m assuming he was there to watch my beloved Giants and their supernaturally hideous pants-wetting against the Eagles. (Via Shutdown Corner)