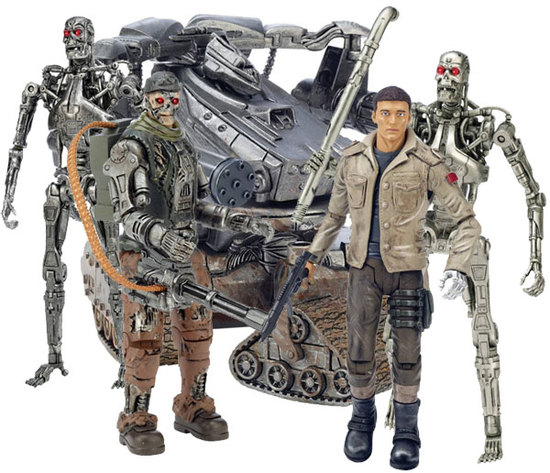 Playmates has Skynet’s time travel technology. That’s the only way they could be bringing out these action figures for the upcoming Terminator: Salvation movie, which were clearly made sometime in the ’80s. Look at the lazy sculpting–that’s supposed to be Christian Bale as John Connor, by the way, on the right–on these 6-inch figures. You cannot convince me they were made with today’s technology. Hell, Action-Figure points out that they look slightly worse than Playmates’ Virus movie toys from 1999 or so. Head over there to see both the 3 3/4-inch and the 10-inch figure sets, both of which are even worse-looking than these.

Remember, Playmates also has the new Trek movie toy license, and if these things are any indication, you might as well just hit the flea markets for Playmates’ old Trek toys. They won’t look any different. Maybe Playmates is spending all their cash/talent on Trek, but…that’s some seriously wishful thinking right there.
Tweet Pin It