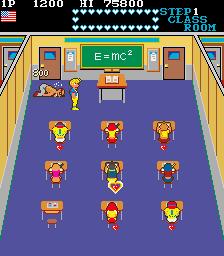 The 1980s. It was a decade when elderly women could become superstars merely by complaining about the size of hamburgers. A time when the words “guitar hero” only conjured up mental images of Eddie Van Halen. A simpler era when Star Wars fandom was not only acceptable, but encouraged. Sadly, the ’80s are long gone, and all the collectible He-Man figures in the world can’t change that. Sigh. From a nerd’s perspective, it was a great time to be alive–largely in part due to the rise of the video arcade. For a brief moment in history, videogames helped cross societal boundaries to unite us all. Regardless of age, racial background or sexual orientation, people everywhere could enjoy a game of Space Invaders. The only trouble is that most of the games from the classic era of gaming (from the dawn of 1980 right about to when the NES hit big time in 1987-88) were really strange. It may have been great fun to play Dig Dug, but have you actually thought about the impact that destroying Pookas may have had on your prepubescent self? Most of the time, arcade games were completely shithouse bonkers, completely devoid of any logic or reasonable goal. Which just adds to their awesomeness. Here’s a look at 10 classic games that are as confusing as they are incredible.

The Halloween III of video games, this third entry in the Donkey Kong saga replaced Mario with an exterminator named Stanley who is trying to rid his greenhouse of the big ape. Like the deep-sixing of Michael Myers, people weren’t happy about this change either. If you can overlook the game’s complete lack of the stereotype-reinforcing plumber, you’ll be rewarded with the surprising pleasures that shooting insecticide up Donkey Kong’s ass has to offer.

What the hell is Q*bert anyway? His true origins are as mysterious as the carefully placed asterisk in his name. Here’s what we know: he’s an orange bulbous fellow who is forced to spend eternity jumping around a pyramid-shaped screen changing the colors of blocks while a snake and other various assholes try to screw with him. So is it any wonder he’s screaming profanity all the time?

According to this 1984 oddity from Konami, romance and violence go hand in hand. In the game, you portray the titular character, a blonde pretty boy who wanders around his high school collecting hearts that are actually pieces of a letter written to him by his girlfriend. With school being hell and all, he is pursued by various staff members, football players and the bitchiest dance students this side of Fame. This all sounds pretty lame until you take into account that you ward off your various enemies by throwing things and headbutting them. Imagine how great high school would have been if you were able to inflict head-on-head injury to that jackass who failed you in chemistry or the gym teacher who insisted on trying to make you put the basketball through the hoop thingy when you’d rather be daydreaming about Spider-Man. Mikie is nothing less than pure wish fulfillment, even if the main object of the game is lame. And yes, that is The Beatles’ A Hard Day’s Night you hear on the soundtrack. Was the track authorized, or used illegally to reinforce the game’s rebellious ideology? You decide (although it was obviously illegal).

The most disturbing revelation of the Pac-Man cartoon series was that Pac lead a relatively normal domestic life, minus the whole evil wizard who lives nearby and controls phantasms thing. So, if the TV show presents an accurate portrayal of his daily life, then what exactly is going on in the game? Are his arms and legs removable? Is Pac-Man’s job to go around a maze all day and eat power pellets? If so, why don’t the ghosts realize that their gig sucks and unionize? Or, even odder, does Pac-Man just do it secretly for kicks while Pepper stays at home dealing with all of Baby Pac and Chomp Chomp’s bullshit? Before the Pac-Man/Don Draper comparisons begin, it should probably be mentioned that things go from strange to downright Lynchian in Pac-Land. In the platformer, it is revealed that our yellow hero keeps a fairy under his hat whom he must return home to Fairyland. Huh? Once he accomplishes this Homeric task, he is given a magical pair of red boots to help him on his journey back home. Again, huh? One cannot even begin to imagine. Regardless, it sure is fun to see Pac-Man strutting around the streets of his town–even if he is up to all kinds of no good.

Created by the same team responsible for Tapper and Timber (and featuring a main character who looks eerily familiar to fans of those games), this 1983 release from Bally Midway is so insane that it features, wait for it, poetry and dominos! As you try to set up a domino display, bullies, killer bees and troublesome bystanders undo your work. If you somehow get to line up all of your dominos, you have the pleasure of knocking them all down and moving onto the next board. At the end of the game, players have their progress analyzed through on-screen poems. Not e.e. cummings-quality stanzas mind you, but they are pretty good for an obscure videogame.

Imagine playing Donkey Kong Jr. while suffering from a gaping head wound, and you will begin to grasp what the Minky Monkey experience is like. Controlling what appears to be an anthropomorphized apple core, players must complete the tasks assigned to them by a monkey who has acquired a firm grasp of the English language before they can advance to the next level. Were it not for the widespread availability of ROMs on the Internet, Minky Monkey probably would have be forgotten. The lesson to be learned here is that if you are going to have an obnoxious simian be the villain in your videogame, be sure to give players the opportunity to beat the piss out of it or risk being relegated to the annals of obscurity.

Having worked as a short order cook, I am pleased to say that I was never chased around by sinister eggs, pickles or hot dogs. Which is a shame, because I imagine that it would have broken up the monotony of the workday. Easily the most fun game on this list, if not the most popular, Burgertime is a true arcade classic. And let’s not forget that terrifying commercial for the Intellivison port of the game:

There’s really no good reason why Burgertime‘s hero, Peter Pepper, isn’t a gaming icon a la Mario or Sonic. But that’s not his style. He doesn’t call OSHA about the unsafe working conditions, he just wants to make it through his shift before going home to a case of Bud and a Tivo packed with Ice Road Truckers episodes. Peter’s a man’s man. He doesn’t desire the spotlight or to star in new games. All he needs is a bun to run across and the hope that each day will bring some new burgers to build.

“Welcome to the fantasy zone!” When Sega unleashed Space Harrier upon the public in 1985, the game’s 3-D backgrounds and memorable villains–especially those ever-present Easter Island heads–were unlike anything seen before at the time. Viewed upon by jaded 2009 eyes, Space Harrier seems repetitive (just try sitting through all 8:47 of the above clip) and responsible for ushering in the age of the button-masher. But at the time of its initial release, this was a game that helped briefly revive an industry that had already started its slow march towards oblivion.

The Three Little Pigs fairytale got a makeover for the video age in this 1982 Konami release. In an effort to get her kidnapped piglets back, a mother pig goes all Rambo on the not-so-big-or-bad wolves responsible for taking her kids by trying to shoot arrows at them and the helium balloons they fly around in. In the game’s twisted logic universe, female pigs have great archery skills and the word “pooyan” refers to the abducted lil’ piggies, and not genitalia.

There was a Journey arcade game. For a quarter and a smile you could share the night uh…journeying with mini digitized versions of Steve Perry and the rest of his awesome-haired bandmates. It doesn’t matter that it wasn’t too much fun or that it set a precedent that also gave Michael Jackson, Aerosmith and Kris Kross their own games. What’s important is that it was Journey, and they were in a videogame that featured their own songs–including “Separate Ways” that would play through a cassette deck built into the cabinet. The only thing that could have made the game any cooler would have been if it were based on a band that you weren’t ashamed of liking. Trivia: if you own the cocktail table version of this game, chances are you are either awesome or the biggest hipster douche bag who ever lived.