Monopoly is debatably the most frustrating mainstream board game in the world. Created in a time when Americans played games to escape woes wrought by the Dust Bowl, a militarizing Germany and migrant farm work, Monopoly was a great way for families to pretend they actually had money for an extended period of time. Given this century’s steep economic downturn, what better time than now to revisit the popular time-waster and celebrate its many forays into nerd territory with a list of some of the board game’s nerdiest game tokens? There are simply too many cool options to keep playing with a thimble. Read on to reaffirm an unhealthy appreciation for pushing pewter-cast shapes past Go and collecting $200.

Thanks to Michael Bay, by now everybody is pretty familiar with Autobots and Decepticons. Even two years after the film’s release it’s impossible to swing a dead Jazz without hitting some Optimus Prime or Megatron merchandise at a big box store. Lucky for nerds, Monopoly wasn’t corrupted by Bay’s lunacy and contains tokens based on classic character models. While all of the pieces look good, Starscream gets the most cred for his sheer smug bastardry (it’s not a real word here, but it’s quite common on Cybertron).

Muppets and super heroes each get their share of love here at TR, so it should come as no surprise to see this magnificent amalgam make an appearance on this list. Super Grover embodies everything that made pre-health nut Cookie Monster Sesame Street great. He’s faster than lightning, stronger than steel and smarter than a speeding bullet. Why, there’s no Sesame Muppet better suited to absentmindedly crush his foes by claiming the most valuable properties on the board. 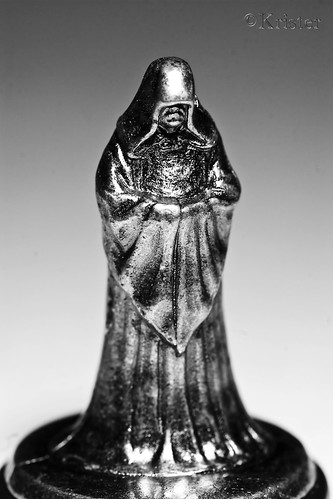 Star Wars has inspired several Monopoly sets over the years, with character tokens culled from both the original trilogy as well as the prequels. Every piece is nerdy, but there’s nothing nerdier than using Palpatine himself to build a financial “Empire.” It may seem like an oversight to pick ol ‘Sidious in place of the more obvious choice of Jar Jar Binks, but everyone knows that piece gets thrown away immediately upon opening this super bombad game. 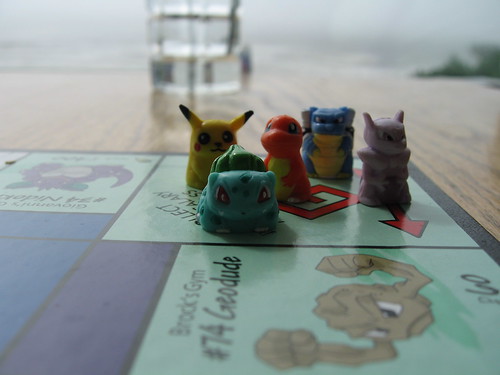 Though an earlier 1999 version included non-painted metal pieces, the colorful cast in 2001’s Pok?mon Monopoly takes the cake with bright little buggers plucked straight from the original RPG. Pikachu isn’t necessarily the coolest (that spot should probably go to the pewter version of Snorlax from the 1999 game), but given his history of abuse under the tyrannical Ash, the electro mouse deserves this consolation prize.

Casting off the pewter shackles of American tradition, these game pieces were pretty much the same Ultraman token cast in differing hues of translucent neon plastic. Given Ultraman’s popularity in Japan, this version of Monopoly is logical from a marketing standpoint, but the true potential for traditional gameplay ends there. Building houses and hotels? Out of the question. Every single property on the board stands to be devalued exponentially with each monster-battling lap around the board by Earth’s shiny protector.

The unsung voice of a generation, Nintendo Entertainment System’s simple gamepad is a fine choice for a Monopoly token. It’s simple, iconic and inherently immobile like many of Monopoly’s classic game pieces. Best of all, the NES gamepad token is a kind of sweet redemption for anyone who wasted time trying to play the NES Monopoly video game (which is essentially more frustrating than it’s board game counterpart), recombining the two elements into something tolerable and even nostalgic.

4) Wesley Crusher from Star Trek: The Next Generation Monopoly

Plenty of people dismissed Wesley when he was ensign of the USS Enterprise, but his dues ex machina genius is just the strategic advantage every good Monopoly player needs. Think about it. After all of the smarter, more qualified Monopoly players become confounded by Monopoly’s inherent tedium, the player using the Wesley token will somehow come up with the perfect idea to instantly win. The cost of victory is high however, because just like the real Wesley, everyone will resent them.

Want to spice up a game that goes nowhere with murder and mayhem? Just throw in a few of the weapons from “Clue,” that other glacially-paced rainy day ruiner! Why there’s no better way to celebrate the cutthroat world of capitalism than with these death-dealing devices! There’s a revolver, a lead pipe–even a knife for backstabbing. However, in keeping with Monopoly’s pewter token tradition, it might be a good idea to throw out the plastic noose – or better yet, just play Clue instead. It may take awhile, but the satisfaction of: 1) Knowing someone paid for hours of personal frustration with their lives and 2) Hunting down the jerk responsible for it, is enough to bring a smile to the dourest of faces.

2) Anybody from Lord of the Rings Monopoly

From Gandalf to Gimli, this set is a fantasy fetishist’s buffet. It’s been a few years since the height of LOTR‘s movie-inspired popularity, making this Middle Earth board game nerdier than ever. It’s impossible to single out a LOTR character that’s somehow geekier than the others. Gandalf is a wizard, Legolas is an elf, Gimli is a professional wrestler, Aragon is friendly with elf women–the distribution of nerdiness is just too equal to declare a winner. It’s possible to simply use the One Ring included with the game as a token, but it’s not advised since players who do turn invisible and get stabbed by the ghosts of ancient kings.


There have been many wacky novelty Monopoly tokens: wooden tokens, plastic tokens, golden tokens – even edible chocolate ones. However, nothing tops biological tokens. Don’t get the wrong idea, contestants of 1990’s Monopoly game show didn’t actually walk around the board (a light would mark their location), but there’s something almost cautionary about a live-action version of a board game marathon. Even though the rules and gameplay were modified to make the game both winnable and watchable, somehow the contestants seemed miserable despite their potential cash prizes. The show was dropped after just three months proving that it’s impossible to inject humanity into the beast that is Monopoly. Better to feed it fan-favorite geek media properties and play along with what drops out.