Menu
Home
>
Comics
>
We Can All Watch the Goddamn Watchmen (Updated) 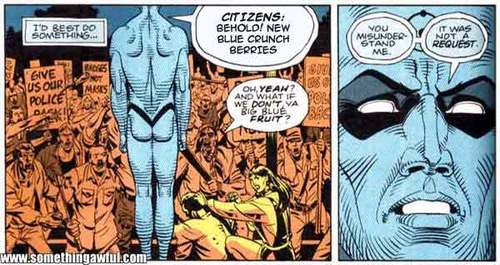 UPDATE 10:12 PM: It’s official–Fox and Warner Bros. have settled their pesky lawsuit, Warner will give Fox some cash, and we can all watch Watchmen as planned on March 6th. The studios will present their settlement to the judge on Friday, and ask that the case be dismissed. Sez THR:

Terms of the agreement will not be disclosed, but it is said to
involve a sizable cash payment to Fox and a percentage of the
film’s boxoffice. Fox will not be a co-distributor on the film, nor
will it own a piece of the “Watchmen” property going forward. The
studios are set to release a joint statement announcing the
agreement Friday

Finally, our long nerdy national nightmare is over. Back to bitching about the squid.

As several hundred of you have noted, something’s happening in the twisted world of the Watchmen movie lawsuit between Fox and Warner Bros. today. Basically, the two studios have filed a Notice of Settlement Status, which means things aren’t quite solved, but it’s darned close. THR says:

According to the filing, the parties are “continuing to address a few
remaining settlement issues” and have requested a hearing today at 3:30
PM “to report on a final resolution or, alternatively, to discuss how
to proceed on January 20, 2009.” Nothing like deadlines to get the ball
rolling.

The reason I waited to post this at the end of the day is so that I can update it immediately after 3:30 PST, assuming there’s something to report. It could be settled in a few hours, or they might need some more time. However, I’ll update this sumbitch either way, so feel free to bookmark the link. Meanwhile, feel free to dance with joy and/or get back to worrying about GiantAlienSquid Gate–overall, this is a very good sign. (And if you missed it last time, the pic is from SA’s old Watchmen Photoshop Phriday.)