Menu
Home
>
Cartoons
>
Well, We Can Forget About the Jonah Hex Movie 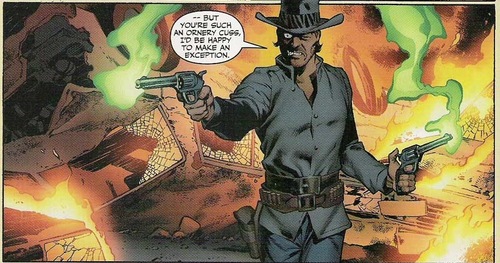 When Warner Bros. was talking about which DC superhero would star in their next film, they mubmled something about Green Lantern. They didn’t mention Jonah Hex, the facially-challenged gunslinger who shot the hell out of the supernaturally wild west, whose movie has been on track for most of the year. Apparently, the Warner exec was forgetting him on purpose, because since the movie last made the trades, the directors have dropped out, to be replaced by the guy who did Horton Hears a Who. From the Hollywood Reporter:

Jimmy Hayward, who directed the animated “Horton Hears a Who!” will
make his live-action debut with “Jonah Hex,” the Warner Bros.
western based on the DC Comics character.

Josh Brolin is attached to star in the film, which previously had
Mark Neveldine and Brian Taylor (“Crank”) on board as directors.
The duo, who also wrote the script, bowed out over creative
differences in November. The studio, which hopes to put the movie
into production in March or April, went on a fast-track search,
putting together a short list that included such names as Andy
Fickman and McG before narrowing it down to Hayward.

I’m sure Hayward is a nice guy. Probably talented. I’m told Horton Hears a Who is a actually a pretty good CG kids’ flick, actually. Does any of this make him at all qualified to direct a halfway decent Jonah Hex movie? Not in the slightest.