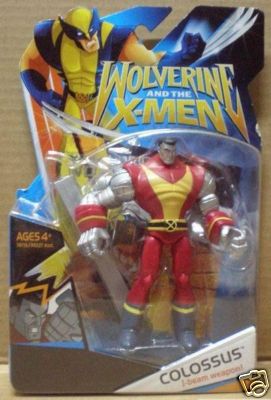 No one should be surprised that Hasbro is making toys for the Wolverine and the X-Men cartoon; it’s a cartoon, it’s X-Men, of course merchandising is half the point. However, I am mildly surprised that these toys are getting into the hands of Hong Kong eBay sellers before the toys have actually been announced. Usually the announcement comes first, then Hong Kong/eBay, then U.S. stores. Weird.

So if you check here, you can see auctions for Beast, Colossus (both above) and Avalanche. I’ll make an educated guess and say that there’s at least a Wolverine and a Cyclops in the first wave, but there’s no way there’s a White Queen (she’ll be in a barely released third wave, if history has taught s anything). Since these are in package, they have to be close to shipping to the U.S., so expect to see them not long after the cartoon debuts on NickToons on January 23rd. Much thanks to Great White Snark for the tip, and thanks to eBay seller Dreamcab for announcing these things, as Hasbro obviously wasn’t going to.