Menu
Home
>
Cartoons
>
The 10 Most Notable Deaths of Optimus Prime

Good old, noble Optimus Prime is certainly the most important character in Transformers history,  as not only the leader of the Autobots, but also having appeared in every version of the story in some form. Unfortunately, he’s also the unluckiest Transformer, as writers have unmercifully killed him in virtually all those series, meaning the heroic truck/monkey/robot has been murdered on-screen just a bit less than Kenny on South Park. Some of these death scenes have been riveting and emotional, have shown Optimus at his noble, sacrificing best. Others, well… others have been plain embarrassing — not just for Optimus, but all the writers and artists involved. Here are ten times Prime has kicked the rust bucket (although there’s sure to be more), ranked from worst to best. 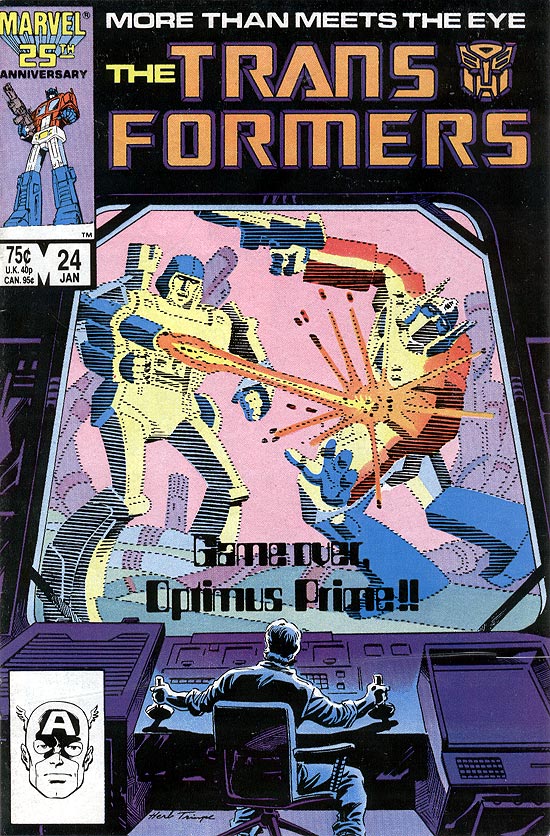 Marvel’s Transformers comics were edgy, weird and sometimes brilliant, but they were marred by a few moments bad enough to drive you to set fire to your ultra-expensive Fort Max figure. The worst moment was the first of several deaths of Optimus Prime seen in the comics. The hare-brained plot had a computer programmer convince Optimus Prime and Megatron to wage battle within a video game, with each combatant wired to explosives that would result in the death of the loser, in order to prevent the collateral damage that would have occurred otherwise. Megatron of course found a way to cheat, and Optimus only won by taking out Megatron along with a bunch of blob-people who resided in the virtual world. So upset that his desire to defeat Megatron had resulted in the death of those he had sworn to protect, Optimus ordered the computer programmer to blow him to high heaven. Yes, Optimus Prime basically committed suicide over the death of innocent computer pixels. A lamer death for such a great hero as Optimus Prime is hardly more imaginable. However, the computer programmer assured Prime’s return by copying his mind… to a five-and-quarter-inch floppy disk. *sigh*

9) Transformers Animated, “Transform and Roll Out”

The Transformers Animated version of Optimus Prime made a great first impression. Not only was he inexperienced and an outcast, but he managed to get killed in only the third episode of the series (and the first story, for that matter) when his battle with Starscream high in the sky ended with Optimus going splat on the pavement. Promptly, he turned gray and died. But thankfully, a little girl and her magic key were there to save him. Dying this quickly in the series made Prime seem weak and fragile, and detracted from the dramatic impact of any death of his that was bound to come later.

Transformers Armada was such a bad show. It was a festering example of the worst clich?s of English-dubbed anime. If you despise characters that constantly make gasping noises, say “Huh?” and yell; an obsessive focus on power moves and the tiresome announcement of each one; annoying kids; and robots that act like they’re 12 years old, then avoid this show at all costs. The Optimus Prime in this universe managed to die while heroically saving Earth by jumping in front of Megatron’s super-cannon, then niftily shattered to bits (later to be rebuilt by those stupid Mini-Cons). While it could have been a cool scene, every bit of it is marred by the awful traits described above.

The Japanese Generation 1 Transformers cartoons are an odd parallel universe. They look a lot like the American G1 cartoons, but continued the story in a way uniquely Japanese and depressing after the American seasons ended. The Japanese writers wasted no time in killing off Optimus Prime again, apparently seeing his revival in the American Season 3 finale “The Return of Optimus Prime” as an annoying roadblock to Hot Rod being leader. In the third episode of Headmasters, the first Japan-exclusive Transformers cartoon, Hot Rod got his grubby hands on the Matrix again and turned back into Rodimus Prime. Briefly, he fought side-by-side with Optimus Prime against Galvatron and the Decepticons on Cybertron. Then Vector Sigma, a huge power source, began to malfunction and threaten the planet. Optimus leapt at it, merging his spark with Vector Sigma to save his home planet, and unceremoniously dropped dead in the process. This noble sacrifice was mostly worthless, as Cybertron was blown up by the Decepticons a few episodes later. What a cheery place the Japanese Generation 1 universe was! Powermaster Optimus Prime showed up later, but was actually a human controlling a lifeless body that looked like Prime. By the time the real Optimus came back to life, it was within the pages of manga since the Japanese cartoons had been canceled by that time.

With an alien space weapon about to destroy the planet, Optimus Primal heroically piloted a pod up into the sky to destroy it. But the nefarious Megatron had rigged the pod so that Optimus couldn’t escape, making him go kablooey along with the alien weapon. Taunting Primal over the vidscreen, Megatron even commented on the frequent fatalities of characters named Optimus. “Oh, you Optimuses do love to sacrifice yourself, don’t you?” he said with a cackle. This “GOTCHA!” Moment underscored what a delightfully scheming villain Beast Wars Megatron was. Optimus would return, of course, his spark reunited with a spiffy new body.

Beast Machines wasn’t a perfect show, but it did manage to offer a suitably epic conclusion to the Beast Wars saga. During the course of the series, Optimus became a Zen master who believed in harmony between technological and organic life. Megatron became the totalitarian emperor of Cybertron who planned to eat the population’s souls, become a god, and destroy all organic matter on Cybertron. Not willing to let that happen, Optimus tackled Megatron and drove them into the core of the planet, causing a reaction that killed them both but reformatted Cybertron into a harmonious mix of techno and organic, and returned the planet’s inhabitants to life. 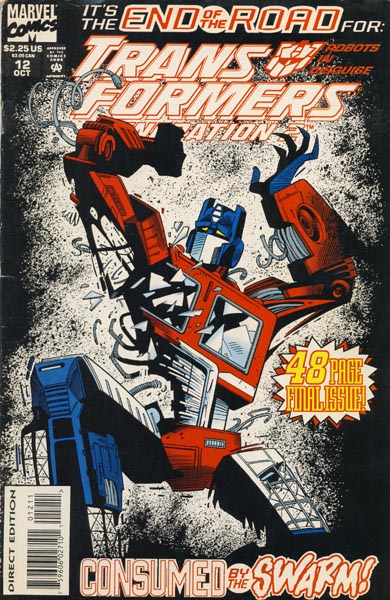 The Swarm was a black cloud of hate that ate everything in its path and was inadvertently a
byproduct of Transformer-kind. After it had eaten way too many aliens beings and Transformers, Optimus sacrificed himself to the Swarm, letting it consume him, but knowing that the goodness of the Matrix would purify the Swarm. It worked, and the Swarm went on to create life throughout the universe instead of destroying it. It also paused graciously to reconstruct Optimus Prime, and he went on to give an inspiring speech that closed out Marvel’s Transformers universe.

If you thought kids were traumatized when Optimus Prime bought the cyber-farm in Transformers: The Movie, imagine how horrified they were when he came back as a zombie in “Dark Awakening.” This awesomely creepy episode of the third season of Transformers might be the most terrifying cartoon ever aired on weekday afternoons. Fleeing from the Decepticons, the Autobots hid out in the spaceborn crypt that held all their dead, one of whom fell out of his coffin and almost crushed Daniel Witwicky. (Damn! So close!) The Autobots were stunned when the shattered body of their fallen leader Optimus Prime arose to help them, then suddenly beat the crap out of Rodimus (likely for causing Optimus’ death). It turned out that Optimus was only half-alive, reanimated by the Quintessons to lead the Autobots into a trap. Optimus came around, and the last shot viewers saw was of Optimus Prime with his face half ripped open and one arm missing, valiantly piloting the crypt ship into the trap and saving the rest of the Autobots. One massive explosion later, kids were once again left hysterical as their hero met his untimely end. Damn, what a cocktease, cartoon writers. They did finally give in and bring Prime back for good, though.

There’s a lot wrong with Transformers: The Movie, primarily how all the heroes and villains kids grew to love were cut down by injuries far less serious than anything they had endured in two years of cartoons. Sure, it was all a marketing ploy to push the toys for the crappier new characters. But there were some moments that transcended the movie’s toy commercial status, and those scenes involved Optimus Prime. First, he showed up during the Battle of Autobot City and single-handedly saved the day by taking out about 65 Decepticons. He then engaged in an epic fistfight with Megatron, knocking the crap out of the Decepticon commander. After all that inspiring action, though, Prime succumbed to his injuries in a scene that both saddened and shook up a generation of children, made even the more powerful by Vince DiCola’s musical score. While it was awful that Prime died in the first place, the infamy and strength of that scene lives on. 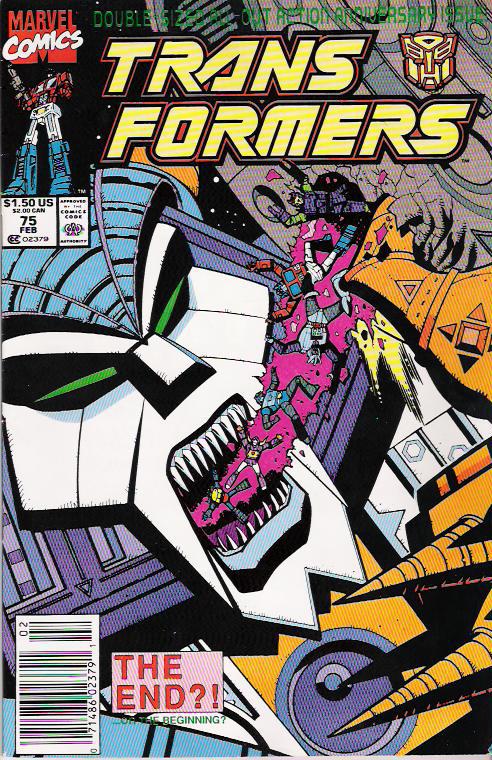 If you were disappointed that Optimus Prime didn’t get to kick ass and takes license plate numbers during the big battle with the planet-eating Unicron in the movie, Marvel’s comic book made up for it. The Transformers stories set in the futuristic world of 2006 were mostly ignored in the comic books, so it caught fans off guard when Unicron unexpectedly showed up to menace Cybertron in the comic’s present day, several years after the movie came out. Writer Simon Furman spun a tale that brought Unicron, Cybertron and the Transformers together as part of a mythology. When Unicron finally reached Cybertron (the inert form of his godly nemesis Primus), Primus drew together all his “children,” the Transformers, for an epic last stand against the gigantic monster. An awesome battle was waged, and it was settled when Optimus Prime himself, not Rodimus like in the movie, opened the Matrix of Leadership. Optimus flew right into Unicron’s maw and used the Matrix power to blow the chaos bringer to bolts and bits. Optimus died from the encounter, but was soon brought back as his soul had merged with the soul of his human partner, Hi-Q, and the two were forged together into a new Prime. This was the heroic, meaningful, explosive death that Prime always deserved.