Like any success story, the Transformers toys have led to countless imitators. Back in the ’80s, when Hasbro’s robots in disguise were in the first height of popularity, the Autobots and Decepticons filled the good aisle at Toys R Us…but walk around to the next aisle over, and you would find all the weird, off-brand toys that were made to cash in on popular trends and were most likely D.T.O. (Destined To Obscurity). The numerous robot toylines that magically sprung up in the mid-1980s after Transformers hit it big could fill a book, but here are the 10 most excellent examples of toylines that tried to rip off Transformers and failed miserably. 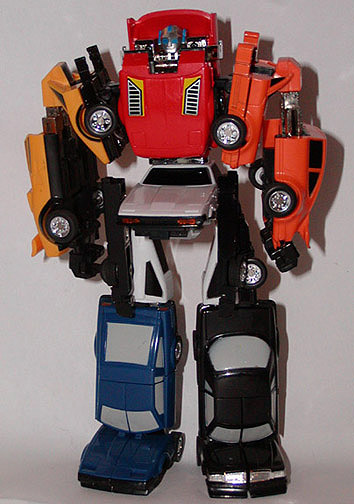 Before any of you 8 hardcore GoBots go into a nerd rage and slam your mouse cursor into the comment button, hear me out. I know that Transformers and GoBots debuted at about the same time and neither one can truly be said to have ripped off the other. Tonka’s GoBots managed to last a respectable amount of time on toy shelves but it was eclipsed by the success of its main competitor. Perhaps it was because Transformers had more compelling fiction and more larger, sturdier toys than Gobots’ main line of Hot Wheels-sized characters. Whatever the case, Tonka had to do something to compete and tried, in its own way, to emulate the play features which brought success to Transformers. After Hasbro hit it big with combiner teams like the Constructicons, Aerialbots and Stunticons, GoBots tried the concept with Puzzler, Monsterous and Power Suits. GoBots also released larger, deluxe versions of many characters that were closer in scale to most Transformers. Alas, GoBots vanished off store shelves in 1987, while Transformers in some form have remained to the present day. In a later indignity, Tonka was bought out by Hasbro. The GoBots live on somewhat in occasional homage toys in the Transformers line and as cannonfodder troops in a few Transformers comics. 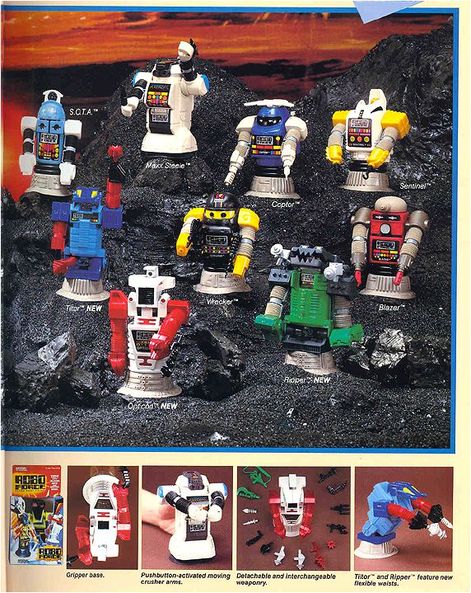 Ideal’s Robo Force was another awesome, short-lived toyline that copied the idea of two factions of robot warriors battling each other. The fat, cylindrical robots didn’t transform, but featured suction cups instead of legs, arms that waved around when you pressed a button, and various hidden weapons and other gimmicks. They also had some cool vehicles and bases. The biggest celebrity from Robo Force was Maxx Steele (no, not the hero from early-2000’s CGI series Max Steel), the leader of the good guys, who was also available in a larger scale as an actual, working robot that every kid on the planet desired. Give Transformers all the credit they deserve, but Hasbro never gave kids an Optimus Prime that could walk around their homes and serve drinks. 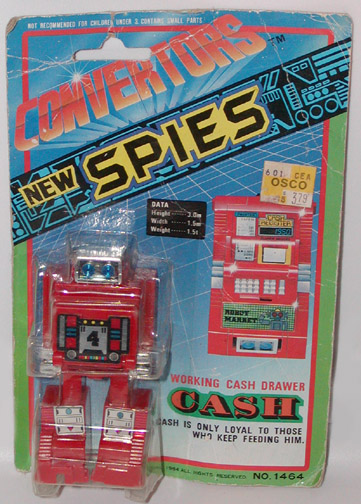 Most boys in the 1980s had at least one mysterious transforming robot in their collection they knew wasn’t a Transformer or a GoBot, but had no idea to which toyline it belonged. These figures were usually given as presents by cheap and/or clueless relatives because they knew we liked Transformers and thought any robot that could turn into a car would do. For many of us, these toys usually became the less famous, nameless denizens of Cybertron. There’s a good chance that some of those mysterious robots were Convertors. Although they had no comic book or cartoon to depict their battles, there were over 30 Convertors toys released and they sported some nifty designs that often had a crazier aesthetic than the Transformers. And they went places Transformers didn’t touch, like having robots that turned into slot machines. The Convertors licensed some designs from Bandai just like was done for Transformers, meaning some of the toys looked eerily like the Deluxe Autobots, Deluxe Insecticons and Jetfire. Convertors even had knock-offs made of them!

Those unknown Transformers in your collection also might have been Remco’s Zybots. While somewhat GoBot-like, they had unique designs and features, like a fire truck that had a different robot on its front and back when transformed, and a very odd Zybot combiner.

The Starriors were robots created in three different classes (Protectors, Guardians and Destructors) to protect a hibernating humanity, restore Earth and defend against potential alien invaders. But battle began among the robots when the Destructors revolted due to fear of being deactivated upon the return of humans. The toys were very cool, with parts that could be exchanged between robots and motorized features (which makes sense, since they were an offshoot of Zoids). Like Transformers, some of the toys were available in different color schemes as different characters. Also like Transformers, they had an awesome Marvel comic book. But the Starriors did not meet the same success, and this extremely cool and offbeat toyline was left in the dust of the deserts in which its robot warriors fought.

Marchon’s Road Bots were a bit of a cheat. While being motorized was a nice feature, you had to take the robots totally apart to transform them into construction vehicles. Each toy was also sold in many different color schemes. But Marchon was awesome for either their total audacity or utter cluelessness in naming one of the figures Hookorr, as seen above. Even better, Hookorr was “friction motorized.” Did these robots have a side profession they wanted to tell us about? Talk about more than meets the eye!

If GoBots were the K-Mart Transformers, than Robo Tron was the Third World Flea Market Transformers. Buddy L tried really hard to f
orge their way in the robot-to-car genre, but ended up with what looked like GoBots that came from gumball machines. They even ripped off a few GoBots designs along the way and released some oddly familiar Dinosaur robots. But it’s okay, because the Robo Tron toys had their own charm and bring back nostalgic memories for those of us who had them. They also featured pull-back action and both good and evil versions of many of the toys (repaints). 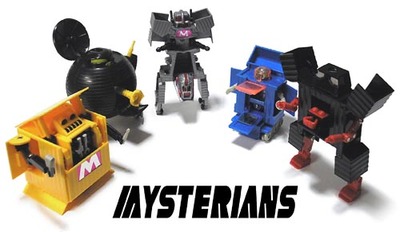 Marchon wins the prize for the most oddball transforming robots. Its short-lived Mysterians line featured a group of six strange ‘bots who turned into geometric shapes. They had cool-as-heck accessories, like a fix-it robot with a bunch of tools in his chest and a navigator robot with a hot pink viewscreen and maps stored in his innards. These robots came and went in a flash, their story as mysterious as their name in the minds of the few kids who had them. Of interest, though, is that they seem to be the soul brothers of similar robots in Japan’s Chogokin Mechanic Lightan series. 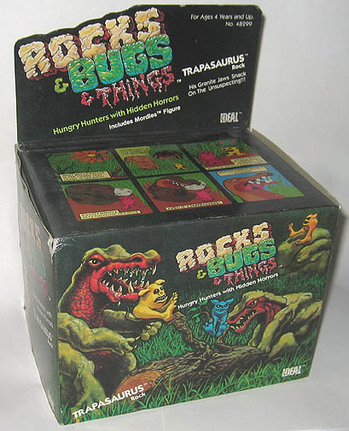 And the award for most oddball transforming things goes to Ideal for this toyline. It features horrific insects in combat with rocks that transform into horrific monsters, each trying to eat as many hapless, Gremlin-like Mordles as they can fit into their jaws. It’s a truly disturbing toyline that spent about five seconds on the shelves. And speaking of rocks… 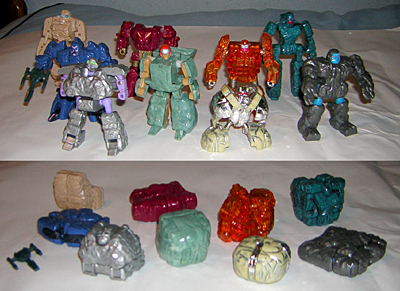 Sure, they were an offshoot of GoBots. But this toyline was such a bad idea that it does not deserve to tarnish the good Gobots name by being lumped in with them. In a desperate bid to try and keep up with Transformers, Tonka execs must have figured that kids would buy anything that transformed. And hence they made transforming rocks. There were rocks of all types, even gemstones! This toyline must have inspired at least one future geologist. Thankfully, Rock Lords wasn’t successful enough to spawn The Battle of the Amazing Clods of Dirt.