The year was 1999. Nerds everywhere were convinced that Star Wars: Episode I: The Phantom Menace would bring meaning to their otherwise worthless lives. So great was the anticipation that fanboys considered buying stock in Hasbro to profit from the billions the company would surely make once toys from the flick were released. But dreams of an action figure-induced windfall were soon buried by the sight of Ric Oli? warming the pegs at toy stores across the country. Just as man must learn to accept his own mortality, Star Wars fans were forced to confront the ugly truth that the prequels just weren’t going to be worth the wait. With the 10-year anniversary of Episode I swiftly approaching, it’s time to look back upon a decade of prequel toys. A quick disclaimer though: all of the figures on this list are based strictly on the live-action films, which means the ridiculing of the Stinky the Hutt toy and other expanded universe crap will have to wait for another day. So, here’s the 13 biggest plastic horrors spawned by Episodes I through III. Like Al-Qaeda these toys hate freedom and must be stopped. 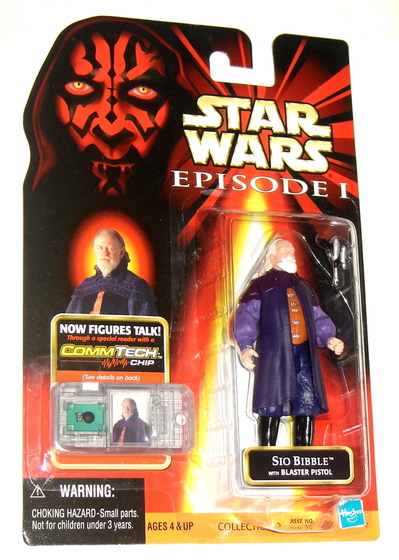 Sio Bibble’s appearance on this list can mean only one thing: invasion!  Or it can mean that kids don’t want to play with action figures of old men who aren’t Obi Wan or Gandalf. That goes double for those based on alarmist governors who do little more than sit around and bitch all day about how his people are getting slaughtered. Here’s an idea Bibble, grab a gun and kick some battle droid ass. No, he’d rather sit around and groom his facial hair. Like Padm? would ever give a grandpa like him the time of day. 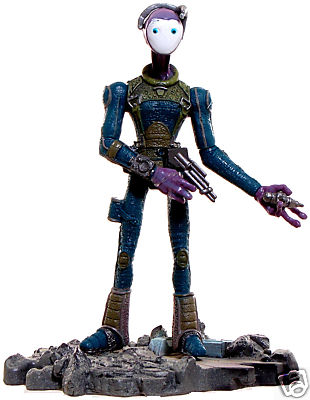 Looking like a third-rate anime character, Polis Massan is one of the aliens who live on the space rock where Padm? Amidala gave birth to Luke and Leia before totally copping out and dying of sadness or some bullshit. Polis Massan wasn’t in the room when this happened of course, as he was only given roughly three seconds of screen time in Revenge of the Sith. Not that that stopped the merchandising whores at Hasbro from releasing this figure upon an indifferent public. 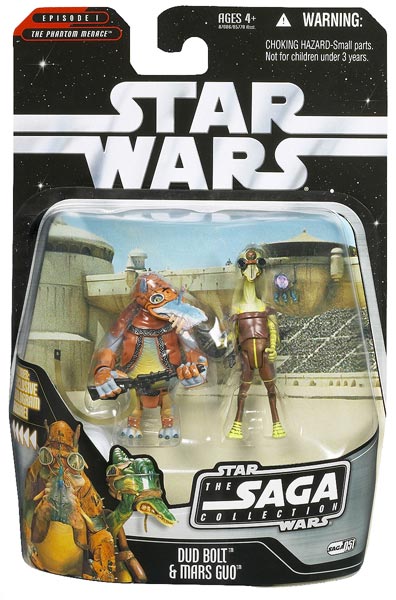 There’s a great YouTube video (which you can see here) that recreates the old Wacky Races cartoon with Star Wars characters.  From one look at this two-pack of embarrassment starring podracers Dud Bolt and Mars Quo, you can see that the joke isn’t that far from the truth. (It’s actually kind of surprising Lucas never made a “stop that pigeon” reference in Phantom Menace, guess he was too busy with the poop jokes). Without getting off on too much of a tangent about how awful the prequel’s CGI characters are compared to the foam and latex creatures that populated the original trilogy, let it be known that the Hammerhead action figure never caused kids who received it to cry. Dud and Mars? You’re looking at years of therapy if you try passing them off to tots. 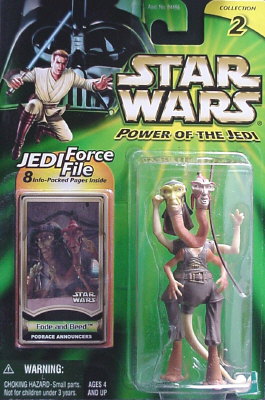 As awful as the various racers were, they had nothing on Fode and Beed, the annoying announcers from Episode I‘s  interminable podrace sequence. A version of this figure based on the pre-CGI look of the characters was originally released in a boxed set with a Jabba the Hutt that featured  (shudder) “spitting action and real-feel skin.” Eventually, Hasbro got around to putting out the Fode and Beed that actually appeared in the film. But unless you were a Greg Proops completist, you probably gave it a pass. 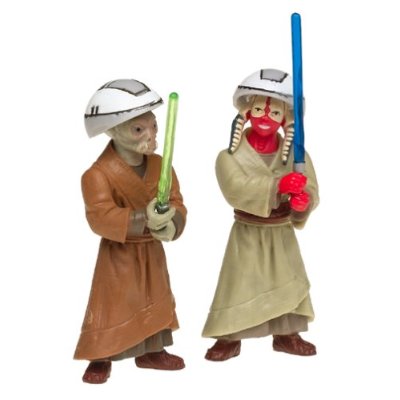 No disrespect to Jim Henson intended, but the world would be a happier place if we never had the Muppet Babies. As cute as they were in The Muppets Take Manhattan, they set the stage for The Flintstone Kids, Baby Looney Tunes, Watchmen Babies (hey, it could happen for real!) and these padawans. But before your hearts get too warmed by Ashla and Jempa here, you should realize that they were ruthlessly murdered by Anakin shortly after Order 66 went into effect. Unfortunately for us, no “Dark Side Rage Victim” version of this two-pack was ever offered. 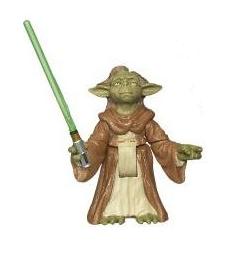 By the time the prequel trilogy was completed, pretty much all goodwill towards the Yoda character had evaporated. The mischievous and wise sage from the original trilogy had been replaced by a little green asshole whose backwards speak should have earned him a punt off of a transport ship by a syntax-respecting Clone Trooper. One minute he’s telling Anakin to accept his mother’s death and not to grieve her loss, the next he’s telling Chewie that he will miss him. It makes no sense. Equally baffling is why there was a female version of Yoda on the Jedi Council, she didn’t really do anything and therefore her figure is utterly useless. Unless you want to pretend that the figure is Yoda in drag. That could be fun. 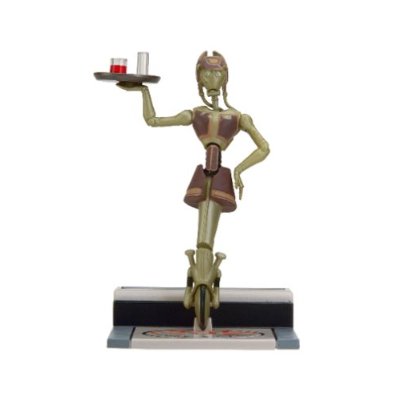 Sometimes it seems like Lucas is just fucking with people on purpose. Why else would Attack of the Clones feature a 1950s-style diner? I suppose we should be grateful that this WA-7 droid was asking customers if they want Jawa Juice instead of telling them to kiss her grits, but still. What are children supposed to do with her? Is it even a her? It sounds feminine enough? Can robots even have true gender identity? See, If you get this figure for your kid you’re just opening up a Pandora’s Box of questions that no one is mentally equipped to handle. 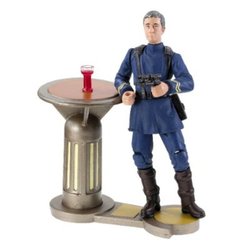 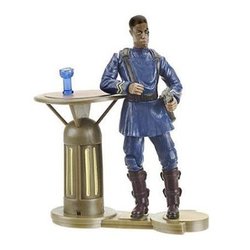 You thought Luke’s plan to rescue Han was fucked? Let’s recap the plot to assassinate Senator Amidala from Attack of the Clones:
? A — Jango Fett is hired by Count Dooku and Nute Gunray to kill Padm?.
? B — Fett hires bounty hunter Zam Wesell to do the job instead.
? C — Wesell has an assassin droid to complete the task.
? D — The droid uses space worms to try and kill Amidala.
That’s some pretty intense intergalactic buck-passing, but what does all it all have to do with Lt. Danni Faytonni and Achk Med-Beq here? Well, they were in the Coruscant nightclub when Obi Wan and Anakin caught Zam Wesell…and that’s pretty much it. George Lucas was apparently too consumed with having Anthony Daniels (C-3PO) and Ahmed Best (Jar Jar Binks) in cameos during the nightclub scene that he neglected to have any of the events leading up to their appearance make the slightest bit of fucking sense whatsoever. There’s an expanded universe story about how Lt. Danni Faytonni and Achk Med-Beq were at the club in order to con women. I’d love
to tell you more about it, but it involves an alien whose name is Oakie Dokes and that makes me cry uncontrollably for the senselessness of the world. 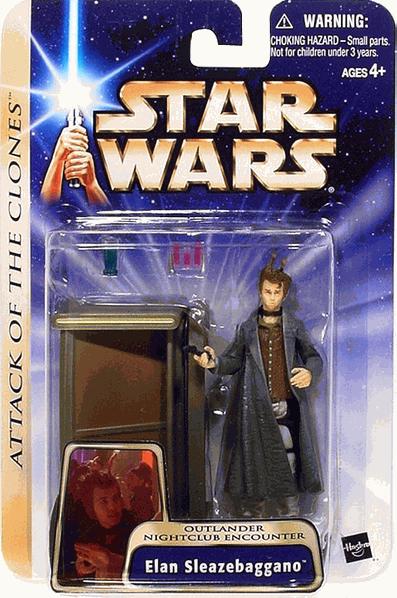 Remember how cool it was when C-3PO caught R2-D2 smoking in that old PSA? That was the only anti-smoking message we ever needed from the Star Wars universe. Not for George “Less Is Never More” Lucas. He had to stop Episode II’s already muddy narrative dead by having intergalactic druggie Elan Sleezebaggano attempt to sell Obi Wan some “death sticks” in the Coruscant sports bar/nightclub scene. Elan Sleezebaggano, that’s his name. See, because he smokes and he wants others to smoke, he is a sleazebag! Get it? When the inevitable special edition of Attack of the Clones is released, here’s hoping Lucas hires people to walk through theaters and hit moviegoers over the head with rubber mallets during Elan’s scene while screaming “SMOKING IS BAD, ALSO DON’T EVER LOVE ANYBODY BECAUSE THAT IS WRONG AND MISSING ANYONE OTHER THAN CHEWBACCA IS ALSO A NO NO, LIKEWISE, YOU SHOULDN’T GET ANGRY WHEN WEIRD DESERT MONSTERS RAPE AND/OR KILL YOUR MOTHER.” Actually, this would never happen. It’s way too subtle for Lucas. As for this figure, there’s no way that cigarettes are any less harmful than letting kids play with it. 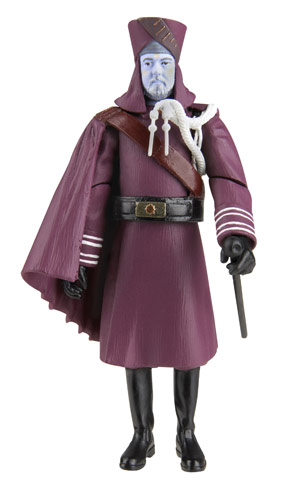 For a brief second in Revenge of the Sith, George Lucas can be seen cameoing as blue-skinned opera patron Baron Papanoida. The name is a painful wordplay on how Lucas considers himself a father figure to nerds thanks to his creation of the Star Wars saga. The toy was released in a special “Lucas Collector’s Set” that also featured figures inspired by the characters his kids Katie, Amanda and Jett played in the prequels. I’m singling the Lucas figure out since he’s the one responsible for this whole mess. He’s the one who had to come out of semi-retirement and make the prequels which resulted in the toys featured on this list. Baron is a final F.U. to the collectors who ravenously scoop up every figure to hit the shelves. It’s surprising that the face on the Baron’s toy looks so solemn. Shouldn’t he be having a great big laugh at the expense of all of us?