The Fantastic Four are more than a superhero team — they’re family. Since 1961, Mister Fantastic, his wife the Invisible Woman, her hothead brother the Human Torch and good family friend The Thing have regaled us all with their wacky adventures and constant bickering. Take your closest relatives, add superpowers and a scheming Latverian supervillain, and that in a snapshot is the Fantastic Four.

However, there have been times throughout the years when one or more of the Four have gone sick, missing and even died for a while. It’s never good to see the break-up of a family, but the remaining members of the team have always persevered and attempted to complete their magic number with other worthwhile candidates. It’s not always an easy fit, since the Fantastic Four’s powers are perfectly matched, based on the four basic elements themselves — fire, earth, air and, er… Silly Putty. Some of these replacement members have been great under the circumstances, and some… not so great.

There must be something in the contract you sign to wear the Ant-Man suit that specifies you have emotional problems and loserly tendencies. The first Ant-Man, Hank Pym, was a wife beater, and the third Ant-Man, Eric O’Grady, was just a jerk. The second, Scott Lang, was a burglar who tried to rob Pym but was rewarded with an Ant-Man suit with which to fight crime (as so often happens). But Lang was also an electronics whiz and was later hired by the Fantastic four to fill Mr. Fantastic’s role for the short time Reed was missing in the past and presumed dead. During this stint, Lang faced constant criticism of his abilities from Doctor Doom’s heir, Kristoff Vernard, along with the added insult of Lang’s daughter Cassie flirting with Vernard. Eventually, Reed returned, and Ant-Man II was soon after blown to kingdom come with Avengers Mansion by the zombie of Jack of Hearts, his nemesis. Despite being shat on by the universe, Lang at least tried hard.

When Mr. Fantastic and the Invisible Woman decided to take a break from all the stress of Marvel’s Civil War and go on a second honeymoon, it was only appropriate that Wakanda’s own power couple stepped in to replace them. Both awesome and powerful heroes, Black Panther was especially fitting since he had made his debut in the pages of Fantastic Four. After an impressive run in which they managed to battle both Galactus and the Frightful Four, Storm and Black Panther decided to return to their duties ruling Wakanda. 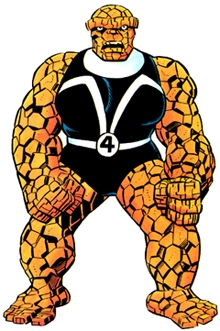 Sharon Ventura was first introduced as a motorcycle stuntwoman and wrestler who had a fondness for Ben Grimm, but not enough to let herself be crushed under his giant, rocky torso. She obtained artificial strength-enhancing treatments and joined the FF, only to quickly find herself in a shuttle getting bombarded by cosmic rays. Isn’t that always the way? The Thing further mutated, and Sharon turned into a She-Thing that looked like Ben Grimm did after his first encounter with the rays…but with breasts. With both of them now freaks, they were able to consummate their feelings to the horror and disgust of all. Although the relationship went sour and Sharon briefly turned evil, it was an interesting turn of events to have Ben find someone so much like himself. And then have sex with that person. 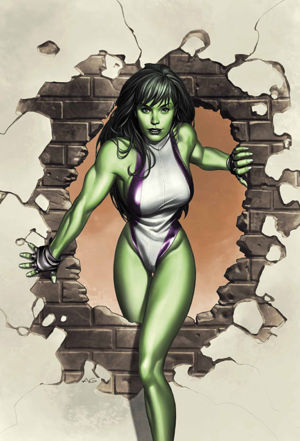 When the Thing decided to stay on Battleworld following the Secret Wars
(since he could transform back to his human form if desired), he asked
She-Hulk to take his place as the muscle on the Fantastic Four. No one
was better suited. Possessing beauty, brawn and brains, She-Hulk was
the closest the Fantastic Four ever came to a replacement member who
could have actually worked out permanently. And she stuck around for
quite awhile, too. It’s okay that she moved on, though, since she went
on to star in many excellent, humorous solo comics. 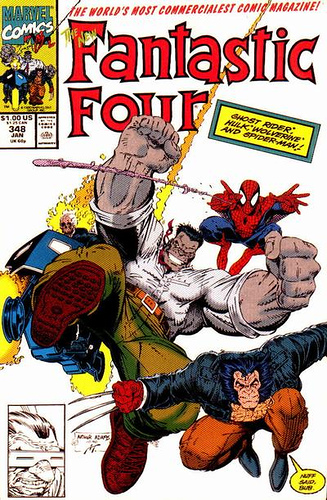 Yes, it was a blatant sales stunt, but it was a damned awesome one. For a story arc in the 1990s, the Fantastic Four were “killed off” in a way that Marvel didn’t pretend for even a full issue was real — a Skrull incapacitated the Fantastic Four and then, in the form of Sue Storm, summoned Spider-Man, the Hulk (in his more intelligent gray form), Ghost Rider and Wolverine and convinced them that Skrulls had broken into Four Freedoms Plaza and killed the others. The four heroes decided to become the New Fantastic Four and seek vengeance. It was all a preposterously convoluted Skrull ploy to do… something or other, of course, but that didn’t get in the way of the hilarious combination of the dysfunctional new team. Hulk and Wolverine bickered; Spider-man tried futilely to get people to listen to him; and Ghost Rider went batshit crazy and destroyed stuff as usual. Having four of Marvel’s most popular characters at the time on the same team rocked and was extremely entertaining. Let the fanboy in yourself admit it — for just a short time, part of you was hoping the Fantastic Four really were dead and that this new team was here to stay.

The worst is yet to come — hit the jump to see thos lacking inFantastic-ness.

The Fantastic Four have a long, incestuous history with the Inhumans, and two of the moon-dwelling heroes have even become official members of the Four. Crystal jumped in the fray when Susan Richards was pregnant with Franklin, and brought along her awesome powers of controlling the four basic elements. She certainly utilized her control of fire in order to make the Human Torch drop his pants, and their relationship caused quite a few rides on the drama-llama. Unfortunately, Earth’s air pollution got the better of the seemingly fragile Crystal and she returned to the moon. Medusa was originally a nemesis of the Fantastic Four, but they won over her loyalty and she joined the team when Sue Storm needed to focus on caring for her comatose son. Unfortunately, Medusa’s power is that her hair acts like tentacles. That’s just lame. 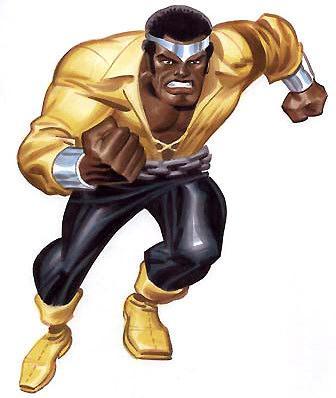 Let’s forget for a second that Luke Cage has become one of the most awesome ass-kickers in the Marvel Universe. Back in the 1970s, he wore fruity tights and a tiara, called himself Power Man and hired himself out as hired muscle to the highest bidder. It was while trying (and failing) to get Doctor Doom to pay up that he befriended the Fantastic Four. And when the Thing lost his powers, Power Man was brought on as the muscle the team now needed. Perfect! Except for the fact that Puppet Master quickly took control of him and used said muscle to beat the bejeezus out of Cage’s new teammates. It was a brief and unfabulous tenure, but at least Cage ditched the tiara and redeemed himself as a character several years later. 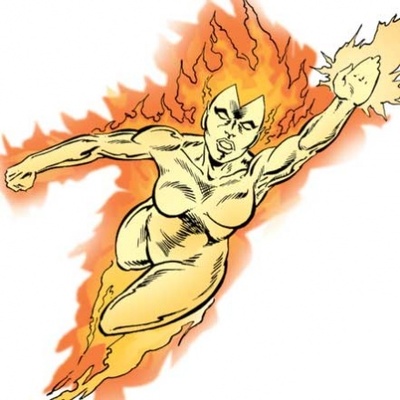 On the surface, Frankie Raye was a perfect alternate Fantastic Four member. She had powers very similar to Johnny Storm due to an accident with chemicals (always a reliable creator of superheroes) belonging to her stepfather, the creator of the original Human Torch. The only problem was that she was on the team at the same time as Johnny Storm, making herself redundant. She was also in a relationship with Johnny, which guaranteed the addition for even more drama to the team. Frankie then decided to ally herself with Galactus, one of the Fantastic Four’s greatest enemies, change her name to Nova and guide her master to find new planets and people to eat. That’s not an alumnus of which of which the Four can be proud. 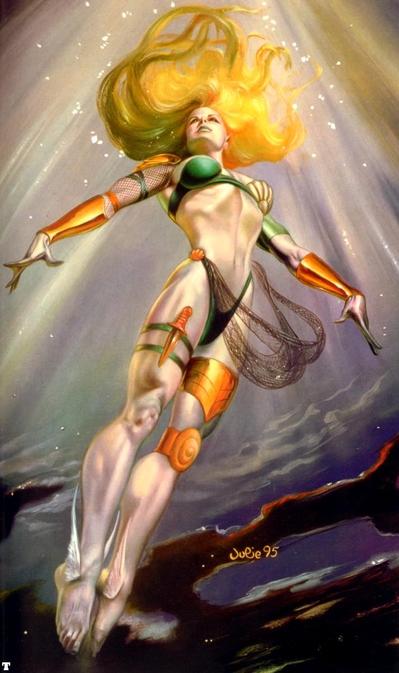 First of all, Namor’s cousin was a member of the FF for all of five minutes, joining the Human Torch, She-Hulk and Ant-Man II while the rest of regular Four were trapped briefly in the Negative Zone. Then she went on to goad a villain into blowing up her, her New Warriors teammates and a school full of children, leading to the U.S. government’s enforcement of the Superhuman Registration Act. FAIL. 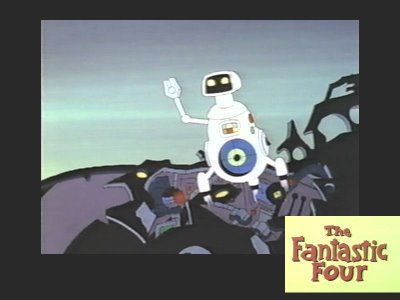 It’s certainly hard to hate H.E.R.B.I.E. He’s a cute, friendly little robot created by Reed Richards as a faithful, helpful companion who only yearns to help children across the world play Gyromite. But H.E.R.B.I.E. earned the scorn of a generation of comic book fans for being the chosen replacement for the Human Torch in the 1978 Fantatic Four cartoon series. Never has a replacement FF member been so unwelcome! The Human Torch’s absence from the show couldn’t be helped — the rights to the character had been sold for a movie that never got made. But seriously, couldn’t they have at least picked someone remotely similar to Johnny Storm? A humanoid, at least?! Wasn’t Toro available? Thankfully, H.E.R.B.I.E.’s appearances in the comic series have kept him in his rightful place as a Fantastic Four sidekick, not full-fledged member.