By Teague Bohlen and Rob Bricken

Happy almost Valentine’s Day, folks! You know, while sometimes it seems love is dead in the real world, it’s comforting to know that romance is alive and well in the pages of even superhero comics. Why, there’s Mr. Fantastic and the Invisible Woman, Black Panther and Storm, Apollo and Midnighter, etc. Hell, even Preacher‘s Jesse and Tulip ended up riding off into the sunset together, although admittedly it was after a lot of horrible shit, naturally, but still. But alas, romantic dysfunction is also alive and well in comics–just like in real life, I guess. But the extent to which some comic book relationships are seriously messed up? Truly super. Here are nine superheroic couples whose relationship problems are equally powerful. 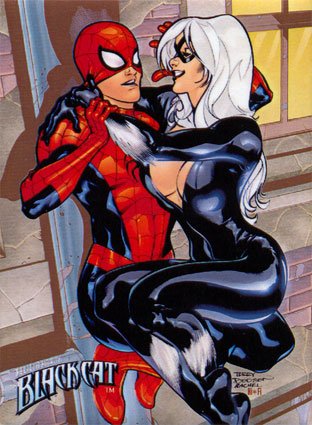 Peter Parker might be a perennial loser, but he’s enjoyed his share of fabulous babes. Gwen Stacy, Mary Jane Watson, and Felicia Hardy, to name only three (and a blonde, a redhead, and a brunette, no less — the trifecta!). Each of those three relationships had their own special brand of weirdness, but Felicia was a special case–this was a chick who was hooked on adrenaline rushes and who fell “in love” with Spider-man…and specifically not Peter Parker. How can a guy stand being in both the boyfriend and “just friends” zones at the same time? I’m guessing the mid-air sex was a pretty good part of it. (I acknowledge the opportunity for a “swinging” joke here, but I staunchly refuse to lower myself to that level.)

8) Cyclops and the White Queen 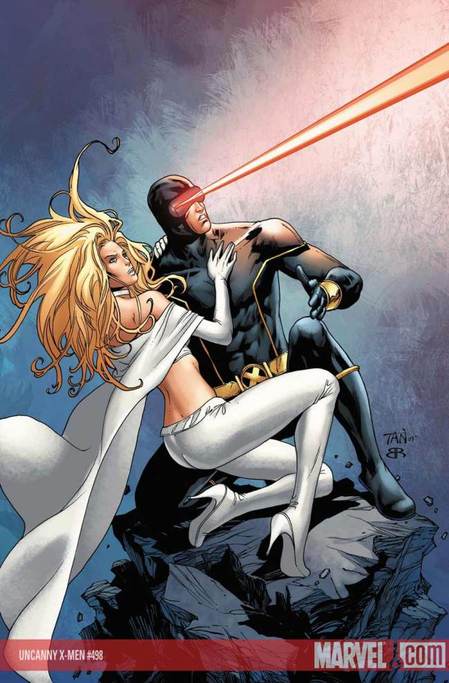 Okay, first, no one’s ever going to have a good relationship with someone who purposefully calls herself “the White Queen”. She’s putting it right out there that she’s a frosty bitch, after all. And Emma is definitely that–that, and the type of girl that you have fun with, not the type you bring home to Graymalkin Lane. That aside, Emma’s both vicious and a telepath, while Scott carries around a torch the size of Galactus for his sometimes dead wife Jean–which means that in this relationship, Emma never has to ask Scott what he’s thinking. She knows, and so their relationship more or less consists of her constantly slapping him mentally and occasionally making herself looks like Jean to torment Scott. Which is pretty kinky, really, but not in the good way. 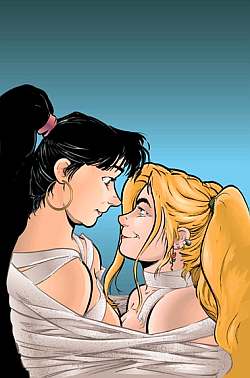 Terry Moore’s indy series Strangers in Paradise gave us several great characters, but none so fascinatingly screwed-up as Katina Choovanski. See, Katchoo is in love with her best friend Francine, who’s sometimes in love with her, too. But their friend David is in love with Katchoo, who is sometimes in love with David, too. This other friend Casey is in love with David, and Freddy is in love with her, and Francine used to be in love with Freddy but ended it because he was a dick. Oh, and Katchoo and David both used to work for (and sleep with) David’s older sister Darcy, who was merciless and violent. There’s more romantic convolution–a lot more–but you need to read the series (and maintain a couple of Excel spreadsheets) to keep track. This is why Strangers in Paradise was so popular with audiences–because it sounds exactly like high school. Well, with more incest, international prostitution rings, and twin assassins named Tambi and Bambi. Hopefully, anyway. 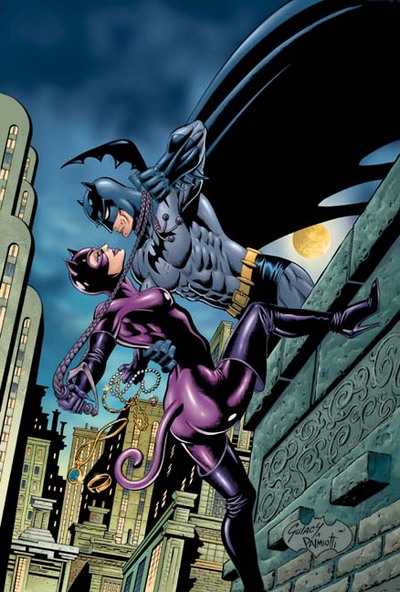 Bruce Wayne and Selina Kyle are the epitome of star-crossed lovers; clearly made for each other, but doomed at the same time. This has been a will-they-won’t-they relationship since Batman #1 in 1940, when Catwoman just called herself The Cat–but the flirting was already there. Hell, on Earth-2, they married and had a daughter, so that ended well, at least until Crisis came along and wiped the whole thing out. These days, it’s suggested that Bruce and Selina have sort of a casual thing going–but with them seeming to constantly be on different sides of the law, it’s a stormy thing, ultimately physical, and fated for an unhappy end. Gotham’s own version of Dr. Phil would definitely not approve.

5) Ultimate Quicksilver and the Scarlet Witch 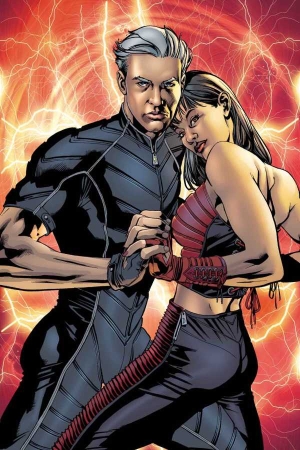 And we thought Pietro was sort of an asshole to his Inhuman wife Crystal. (I know a lot of guys who say their wife is inhuman, but Crystal is the real thing.) But we hadn’t seen anything until we saw Pietro getting a little too close to Wanda in Volume 3 of Ultimates. Or at least saw that there was a little brother-sister action going on–the Wasp says as much (and apparently doesn’t judge, which is both big of her and sincerely fucked up). And then just when you don’t think it can get worse, Ultimates 3 #3 suggests that Pietro is attracted to Wanda because…she reminds him of his mother. Paging Dr. Freud, Dr. Freud to the Avengers (Oedipal) complex, please, stat. 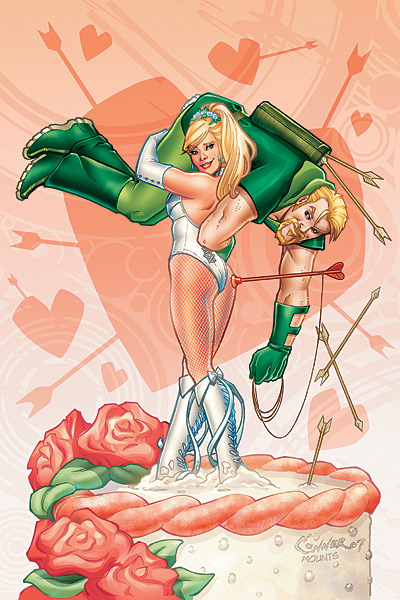 Ollie Queen and Dinah Lance have had their share of relationship issues leading up to their recent marriage. Nothing too big, really–just the usual stuff: starting out hating each other’s guts, but then falling for each other despite a considerable age difference, the usual bickering that couples tend to do, Dinah getting kidnapped and tortured, Ollie cheating on Dinah, Dinah losing her powers, Ollie cheating on Dinah again, Ollie stealing from Dinah, the two separating for a while, Ollie dying in an explosion and then coming back from the dead, Dinah realizing that this reincarnated Ollie was a better guy than the old guy she used to love and hate (and he was a lot younger this time around, too, which was nice). So they got married. And then Ollie tried to kill Dinah on her wedding night, because he was actually a shape-changing assassin. But that was okay, because once the real Ollie was rescued from Amazon Island, they got married for real–because everything up to that point had gone so freaking well.

3) The Vision and the Scarlet Witch

The Scarlet Witch’s love life is even more troubled in the regular Marvel universe. She falls in love with the Vision, an android made by long-time Avengers foe Ultron. Perhaps as a result of her probability-altering mutant powers, the Vision learns to love, and falls for her — they marry and have kids, which doesn’t freak either of them out although he’s a freakin’ robot. unfortunately, it turns out the kids are figments of her imagination she’s willed into existence because she’s batshit crazy (see above, re: marrying a robot) which is fine until someone realizes this and points it out, causes the fake children to stop existing. The Vision barely has time to console his crazy spouse when the government disassembles him for kicks; although he later gets rebuilt, he’s missing his crucial “love-your-wife” program, takes off, and breaks Wanda’s heart again. Then there’s a whole self-desructive relationship with Wonder Man, which eventually ends with the Vision and the Scarlet Witch together again. This works out awesome until Wanda is reminded of her kids, goes insane, and makes the Vision’s head explode with about a million Ultrons. 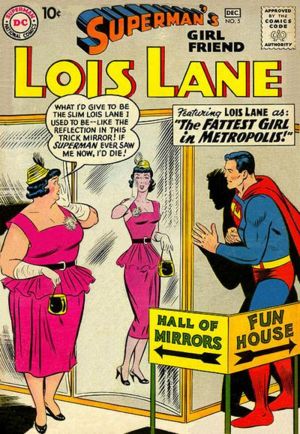 Good god, where does one begin? I
know, I know–one of the most famous relationships in comic books is worse than
brother-sister twincest? Yes. As evidence, I give you the entire freaking run
of Superman’s Girlfriend Lois Lane,
in which Lois alternately abuses and is abused by Superman. What was sort of
weird behavior in the core Superman books of the 40s through mid-60s–namely,
Lois’ obsession with either revealing Superman’s identity or trapping him into
marriage–blossoms completely and insanely in this series. Lois embraces
witchcraft to match Superman’s powers, commits breaking and entering, goes to
prison, gets hugely fat (and then skinny again, natch), is reverted to an
infant (but gets better), and toys with the emotions of both a mentally
challenged wrestler and none other than Pat Boone himself in order to make
Supes jealous. And that’s just in the
first ten issues. Oh, that was only the tip of Lois’ Iceberg of Crazy.
Which, knowing Lois, she’s strategically placed somewhere near Superman’s
Fortress of Solitude. Supes, two words: restraining order. 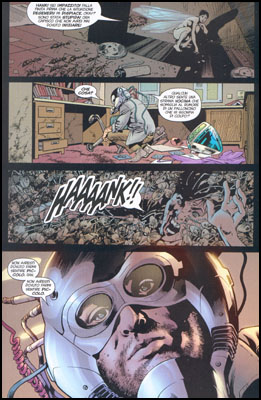 If non-Marvel comics fans have ever heard of the Wasp, they probably don’t know she was a founding member of the Avengers. They probably don’t know her real name is Janet Van Dyne, and that she enjoyed design fashion when not being heroic. What they know is that she  got hit in the face by her husband, Hank Pym. Now both Batman and Catwoman have beat the heck out of each other plenty of times, as well as Ollie and Dinah. However, what makes Janet’s beating so horribly memorable is that 1) Hank and Janet were actually married at the time, and 2) Hank hit her not to stop a crime or release her from some evil mind-control, but because she was nagging him. Not cool, Hank.

Of course, the regular Marvel universe Hank Pym will be nominated for sainthood before anyone asks Ultimate Hank Pym (a.k.a. Giant Man) for marital counseling. In The Ultimates, we find out that in college, Hank slammed Janet’s head through a door among other beatings. Naturally, the Wasp married him. Flash-forward a few years until after Captain America is revived, and another domestic dispute between the Pyms turns physical. The Wasp shrinks to get away (after admittedly getting in a few more wasp-stings at Hank), but Hank covers her in insecticide spray, chases her under a cabinet, then uses his new helmet to command about a thousand ants to attack her — which is more terrifying when you realize she’s only an inch high. Of course, that doesn’t stop the Wasp from looking longingly at him a few years later, after dating noted fuddyduddy Captain America. Congratulations, you crazy kids! True love never dies, even when attacked by ants!
Tweet Pin It