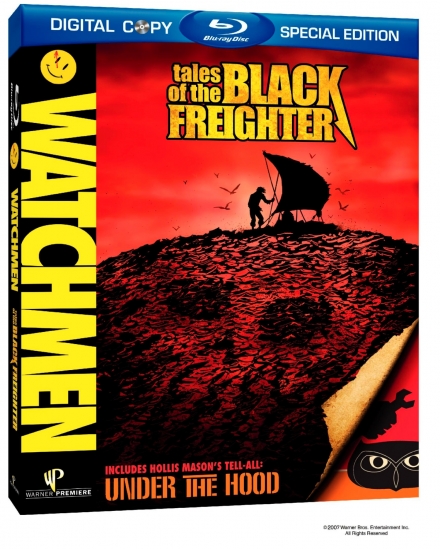 Now that the Super Bowl trailers are out of the way, we can get back to business — specifically, talking about the Watchmen movie 24/7. Today’s news is a little more worthwhile than usual, in that Warner Bros. has announced the Tales of the Black Freighter DVD, the animated version of the awesomely cheery tale about a guy who makes a raft out of corpses and…well, let’s just say it goes downhill from there. The DVD also features “Under the Hood,” which appears to be a live-action documentary-style piece on the Minutemen, based on Nite Owl I’s book, natch. Apparently there are a couple other extras, including a sneak peak of the animated Green Lantern direct-to-DVD flick, and the Blu-ray has a deleted scene called “The Two Bernies.” I don’t have my copy of Watchmen nearby; anyone have any ideas? (Via Digital Bits)