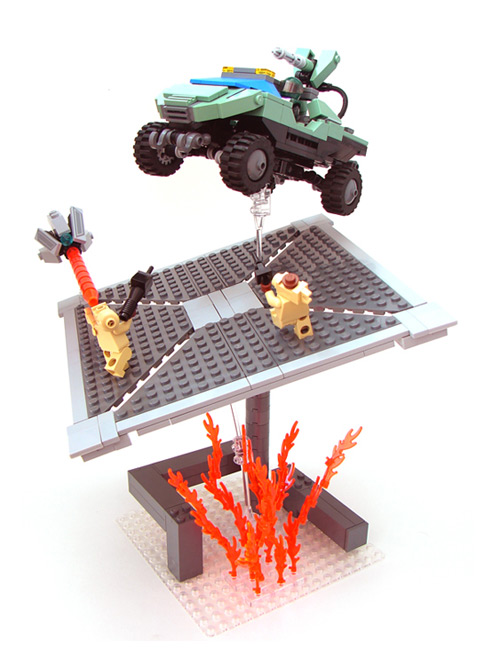 Yes, Mega Blocks. The people who make the blocks that are like Legos and work with Legos but are not Legos have been granted the Halo videogame license.

Shares of Mega Brands Inc
(MB.TO) more than doubled on Tuesday after the toymaker said it
had signed a global licensing agreement with Microsoft Game
Studios (MSFT.O) to make construction toys for its Halo Wars
video game. The Montreal-based company’s shares soared 123.1 percent to
87 Canadian cents by late morning on the Toronto Stock
Exchange.

The deal will see Mega Brands develop construction toy sets
based on the characters and vehicles of Halo Wars, an action
strategy video game set in the future. Financial terms of the deal were not announced. The video game is set to hit stores shortly, with the Mega
Brands products available beginning in June.

I know a lot of people are pretty excited about this, since if you do a Google Image Search for Halo Lego, there are several billion fan-made creations like the one above (courtesy of Level Select, who has plenty more where that came from). I’m not much of a Halo fan myself — I could only get into shooting my co-workers in the face with a shotgun during our Wizard after-work marathons, never the single player campaign — but I have to admit running a little build-a-Warthog off my stairs would be pretty sweet. (Via Reuters)