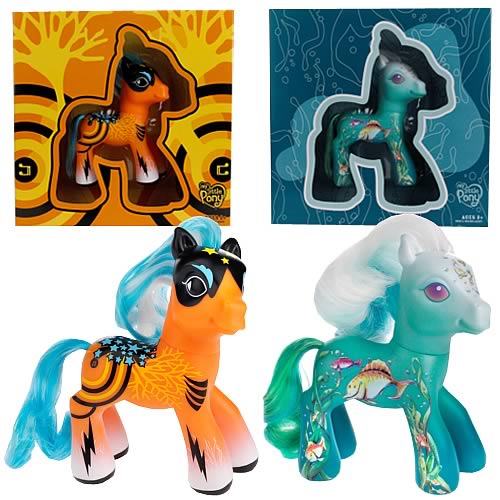 I think I vaguely recall hearing about this before, but I believe this is the first I’ve seen of the My Little Pony Collector Art Pony collection, which (obviously) takes the standard Pony body and lets some unnamed artists tart it up. I’m not actually going to mock it, because I think it’s a pretty swell idea — I mean, I don’t want ’em, because I’m a boy, and have a penis and everything, but I approve of the concept. After all, we guys have been getting all sorts of new crap from our ’80s-toy-laden childhoods; I’m glad the ladies are getting some of the same love. Of course, I have no idea if these are what you gals want (remember: penis) so tell me, female Roboteers, are you buying these things? Or are even glad they exist? Or hate them for some reason I’m hoping you’ll share with us in the comments?

Actually, I’d like to see Hasbro go ahead and take the next step, and let some real artists get their hands on the Ponies, and just go crazy. They did it for that charity auction last September, and frankly some of those were genuinely badass. I could see my MotU toys riding some of those things.You know. If I weren’t a boy. (Penis!)