The 1980s were a golden age for toy lovers. From Star Wars to He-Man, Atari to Nintendo, there were an endless array of awesome toys kids growing up in the Reagan era could kill their time with. If you doubt how much of an impact the playthings of the me decade had upon popular culture, just tune into VH1’s I Love the ’80s specials or visit any Target or Wal-Mart action figure aisle and see how most of the lines featured there started over 25 years ago. Many of these products were amazing fun for children at the time. But for their parents? Not so much. Whether due to issues of cost, durability or good old fashioned supply and demand woes, many 1980s toys gave adults nothing but a headache. Let’s check out 10 toys that made you happy, but made ?your mom and dad’s lives a living hell.?

Looking to profit off of the interest in Masters of the Universe-style fantasy toys, Ideal released their Manglors line in 1984. Made of “the strangest stuff on Earth” (actually just sticky adhesive rubber), these monster figures could be stretched, ripped apart and reassembled so that kids could mix and match various characters and make up their own creations. At least that’s what Ideal claimed. In reality, once a kid ripped off one of the Manglors’ limbs and tried to reattach it, the toy was rendered worthless — leaving parents with a lighter wallet and a crying child. Ideal also released a Manglor Mountain playset, which included a vat of slime to further enhance mom and pop’s misery. Although they are admittedly cool-looking, Manglors are primarily a cautionary tale about the dangers of poor toy design. 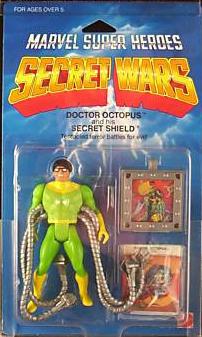 Based on the comic mini-series of the same name, Mattel’s Secret Wars action figures featured heroes and villains from the Marvel Universe packaged with a cool-but-useless “secret shield” accessory. During the line’s brief production period, 16 figures were released — with three of those only ever being available overseas. Young comic fans were unhappy with not being able to get all of the toys; they also weren’t too pleased that more obscure characters were getting made before the A-list heroes (nerd bitching aside, the line did feature the first-ever toy representations of Wolverine and Spidey in his black costume). The true problem with the toys is that they were cheaply made. Here’s the scene: it’s summer of 1985 and you just got done devouring some Fun Dip. Your hands coated with sugar and saliva, you decide to have an adventure with Captain America. Before you know it, the high-fructose mess on your mitts has completely eaten away the paint on Cap’s midsection. Similar tragedies played out in backyards, churches and living rooms throughout the country. The most notorious figure in the line was Doctor Octopus, whose tentacles and legs usually fell off a few minutes after he was removed from his blister card. Parents already tired of hearing their tots complain about how Spider-Man’s mask was missing it’s black lines really had no time for Doc Ock’s leper antics. Their solution? To say screw the Secret Wars toys and buy Super Powers figures instead.

Lovingly nicknamed “Chokey Chokehazard” by emergency room workers, the Wacky WallWalker was the perfect toy to mess up your mother’s perfectly clean windows and mirrors with marks from its wee little tentacles. Kids were supposed to lightly toss the WallWalker on the wall, and watch it crawl down. Of course, kids instead threw the tiny octopus at the spped of light, ensuring whatever filth and residue that the WallWalker had picked up would also be left on said wall. Was WallWalker creator Ken “Dr. Fad” Hakuta secretly hired by SC Johnson Wax to boost sales of Windex? We may never know.

Fuck Worlds of Wonder. They are quick to mention in their fancy schmancy Lazer Tag commercial (seen above) that the game kit doesn’t come with a fucking stadium, but at no point do they mention that it only includes one gun and one sensor when two of each are required. Which means the game of so-called tag is absolutely worthless with one kit unless you wanted to plop the sensor on your pet/little sister and fire away. Like that’s fun for more than an hour. Parents are busy, what with jobs and buying food and paying bills to ensure that their children have a roof over their head under which they can enjoy Star Wars-lite infrared battles. They don’t have the time to read the fine print on toy boxes, and they sure as shit can’t count on their idiot kids to pass bits of Lazer Tag trivia along to them. Many an inattentive mom or dad bought a set for their tyke and returned home to have the ingrate throw a fit before dejectedly hopping back into their cars to buy another one, all the while daydreaming about the types of carnage they don’t demonstrate at the Lazer Tag Academy.

Also released by the joy-haters at Worlds of Wonder, Teddy Ruxpin was a stuffed bear who was given the power of speech by Satan. He utilized the same kind of technology that caused all of the robots at Delos’ Westworld resort to go on a killing spree. Actually, Teddy was initially created to help parents slack off by doing the tedious work of telling kids stories for them. But thanks to the fact that the doll was overpriced and constantly required the purchasing of new story tapes, parents wound up reading to their children again anyways. No doubt horrifying them with tales of blood-drenched bear hunts.

Hot on the heels of the demand for all things Australian that also gave us Crocodile Dundee, Men at Work and Olivia Newton John’s Koala Blue clothing stores, Nerf released this toy that promised users a g’day full of fun. As parents discovered, the downside of this is that a good chunk of kids preferred to use it to throw around indoors, kocking over lamps, pictures and other decorative items, or just whack their siblings with instead of living out their Aboriginal fantasies.

Measuring at 7 ?-feet long, the USS Flagg Aircraft Carrier is the largest action figure playset ever released. The Holy Grail for many G.I. Joe collecto
rs, the Flagg rivals only Hasbro’s recent Millennium Falcon toy in terms of play value and wow factor. Viewed through the eyes of a toy geek living in 2009, its original retail price of $89.99 seems like a bargain. This wasn’t the case for parents back in 1985 who found it hard to pony up for a toy that was crammed with small parts that could be easily broken, lost or swallowed. There’s also the issue of where the hell to store the massive thing when it wasn’t being used, a practical concern no kid who wants to fight freedom wherever there’s trouble takes into account. After that concern was ironed out, the Herculean task of assembling the ship and properly applying the decals had to be undertaken — causing dads and moms alike to question how their lives got so off-track.

Hey kids, ever wonder what it would be like to send Chewie on an adventure through your bowels? Find out with Kenner’s swallow-riffic new Star Wars Micro Collection line!

After already shelling out hundreds of dollars buying the Atari system and various games, parents had to deal with the electronic nightmare that was the Colecovision. Once kids found out it had better graphics and could play all of the games they already owned (for an additional cost of course), their begging was relentless. Having to constantly upgrade gaming systems may be old hat now, but there was no precedent back in the 1980s at the start of the video game revolution. And not nearly enough Maalox/booze for your mom and pop either.

Riots, tears and near bloodshed. That was the real cost of the Cabbage Patch Kids. As horrendously popular as they were hideously ugly, Cabbage Patch Kids were harder to get than cocaine in most parts of the USA. When stores were reported to have shipments, parents flooded the shops, fighting and scratching just to buy an ugly doll with some dude’s name on its ass for their ungrateful child. This is the sort of shit parents endure because they love their children and want them to be happy. Try to remember that the next time your mom or dad asks you how to program their DVR for the 20th time.