Menu
Home
>
Cartoons
>
The 10 Most Ridiculous Things About the Original G.I. Joe Movie (Besides Cobra-La)

In just a few weeks, the majority of us will be exiting theaters on the opening night of the live-action G.I. Joe: Rise of the Cobra, either laughing till we puke or pummeling each other out of sheer, unadulterated rage. Between Schumacher-esque Joe body armor, Storm Shadow’s sneakers and Duke’s childhood buddy Cobra Commander, we all know we’re in for something painful–but whether it’s Troll 2 painful (hilariously bad!) or Love Guru painful (assisted suicide) remains to be seen.

Much like what transpired two years ago on the eve of Michael Bay’s Transformers being unleashed, fans are already saying there’s no way this new Joe flick can hope to compare with its 1987 animated predecessor. While the existence of Cobra-La–and, for that matter, the very idea of bringing a sci-fi element into the G.I. Joe mythos–was universally reviled, many of us still carry a torch for G.I. Joe: The Movie. Of course, it’s plagued with its own share of problems–and not just the “Duke was supposed to die” plot twist. Here are the 10 biggest moments of non-sensibility that should have had even idiot-plan-prone Cobra Commander calling foul.

10) Both the Joes and Cobra Troops Are Immune to Cold

When you’re hanging out in the Himalayas testing out — or trying to steal — large, awkward energy devices, apparently a nice wool-lined jacket and some gloves are all you need to keep from freezing to death. But Shipwreck’s sailor hat looks mighty warm, indeed! And good idea keeping your headband on, Quick Kick — we’d hate for your eyebrows to get icicles.

Hell, even the follicly challenged Roadblock and Dr. Mindbender don’t feel the need to don toboggans. It’s just a bit nippy out is all. We’re sure everyone was laughing at Snowjob behind his back, what with his snowsuit, fur-lined hood and protective goggles. Dork! 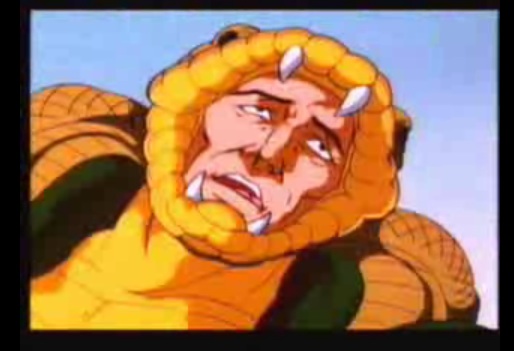 Wait, we mean the Broadcast Energy Transmitter, not B.E.T. the cable network. But we’re sure Serpentor would be overjoyed to catch some BlackBuster Movies on the weekend (we’re not making this up–they exist!).

When the film was released, it was rather shocking to see Serpentor mixing it up with Duke. Usually Cobra’s genetically engineered head honcho was gliding around on his air throne and barking out “THIS I COMMAND!” to no one in particular, rather than engaging in fisticuffs with Joe scum. But we all saw him slapping our man Conrad around somethin’ fierce… until Duke gave him the ol’ alley-oop onto the B.E.T.’s energy panels for a fried-snake special. Serpy then makes some agonized faces which look more like expressions of a man pleasuring himself with thoughts of Pythona. Don’t judge the man! This we command! 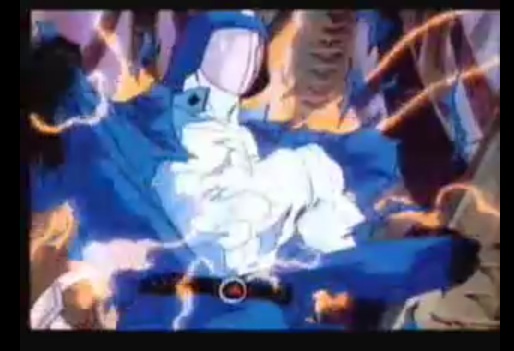 Buff but unimposing bad guys were pretty much the norm in the ’80s (see Skeletor, Mon*Star, etc.), but before 1987, it was unlikely any kid considered Cobra Commander much of a physical threat. He was smart enough to get others to do his dirty work for him, and it’s certainly not a stretch to call him a coward and ineffective leader. That was kinda what made him awesome. Besides, wasn’t Lifeline the only Joe he ever cold-cocked on the animated series? C’mon, that’s like slugging a blind kid in preschool.

Yet here we have C.C., exposed to “the spores,” freaking out and ripping his uniform open to expose an impressive set of scaly pecs. As Robert Downey Jr. as Kirk Lazarus as Lincoln Osiris would say, “You more shredded than a Julienne salad, man.” (Say, can that guy get a Joe figure anytime soon?)

For the film, ski mask-lovin’ ranger Beach Head was entrusted with the responsibility of selling new action figures … wait, scratch that, we mean training new recruits. And ho ho, what a motley crew this bunch is! Look, there’s the mute undercover agent in the Hawaiian shirt! He’ll blend right in when trying to make weapons deals with Destro! Don’t forget the joke-cracking Latino M.P.! Paul Rodriguez has nothin’ on this guy!

That might seem like reason enough for Beach Head to constantly be surly and on the verge of an aneurysm, but these guys succeed in every single challenge he dishes out. Sure, their methods are a little unorthodox, but Christ man, we’re talking about combating a ruthless terrorist organization that has on occasion used giant killer vegetables and hypnotic heavy metal to try and take over the world. And you already have guys with parrots, wolves and eagles on your own team. Give the newbies some leeway! They went above and beyond the challenges! Tunnel Rat and that basketball dude ripped it up on the training course, Law found the bomb, Chuckles THREW A MISSILE to destroy a H.I.S.S. tank, and Jinx kicked the everloving shit outta ya, blindfolded. Missions accomplished! Or as our blind ninja master used to say, “The keenest eye is that which chills the fuck out.” 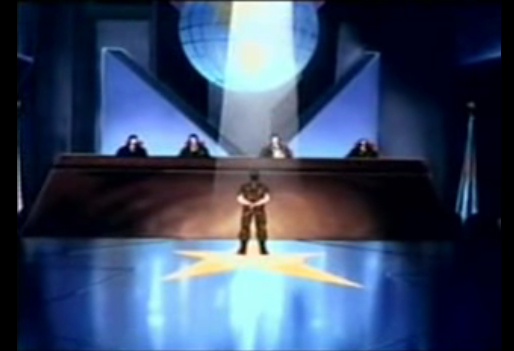 Well, most of the time, anyway. The Joe recruiters somehow failed to dig up that inexplicable film star Falcon was the half-brother of second-in-command Duke. Or that, you know, he was completely unfit to be a soldier, much less a primo candidate to join a highly trained special mission force. Which leads us to…

(Goofiness begins at the 1:10 mark.) Where do we start? Playing hooky on his first day of training with the rest of the recruits? Allowing strangers into a top-secret military base and permitting them to take photos, all while trying to get laid? Sexual harassment of a fellow soldier (the ass-slapping variety)? Being voiced by Don Johnson? Surely Larry Hama didn’t have this in mind when he wrote the Falcon action figure’s file card, characterizing him as a second-generation Green Beret — these are the guys who are usually described as mentally agile, astutely aware and physically tough, able to endure difficult training and face all challenges head on.

To make matters worse, this high-ranking officer is sent to the Slaughter House and bossed around by Sgt. Slaughter–who, as many of us found out from arguments with older brothers or uncles who served in ‘Nam, ranks below a lieutenant. And while we’re on the subject of the Sarge…

4) “The Terrordrome? Enh, We’ll Get to It Eventually.”

Seriously, all it takes to infiltrate th
is Cobra base and explode the shit out of it are the Sarge and four VERY rough-around-the-edges Joes. General Hawk gives them a simple recon mission to carry out — it amounts to, “Hey, swing by the Terrordrome and see what Serpentor’s up to. We kinda need to know his plan.” Here’s a better idea, Hawk–send an assload of Skystrikers or Conquest X-30s and bomb the hell outta the place. Then you wouldn’t have to worry about Serpentor’s plan. Would that be violating some treaty? Was the Terrordrome in international waters? Probably not, since it was on land.

And while we’re ranting, Mercer is able to use a key code to get into some kind of air duct (“Even big bad cobras need air conditioning…”). Uh, shouldn’t the powers that be at Cobra be changing these codes every few weeks? Since some of their troops go AWOL and defect to the Joes and all? Gaaaaaah. Even 8-year-olds called bullshit on this.

We’re gonna call it now: This is the greatest animated G.I. Joe sequence of all time. It has everything a Joe fan could want–Cobra having a legitimate terrorist plot (blowing up the Statue of Liberty) and actually appearing somewhat frightening (check out that Crimson Guardsman punching out the TV camera); minimal dialogue (all you ever need to hear are the token outbursts of “Yo Joe!” and “Cobra! Retreat! Retreeeeeeat!”); your favorite Joes being badasses (yeah Snake-Eyes, flip that Trouble Bubble!); a kickass theme song (there’s a reason our esteemed contributor Sean T. Collins called it one of the greatest geek songs of all time; and finally, lots of shit getting blown up.

Yep, the Joe producers took a page from the James Bond handbook and delivered a balls-out intro that was guaranteed to have kids hanging from the rafters and in complete aniticipation for what was to come in the following 80 minutes. Too bad most of those minutes were devoted to killer clams and cephalopods.

2) The Mere Existence of Big Lob

(The glory of Big Lob can be seen at 0:35.) If you’re wondering how Chuckles and Tunnel Rat made it into G.I. Joe: The Movie, consider the rest of that ’87 lineup of figures — would you have preferred to see Crazylegs (boring parachute guy) or Outback (loser with SURVIVAL T-shirt) in animated form? Still, one of the biggest head-scratchers is the inclusion of the mysterious Big Lob, a basketball-themed Joe who speaks in sports-commentary gibberish (“Aggressive defense!”) and never had a figure produced. Hell, it’s hard to even make out his name the lone time he utters it in the flick (“And Big Lob makes his move!”). And in basketball, isn’t a lob an assist pass? Should this guy be called “Big Assist”?

We can only imagine his presence was intended strictly for comic relief–and he wasn’t even all that funny, unless you found tall, lanky Joes hanging out with much shorter Joes to be a real gut-buster. At this point in the toyline, the Joe team hadn’t had many brushes with sports-themed recruits, aside from a dude named Grand Slam, Sgt. Slaughter (who, if memory serves, wasn’t a wrestler in Joe lore), a figure of the Fridge (the less said about that the better) and Bazooka, a guy wearing a football jersey. But Big Lob begat the baseball-themed Hardball, one of the worst “peg-warmer” figures of all time (seriously, you could still find him and Crystal Ball all of the way up until the “Real American Hero” line’s cancellation) and the egregious Captain Grid-Iron.

And so we come to the movie’s biggest offense–the most badass Joe of all time getting knocked stone-cold by a back-slap from a Royal Guardsman. God, this is painful.
Much like how in the 1986 Transformers flick many fan-favorite characters were killed off to make room for the new generation, G.I. Joe: The Movie practically started out with a battallion of popular Joes getting creamed by a new enemy. Shipwreck, Quick Kick, Roadblock, Lady Jaye and Snake-Eyes were all disposed of pretty effortlessly. Seeing Quick Kick getting grabbed by the ankle and slammed against a Cobra-La beanstalk was pretty shocking, but watching Snakes-Eyes frantically try and shoot a squid/bug dude at close range before being floored by a single blow was heartbreaking. Sure, Snake-Eyes was always a bigger badass in the comics and had been reduced to break-dancing early on in the Joe animated series’ run, but he was still the coolest troop around … how the hell could such a shameful ass-kicking happen? To make matters worse, once he gets decked, he does a ballerina-like pirouette before hitting the ground. Snowjob fared better against these guys! Inconceivable!

So to Ray Park, a word from the wise: This aggression will not stand, man. Be the badass … please.