From 1992 to 1999, Playmates Toys held the license to create
vehicles, action figures and playsets based on the various Star Trek franchises.
During that time, the company released a staggering amount of product that gave
Trekkies an opportunity to own plastic representations of classic Star Trek,
Star Trek: The Next Generation, Star Trek: Deep Space Nine and Star
Trek: Voyager characters. As production wore on, the sculpting got a bit
sloppy,  and DS9–largely
ignored at the time by the press and viewers alike–was given short shrift when
it came to the figure assortments. These issues aside, Playmates’ Trek toys
were more often than not a great way for children and grown-up geeks to bring
the final frontier into their homes anytime they wanted. Coinciding with J.J.
Abrams Star Trek reboot/reinvention/whatever, Playmates will once again
be making toys based on Kirk, Spock and company. This seems to be causing an
equal amount of excitement and dread amongst fans, many of whom ponder if the
damn things will be worth the cost of the petroleum it takes to make them. (Did
you see that new Kirk figure in what appears to be his Starfleet-issued sweater
vest? Yikes). As collectors prepare for the uncertain days that lie ahead, let’s
take a look back at the worst Trek figures Playmates released the first
time around. Some of these are poorly made, some are totally unnecessary and
some will make you realize the emptiness of existence. 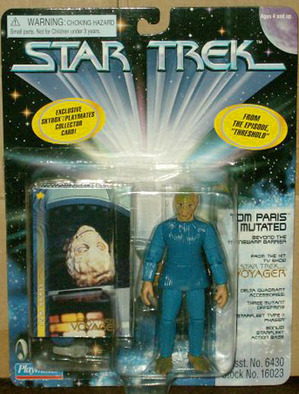 Remember how Star Trek: Voyager‘s “Threshold” was
recently voted by Topless Robot readers to be the stupidest sci-fi TV episode? Well,
that televised groin punch also gave us this figure of Tom Paris. It’s unlikely
that any Voyager fan was clamoring for a figure of a mutated version of
the show’s most milquetoast character dressed in nursing scrubs, but they got
it anyway. Devotees of the episode’s bullshit fish creatures will be filled
with joy to learn that this toy also came with three of the baffling writer’s
constructs as accessories. 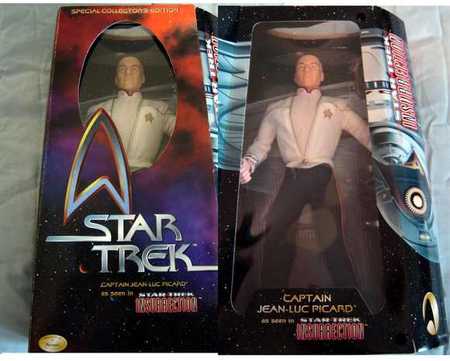 If you did a study of the exact moment when sci-fi fans began
to tire of Star Trek, you could probably trace it to the scene in Star
Trek: Insurrection when Picard and Worf began signing Gilbert and Sullivan.
It was just one of the movie’s many groan-inducing moments. (Which is saying a
lot given the zit jokes, “cute” CGI characters and piss-poor acting that infest
the flick like cinematic termites). Apparently influenced by the Saturday
Night Live sketch in which Captain Picard helmed The Love Boat, the
film featured redesigns of Starfleet’s dress uniforms that make the crew look
like they should be working on a Lido deck somewhere. Playmates deemed it
necessary to release a 12-inch figure of Picard in one of these outfits. Other
than turning smiles into frowns, it serves no discernable purpose. 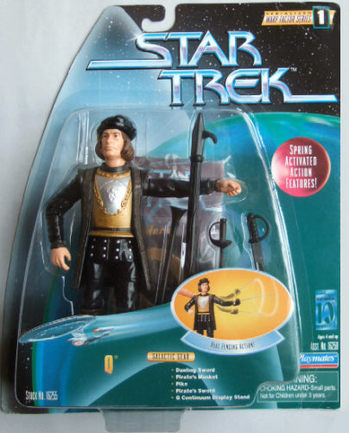 Sometimes Q was menacing. Other times he was a jackass. He
was on Voyager too, which made no sense and proved yet again that the
series found it impossible to forge its own creative path. People loved Q
regardless, so he was given several different action figures–including one in
the memorable judge’s robe outfit from the “Encounter in Farpoint” and “All
Good Things…” episodes.  In the
waning days of Playmates initial ownership of the Trek license, they released
the Warp Factor Series assortment. The worst of that bunch was this Q toy from
the “Qpid” episode that was way too fencing intensive. If Q’s so omnipotent,
how come he didn’t know that fencing equals the most boring action feature
possible? 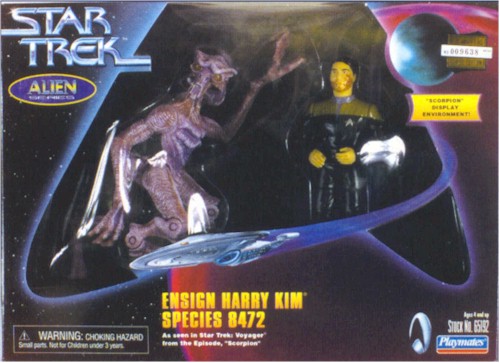 When not ripping off plots and supporting characters from Star
Trek: The Next Generation, Voyager loved patting itself on the back
for everything from the half-robot broad in the spandex to the thrills that
came from Tom and B’Ellana’s domestic problems. This self-aggrandizing reached
its apex in 1997 when the series presented Trek’s first-ever CGI villain,
Species 8472. Hopes were high that the creatures would become as beloved as the
Borg–who were quickly brought in as the alien race’s enemies in yet another
shameless grab for ratings when no one cared about the new foe. These days,
Species 8472 is a reminder of the glut of poor CGI that dominated late-1990s
sci-fi. Released in a two-pack with a Harry Kim that is apparently covered in
shit, the figure looks more realistic than the actual creature did. Not that
that justifies its existence or anything. 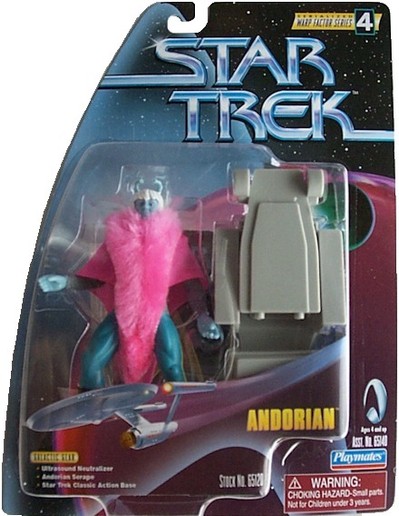 The host of the 23rd century version of What
Not to Wear, the Andorian can help you prep for your date with Captain Kirk
or give you advice on how to handle a pissy Vulcan who is experiencing Ponn
Farr. Unless he (she?) gets suffocated by some sort of pink fabric monster
first. Or could all that pink on the figure just be inflammation of some kind?
Better break out the space penicillin to be sure. 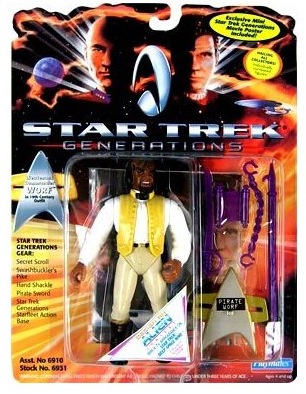 Based on Star Trek: Generations’ holodeck scene in
which Worf is promoted to Lieutenant Commander, this figure has everyone’s
favorite ornery Klingon dressed up in 19th century nautical
attire–which is really stupid since there’s clearly no honor in looking like a
jackass. 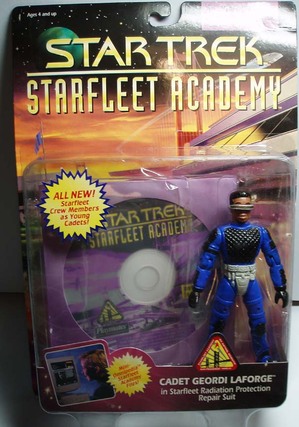 Packaged with a CD-ROM–which ran on Windows 95 no
less!–Playmates’ Starfleet Academy line of figures included what was
intended to be young versions of Picard, Riker, Geordi and Worf. Each varies in
degrees of dreadfulness, but La Forge tops all of them. The sick minds of
Playmates’ developing staff decided that he would strut around campus in a
silver codpiece. It was probably one that he engineered to do all sorts of
kinky stuff to that Brahms girl in his Temporal Causality 101 class. Creepy. No
wonder dude couldn’t ever get laid. 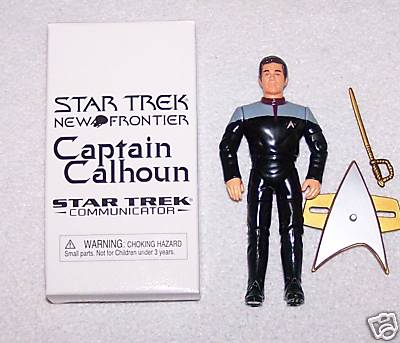 Captain MacKenzie Calhoun is the focal point of the Star
Trek: New Frontier expanded universe books and other non-canon hooha. He
looks like the British guy from Empire Records, but there’s no Rex
Manning Day-style fun when Calhoun’s on the bridge. He’s a no-nonsense kind of
guy who never met a problem he didn’t…wait, who the fuck is this guy? For the
record, this Cool Rider-looking douche got a figure and Bele the Cheron didn’t.
Do you need anymore of a reason to focus your nerd rage on him? 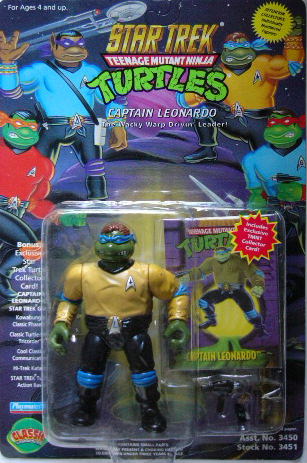 There’s nothing overtly offensive about having the Turtles
play dress up as the Enterpise crew, but the whole thing just reeks of
corporate synergy run amuck (at the time this was released, Playmates held both
the Trek and T.M.N.T licenses).  The box claims that Captain Leonardo is the “wacky
warp-drivin’ leader” of the Trek turtles. As such, he’s the one who’s
getting called out for being the most pointless of the four. According to the
ad for the figures, the origin for these plastic travesties is that the Turtles
were sitting around watching Star Trek when an electrical storm beamed
them aboard the Enterprise. It then goes on to claim that they are “totally
collectible, dude.” Jesus Christ. Let’s just be thankful that Pizza-Eating
McCoy never saw the light of day. 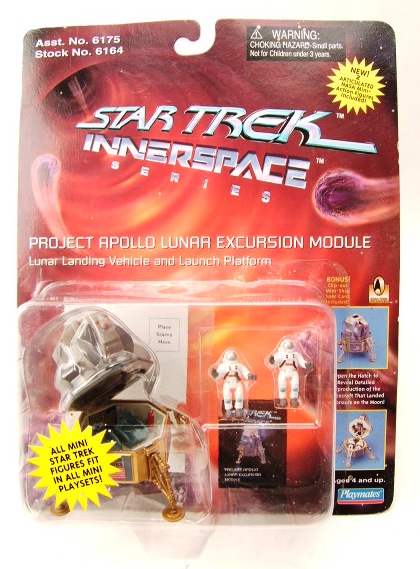 Except for the astronaut who put on the diaper and planned
on driving all day to kill her boyfriend, real-life space explorers are boring.
Issued towards the end of the Innerspace Series assortment of miniature
figures and vehicles, the Project Apollo Command and Service Module came with
two astronauts that allowed kids to recreate the moon landing. No disrespect to
NASA intended,  but there’s no way
anyone was buying this set over the mini Enterprise and Borg Cube toys that
were also featured in the line. You can have fun with generic astronaut figure
if you pretend that the Borg traveled back in time to screw around with the
Apollo 11’s mission and assimilate Neil Armstrong. Come to think of it, that
would have actually made a great Voyager episode.  No, they were too busy having
adventures in the Delta Flyer. Fuckers.