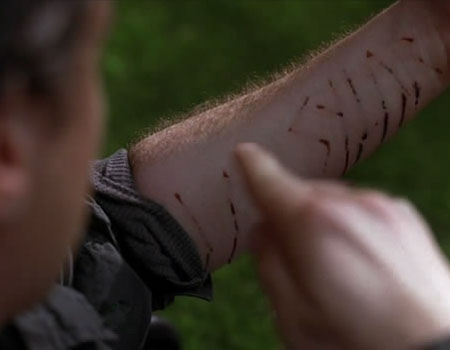 No, Sylar! Don’t do it! Tonight’s the long-awaited season finale of Heroes,
which means that even if it doesn’t get any better — and despite that
one awesome episode Bryan Fuller wrote a few weeks ago, there’s no
reason to think it will — at least after tonight it’ll be over. Then
we can beginning the healing process and see if we’ll be emotionally
ready to give a fully Fuller-planned fourth season of Heroes a try.

Obviously,
with my arm fucked, my chatting will likely be minimal tonight, but I
beg you to come by at 8:50 pm (EST) anyways. Both for your fellow
livebloggers, and because you guys are generally funnier than I am
anyways. We’ve made it this far, haven’t we? Plus, someone’s going to
die tonight. At this point, I’ll be happy no matter who it is.