Menu
Home
>
Miscellaneous
>
Sh*ttiest Videogame Adversary: And the Winner Is..

Damn you all. I don’t know how in the hell I’m supposed to adequately judge contests like this when probably half of you tied for first place. Here’s the honorable mentions — although I should point out that these are some of the ones that made me laugh, and many others still had great entries. Don’t hate me.

? Gabby for “You can toss the poisoned rice on the other side of a river of lava and
these guys will walk through the lava and catch on fire just to try to
get at the snack.”
? Mr. C for “It’s kind of depressing looking at Robotnik in this light,and makes you
realize Sonic was kind of a dick for regularly indulging him.”
? Enter the Moose for “Think of it this way, Bob the Killer Goldfish is such a shitty villain,
he gets eaten by a creature that doesn’t even have a mouth.”
? Kayla for “That little kid who wanted the RE5 game at the EB in my mall. First of all, you’re six. Where’s your stupid mother?”
? Davelog for “The little saucer in Asteroids. Sometimes it even shoots you from off-screen. Bastard.”
? badNflu3nce for “That Lon Lon Milk came from cows grazing field grass that was
fertilized by corpses. You are drinking someone else’s grandma, just to
get three heart back.”
? THE PR0F3550R for “If you got killed by Clyde then essentially it was like being killed by Sling Blade armed with a banana.”
? Asat for “Got the chalice? Three seconds away from the yellow castle? Gonna
finish the game in record time? No you’re not. You’re holding a white
key now, sucka.”

And while she’s mentioned above, I would be remiss not to call out Kayla for hating children so entertainingly; while she’s not getting a shirt, she should be somewhat content knowing she made dozens of nerds fall in love with her on the internet. And now for the winners, and yes, there are two. Here’s the first: 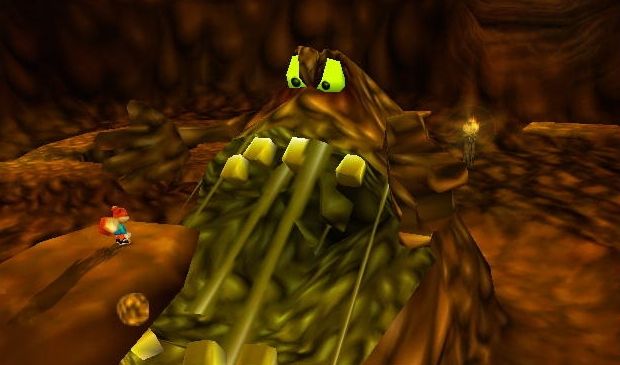 ? Evan for “I am going to go with The Great Mighty Poo from Conkers Bad Fur Day. It is a giant pile of shit. By definition, it is the shittiest video game adversary.”

Nice technicality, Evan (dickweed). Despite the many votes for Evan, I felt bad just giving it to him, so here’s a winner that actually played by the spirit of the rules of my spurious internet contest:

? Adam E., for: “Peepers, from the great Final Fantasy VI. They’re the most pathetic enemies
I’ve ever seen in a video game. They have a single hit point, which
means they’re weaker than the enemies you fight at the very beginning
of the game. Any attack you hit them with will kill them. But what really makes them so measly is that they’re already
poisoned when you begin the fight. Remember, these enemies only have 1
HP, so this means that Peepers die as soon as they take damage from the
poison. Consequently, you don’t even need to attack them to beat them.
They just die spontaneously.”

Congrats, you two. The rest of you, feel free to rage in comments about my choices. Since I’m giving away free t-shirts in a contest of my own devising and judging, it feels great to know that I’m doing it all wrong.