For some reason, the Power Rangers franchise has yet to find
its way into the upper echelons of cherished childhood memories. Perhaps the
generation that grew up on Megazords and Rita Repulsa is still too young to get
nostalgic and buy the show in convenient DVD box sets. Perhaps the constantly changing
Power Rangers series and characters make it hard for an entire nation of kids
to attach themselves to Green Rangers as they might idolize Goliath or Dinobot or
Pikachu. Perhaps Power Rangers is, in all of its forms, a really terrible thing
and every kid realizes that upon turning eleven.

Let’s set aside the question or whether Power Rangers is
under-appreciated or worse than Stunt Dawgs. Even if Power Rangers were
terrible, the popularity of the show still brought about many beneficial
effects back in the 1990s. And now, as the Power Rangers juggernaut possibly takes its final lumber through toy aisles and Disney-owned syndication deals everywhere, let’s
take a look at just what it did for pop culture.

As young fans of Mighty
Morphin’ Power Rangers learned sooner or later, the 1990s series is a
Japanese show re-dubbed and spliced with new footage to make it palatable to
American sugar-cereal-feeders. Those who dug deeper found that Power Rangers is part of a long
tradition of “super sentai” shows, which in turn are part of the entire
Japanese tokusatsu school. Wikipedia defines tokusatsu as “live-action Japanese
film and television dramas that generally feature superheroes and make
considerable use of special effects.” A more apt description would be “grown
men running around in spandex costumes while fighting giant puppets and people
in monster suits, all framed by effects that would’ve been low-budget by 1970s Doctor Who standards.”

Yes, tokusatsu movies and television are often marvelous
camp, and Power Rangers introduced many children to this world of rubbery
aliens and stiff robots and complete cheese. Most kids see a Godzilla movie or
two while growing up, but Power Rangers made tokusatsu into flashy, coveted
lunchbox-cover material. And even after the allure of Power Rangers faded,
those kids were more likely to notice Japan’s silly superhero and monster exports,
whether they were Godzilla: Final Wars,
the old tokusatsu version of Spider-Man, or just some sentai-hero moments that
were a little too extreme for American TV. Moments like this:

During the 1980s, the likes of Transformers and G.I. Joe
played up action and conflict to the point where the animation industry got a
little sick of it. As the decade closed, the most popular cartoons were comedies
and lighthearted adventures, including the often limp satire of Tiny Toon Adventures and the filthy
capitalist escapades of Duck Tales.
Even the Ninja Turtles punctuated their battles with a repertoire of self-aware
quips. Kids had Batman: The Animated
Series by 1992, but Batman was familiar territory. Kids wanted something
new.

Well, they got that with every Power Rangers episode. It
looked like Saved by the Bell with
its Archie-esque drama mixed with clips of a Japanese superhero series, but it
had plenty of violence.

Bloodless and really stupid violence, but it was still
violence without any cutesy Disney cop-outs or sarcastic one-liners to break
the fourth wall. Just punching and kicking and other things that you could
easily imitate on the playground.

6) It Made Parents Accept Pok?mon and Dragonball Z

Parents, teachers, and child psychologists grew to hate the
Power Rangers. It wasn’t just the violence, either. In the flailing battles
between the Rangers and various garish-colored creatures, the older generation
saw the many hokey monster flicks of their childhoods, and they decided that
they weren’t going to let their own spawn be won over by something with even
dumber stories and more aggressive marketing. Most parents didn’t complain about
Power Rangers any more than their own parents had scoffed at Speed Racer or the latest from Sid and
Marty Krofft’s House of Abominations, but everyone was clearly relieved when
the Power Rangers hype eventually died down and gave way to another Japanese import:
Pok?mon.

Never mind that
Pokemon was Nintendo-sponsored cartoon cockfighting. Pokemon had cuddly animals and a theme song about teaching each
other some semblance of morals. Heck, even the Vatican approved of it. This
parental attitude applied to other Power Rangers successors, including the
considerably more gruesome Dragon Ball Z.
For some reason, the PTA is less likely to throw a bitchfit over pure nonsense
and rampant violence when it’s animated.

5) It Helped Show Everyone How Awful Fan?Fiction?Could Be?

?at Topless Robot, we strive to explore the depths to
which modern fan-fiction can sink. However, there was a time when fan-created
stories weren’t held up to widespread mockery; they were kept within the pocket
online communities that specialized in writing and giggling over stories about Goku
kissing Captain Picard. The more level-headed of us were bound to encounter
truly disturbing fan fiction sooner or later, and by chance most encountered it
through a notorious tale called “Agony in Pink.”

The story first appeared on Usenet in 1994, courtesy of
someone known as The Dark Ranger. It can summarized as follows: the Pink Ranger
is tortured and ultimately murdered by a monster named Tortura who, needless to
say, was created exclusively for the narrative. It’s a disturbing journey
through graphically described sadism, and the fact that it’s all based around
Power Rangers makes it both disquieting and laughably absurd. In the 15 years
since its publication, “Agony in Pink” has become a touchstone for all terrible
fan fiction, and it’s even the subject of artwork and amateur MST3K treatments.

It’s easy to find all sorts of uproariously bad fan fiction
nowadays, based on anything from Mr.
Belvedere to Swat Kats, so it’s
hard to remember that “Agony in Pink” once shocked or stupefied anyone. But it
did.

4) It Brought Children Together

Let’s face it: most of the respectable children’s shows of
the 1980s and 1990s didn’t really inspire followings as much as the mercenary
ones. Duck Tales never had kids
arguing over who got to be Uncle Scrooge, but He-Man and every toy-shilling series after it was packed with
characters that impressionable youths could imitate, arguing over who got to be
Man-At-Arms and who was saddled with the Orko role. This tradition faded in the
1990s as the Ninja Turtles fell in popularity, but Power Rangers brought it all
back. 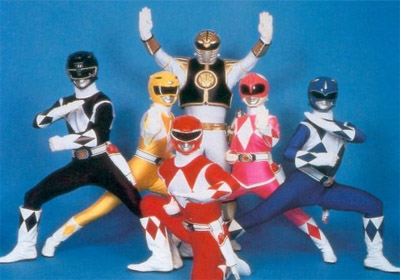 Once again, grade-schoolers could bicker over their favorite
roles from a TV show, and they had at least six color-coded parts to assign. Unlike
the majority of action-oriented kids’ shows, there was more than one character
for girls to emulate in schoolyards everywhere (yes, the yellow ranger was male
in the Japanese version, which for some kids was like finding out about all the
kittens that died to make Milo and Otis).
Even if you were delegated the part of the nerdy Blue Ranger, you could still
run around and demonstrate Power Ranger techniques until someone had to visit
the school nurse. And that’s what children’s shows are really all about.

Just as Teenage Mutant
Ninja Turtles gave rise to uninventive twaddle like Pre-Teen Dirty Gene Kung-Fu Kangaroos, Power Rangers had its
also-rans. The one difference: most of the Power Rangers rip-offs were put out
by the show’s handlers at Saban Entertainment, which wasn’t about to stop at
just one amalgamation of Japanese sentai superheroes and new American footage.
So the airwaves saw VR Troopers, Masked Rider, The Mystic Knights of Tir Na Nog, and this…thing.

Of these Power Rangers clones, VR Troopers and the even more insipid Beetleborgs proved the most enduring, as Saban desperately tried to
find more inexpensive and unrelated Japanese shows to cut-and-paste into
American properties. One has to feel a little sorry for Masked Rider. It’s a late-1980s sample from the Kamen Rider franchise, which has legions
of TV series, films, and toy lines to its name in Japan. In North America, however,
it lasted only half as long as a show about Goosebumps
brats turned into metallic roaches by a spectral, blue-faced Jay Leno.

2) It Inspired Some Great Parodies

Mocking Power Rangers and the broader world of sentai shows
is a little too easy. Stick characters in colored outfits, throw them in a
robot, start the discount fireworks, and you’re a champion of satire. It’s been
roasted to death in Japan’s cartoons and live-action shows for decades, and
most of these take-offs are downright lazy. A few are amusing, though, and a
brief anime series called Shinesman stands
out among the better ones.

Shinesman is a
parody of sentai run through the Japanese salaryman aesthetic, with a young
go-getter chosen as the leader of a superhero combat team just because he likes
the color red. Armed with sharp-edged business cards, his fellow armored Power Rangers
look-a-likes include Shinesman Gray, Shinesman Salmon Pink, and Shinesman
Sepia. Yes, it’s contrived and obvious comedy, but it’s saved by a rather
liberal approach to the English dub, which isn’t afraid to play up the
silliness of it all and invent some new jokes along the way (even if any and
all South Park references stopped being funny in 1999). And, unlike many
alleged anime comedies, Shinesman‘s
over before it can wear out its welcome.

As an hour-long comedy based on a much longer manga, Shinesman would have been made even if
Power Rangers had flopped in America. In fact, Shinesman might have been released in English even without any
Power Rangers pull, since its North American publisher, Media Blasters, bought
just about any cheap, short, direct-to-video anime in the late 1990s. Yet Shinesman and its dubbed treatment
wouldn’t have carried as much appeal without a cultural fixture like Power
Rangers for a target.?

1) It Got Kids to Love Giant Robots Again

Since the days of Gigantor,
robots have risen and fallen in favor among young American generations. After
reaching an apex of popularity with the Transformers
and dozens of imitators in the 1980s, robot-centric toys and cartoons slid out
of power, dethroned by the Ninja Turtles and, shockingly, cartoons that weren’t
even built around toy properties.

Power Rangers smashed these idols of taste and artistic
value. The Rangers had giant robots that formed an even more giant robot to
combat equally giant monsters, and all of them were perfect for toys. Voltron had done the same thing for
children of the 1980s, but it was never the toy-department wonder that Power
Rangers was. Kids could get figures of the Power Rangers, the various
creatures, and, most importantly, the huge megazord mecha and its ultrazord
accoutrements. And they would break through the load-bearing walls of your
home.

These robot dinosaurs and apes helped rally other
mecha-based toy lines back to the front. In the years after Power Rangers
became huge, Transformers returned
with Beast Wars, and even Voltron came back with a CG remake. It
may be Voltron that’s remembered in
the West as the quintessential giant mecha piloted by a team of kids, but it’s
Power Rangers that reminded everyone why kids loved big robots.