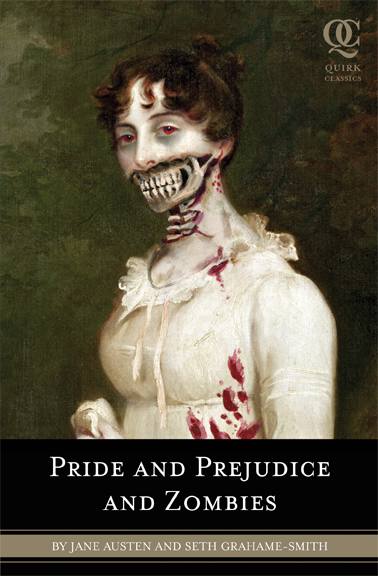 Short version: This book is awesome. Actually, it’s also brilliant, and I don’t think that’s hyperbole — it’s genuinely amazing how skillfully author Seth Grahame-Smith has inserted flesh-eating zombies into Jane Austen’s literally classic, and created a book that is still utterly Pride and Prejudice, but is also hilarious and massively entertaining. If you know you’re going to read the book — which is out today, by the way, no matter what Amazon says — you might want to skip the full review, because there are some spoilers. But if you’re at all on the fence, hit the jump and learn why you need to buy P&P&Z immediately.

If this snippit doesn’t make you want to immediately run out and buy Pride and Prejudice and Zombies, I don’t know what hope there is for you:

As guests fled in every direction, Mr. Bennet’s voice cut through the commotion. “Girls! Pentagram of death!”
Elizabeth immediately joined her four sisters, Jane, Mary, Catherine, and Lydia in the center of the dance floor. Each girl produced a dagger from her ankle and stood at the tip of an imaginary five-pointed star. From the center of the room, they began stepping outward in unison — each thrusting a razor-sharp dagger with one hand, the other hand modestly tucked into the small of her back.
From a corner of the room, Mr. Darcy watched Elizabeth and her sisters work their way outward, behading zombie after zombie as they went. He knew of only one other woman in all of Great Britain who wielded a dagger with such skill, such grace, and such deadly accuracy.

See, in P&P&Z, the zombie plague has been menacing England for some time, so there’s no sudden attack, no shock at the dead rising from their graves. This also means that the forward-thinking Mr. Bennet had his daughters trained by an insane Chinese martial artist –in China, a la Kill Bill — for several years, to hone their combat skills and giving Elizabeth a sense of honor that requires her kicking Mr. Darcy in the goddamn head after he insults her and her family not long after their first meeting.

The fact is, P&P&Z is at least 70% just Pride and Prejudice. There are no new characters, no wildly divergent story lines, and there’s even the same number of chapters. Maybe a couple of characters’ fates have been altered slightly — hideously, but slightly– and they’re still very much in line with the original. Even though there are countless zombie attacks and plenty of fighting, Grahame-Smith has so deftly weaved awesomeness into Pride and Prejudice
that I have no doubt that you could read it instead of Austen’s original, and still get a B on a book report,
at the very least.

Some of you may read the book and wish it had more zombies, or wonder why some of the boring relationship stuff didn’t get edited down, but then it wouldn’t have been Pride and Prejudice. Oh, if he had added more fights, or just had everyone massacred by zombies, I’m sure it would have been a funny book. But Grahame-Smith really altered the original just enough to still leave Pride and Prejudice intact, and that’s why I say it’s brilliant. Think about it: The crazy Chinese martial artist sense of honor meshes perfectly with
the Victorian sense of propriety. Elizabeth’s headstrong nature is
perfectly represented by her unladylike killing skills and thirst for
combat. Incredibly,  P&P&Z has the same themes, the same message, and teaches the same lessons as the original literary classic, and that is also why it’s brilliant.

Do not hesitate to pick up this book. For all of the reasons above. And also because the book could have easily been called Pride and Prejudice and Zombies and Ninjas.

“My dear girl,” said her ladyship, “I suggest you take this contest seriously. My ninjas will show you no mercy.”
“Nor I they,” [said Elizabeth.]

Oh. Did I mention the illustrations?