James Cameron’s The Terminator is not only a classic movie but a low-budget filmmaker’s wet dream. This is because the recipe that Cameron concocted for Terminator is simple  — evil robot, damsel in distress, some guns, some mildly competent make-up FX, synthesizer music, a beefy
European who can’t act, and set to boil in an abandoned factory or
vacant building and voila — but with an immense potential for box office success, meaning that countless filmmakers have copied it for their own. Of course, very few people are the cinematic chefs that Cameron is, and thus, their Terminator-inspired usually end up less as “modern sci-fi classics” and more as “horrible, shameless rip-offs.” Here are the 10 worst offenders.


Nemesis, made in 1993, is the actually most intentionally fun movie of the bunch. The story of a half-cyborg police officer questioning his humanity while chasing down a rogue ex-partner in the bleak future has some fun and inventive action scenes, including one where our hero shoots his way through several floors, Looney Tunes-style. It’s not a cinema classic by any stretch but a damn fun couple of hours and let’s face it, Tim Thomerson just makes every movie a little classier.


Directed by Charles “Full Moon” Band, 1990’s Crash and Burn should be called Bait and Switch. It’s video box and trailer promise tons of giant mecha action, but the majority of the contents feature a predictable game of cat and mouse with a killer cyborg in a futuristic TV station which looks suspiciously like a crappy old factory. You do get to see the giant robot go into action at the end but it leaves you wondering if it was at all worth it. (Answer: it wasn’t.)


A sequel in name only to Class of 1984 (although it has the same director) and made in 1992, Class of 1999 takes place in a bleak future America, full of gang-controlled hot zones. The “Department of Education of Defense,” led by a scenery eating Stacy Keach, installs a series of cyborg teachers into the classrooms, including one that likes to give spankings (no, seriously). Of course, something goes wrong and the teachers become killing machines. The 1994 sequel Class of 1999: The Substitute is essentially the movie The Substitute with a killer cyborg, which sounds far better than it actually is.

“Tae Bo” shill Billy Blanks stars in this futuristic 1994 opus rocking his best “Kid N Play” hairdo. The world has once again gone to shit and everything is settled with martial arts fights in factories and warehouses. Somewhere in between the endless fight scenes, Billy’s partner is turned into a cybernetic killing machine. Many of this film’s stars are competent martial artists, which explains the incompetency of the acting. 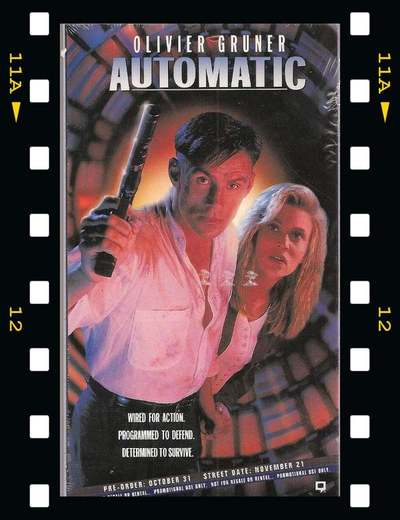 Nemesis star Oliver Gruner certainly found a niche playing cyborgs, as he also stars in this 1994 film as “The J Series Automatic.” “The Automatic” accidentally kills an executive of his company who was trying to rape a woman, forcing the two of them to flee for their lives. The rest of the film devolves into low-rent chase scenes and action sequences, predictably.

With a title this fantastic, how could this be bad? In this ’92 flick, TV Tarzan Joe Lara escorts the last pregnant woman to Europe all the while being chased by being pursued through more warehouses and factories by a deadly cyborg, who appears to be proudly made in the good old US of A. A lot of people will take note that Children of Men is essentially a remake but that film stupidly removed the cool “Cyborg vs Highlander-looking Martial Artist Dude” subplot.


A renegade cop (is there any other kind in these movies?) goes to the tropics to find his long lost brother, who has been transformed into a cybernetic killing machine by a mad scientist in this ’93 movie. As the cscientist, John Rhys-Davies seems to be under the impression he’s filming an episode of Gilligan’s Island as his performance has to be seen to be believed. The unconvincing cyborg baddy is how you’d imagine an 8-year-old would draw one.


Italian filmmakers are known for taking copies of popular American movies, and the results are almost always both strange yet insanely entertaining. 1986’s Hands of Steel doesn’t disappoint with its titular cyborg assassin having a change of heart when sent to kill an environmentalist and turning to the sport of arm wrestling. That’s right, an arm wrestling cyborg. The usual mayhem occurs with our titular hero using his cybernetic limbs to twist a few heads off.


When a trailer starts with the words “In a world where laws are enforced by cybernetic police officers…” you know what you’re getting. 1994’s CyberTracker and its never requested sequel CyberTracker 2 pits good cop Don “The Dragon” Wilson, who learns too much about the evil Cyberco’s nefarious plans and is forced to go against their army of — you guessed it — cybertrackers. The usual poorly filmed explosions, car chases and early ’90s hair follow. Like so many of Don “The Dragon” Wilson’s movies, it went directly to video
stores or Cinemax and became that movie you saw one night while drunk
and can’t remember.

A movie that dared to combine kick boxing, terminators and dinosaur puppets into one incredible cinematic masterpiece! In 1992’s Future War, a cheap photocopy of Jean Claude Van Damme is a slave from the future, who scissor kicks his way into present day Los Angeles and meets a prostitute-turned-nun. Alas, his cyborg masters begin hunting for him, with help from their puppet dinosaur pets; many battles in warehouses ensue, where many empty cardboard boxes are lost. It’s no surprise that this is a favorite among Mystery Science Theater fans.