A lot can get lost in translation between a pair of chromosomes and a pair of tights. Just look at the super-powered population. Male heroes who hit a certain level of popularity almost always find themselves staring down their female equivalent. While some extensions of a heroic legacy, such as Mary Marvel of the Captain Marvel family, seem appropriate, other executions of super female companions or counterparts have ranged from lazy to straight up insane. Read on to better understand why, when it comes to exploiting an established super hero property by spinning a character into female form, womankind – nay, humankind, simply deserves better.

Before I get started, let’s all just agree that there are, like, 15 Spider-Woman/Spider-Girl characters floating around. Jessica Drew, the most popular and arguably most important of the bunch gets a pass due to Brian Michael Bendis and other Marvel bigwigs’ undying love, an animated series from the ’70s and all of the relevance that comes with that. The other ladies? Not so much. One might argue that since most of the Spider-Women are similar to Spider-Man in name only (with the exception of “Ultimate Spider-Woman” who is a female clone of Peter Parker) they stand on their own as independent concepts. However, given the webbed ladies’ propensity to cross over with Marvel’s resident cash cow, it’s a safe bet that most were conceived to expand the Spider family and give nerds everywhere a curvier character to crush on. Well, except for Madame Web. *shudder* Not quite Supergirl, definitely not Superwoman, this dud is the lamest of Superman’s watered-down Kryptonian descendents (in a list that includes an angel, a digital being, a magic girl and a genetically-enhanced human). Aside from her successful stripper ensemble, Laurel is so forgettable that her Legion of Super Heroes appearances exist only to wipe her from reality. It’s as if the storytellers that brought her to life spent every minute afterward trying to hit a yet-to-be invented “undo” button. Is she a descendant of Clark Kent? Is she a crazy robot? Is she even there at all? Nobody knows for sure since she’s been erased from the official DC canon. Somewhere out there, all three Laurel Kent fans weep.

Even though Golden Age Batman might’ve had a few too many “papa spank” moments with Robin, one thing the guy never needed was a needy stalker with a purse to confirm his heterosexuality. Every billionaire playboy should have a bikini-briefed young ward at his disposal. It’s just protocol, really. Despite this misunderstanding, Silver Age Batwoman had the misfortune of existing solely to smooch on the Dark Knight, later being scoured from modern continuity to make room for an updated Batgirl – a character that didn’t hinge on every possible gender stereotype. Whether or not the original Batwoman was merely a sad product of sexist times or an innocent gaffe at the circumstances of her forced conception, her irrelevance is a happy reminder that function should never follow form. So celebrate the modern Batwoman, who could not be less interested in hooking up with the Bat-boys and has motivations and personality traits all her own. Plus, she’s not afraid of mice. A whiny and underdeveloped annoyance, Miss Martian would be a real contender for number one if her male counterpart, Martian Manhunter, hadn’t met his untimely demise in last year’s “Final Crisis” event. With an enjoyable hero out of the way, somebody has to fill the Martian void left behind by a swath of flame and a sharp object. Unfortunately for everyone, it’s a White Martian struggling with her latent capacity for evil. Miss Martian’s dualism could be interesting under the right conditions, but so far her appearances have seemed hastily written. All she’s really done is get knocked around by super villains and have nervous breakdowns, just not in a cool, Spider-Man way. Perhaps someday Miss Martian will develop into a likable standalone character, but for now she just feels like an afterthought.

To be fair, Thor Girl’s origin isn’t much sillier than that of alien-turned-Asgardian Beta Ray Bill’s. It’s worth noting, however, that BRB wasn’t given insanely inflated importance. Thor Girl is really Tarene, a kind of cosmic deity destined to evolve sentient beings to another state of existence. Thing is, she would rather turn herself into an Asgardian and beat up criminals for kicks. Later on, Tarene loses her cosmic edge and has only the power of a Thunder God to get by on. Poor thing. Thor Girl has found some semblance of redemption recently in the pages of “Avengers: The Initiative,” but given that her most recent incarnation was revealed to be an evil, shape-shifting skrull, it looks like TG still has some making up to do. Maybe this time around fans will have more to identify with.

With so many symbiotes squirming around the Marvel U, fans have every reason to be underwhelmed by the one-note “She-Venom.” (Perhaps “Venomess” would have been too haughty a pun?) The first “She-Venom” story is a dark tale that ends in the suicide of Eddie “Venom” Brock’s ex-wife. That’s an acceptable, if depressing and grim, use of the gender swap clich?. However, the second incarnation of She-Venom existed in a plot so complicated and cumbersome that fans might have thought they were reading some kind of Clone Saga. Scientists with robots cloning symbiotes and hating Spider-Man, blah, blah, blah, Venom with boobs, the end? Yes, the end.

Oh mid-’90s, you so crazy! With so much awful abound in Spidey’s world circa 1995, what with all the cloning and the hooded sweat shirt wearing, it’s no wonder this sloppy modernization of a flabby old man was so easy to accept. Doctor Octopus kicked the bucket? Cool, let’s take that high-concept TO THE X-TREEEEM by arming some random new chick with pink hair and tentacles that shoot lasers! All mocking aside, given the mess she walked into, Lady Octopus gets points for acknowledging her predecessor by helping to bring him back to life as part of an evil magic ritual. If only every unnecessary legacy character could do the same. 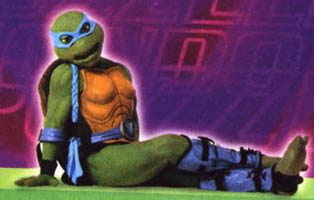 The fifth turtle to join Fox’s Ninja Turtles: The Next Mutation, Venus can only be described as the product of pure TMNT fan abuse. What’s the matter with a female ninja turtle? Nothing really. As demonstrated by countless anime and manga series, women make for some of the best ninjas possible. Problem is, the horribly ill-conceived Venus isn’t a ninja at all. She’s a diluted “shinobi” relegated to conjuring lame spells, speaking broken English and creating awkward sexual tension amongst her non-brothers. Yes, the producers of the show shattered sacred brotherly continuity by revealing that the turtles weren’t biological siblings. Oh, and what’s more, their “sister” who was with them when they were coated in mutagen simply wandered off, was adopted by a Chinese mystic and kept a secret from them for no reason at all for more than a decade. Mondo awesome secret origin! Now the turtles can tap ‘dat hot piece of shell without feeling incestuous! Even though this travesty came to an end upon the series’ cancellation, fans will never forget how close they came to a canonical Fan Fiction Friday-like turtle-on-turtle romance.

She-Thing was once Sharon Ventura, a young woman with dreams of hitting the big time in a super-powered wrestling federation. Like so many na?ve girls seeking fame and fortune on the mat, poor Sharon fell in with some shady mad scientist types who used and abused her with drugs, slutty costumes and combat training. Typical! Fortunately she hooked up with the understanding freaks in the Fantastic Four, who improved her life tenfold by exposing her to disfiguring cosmic radiation. Plenty of other, less hilarious, stuff has happened to She-Thing over the years, but what’s really worth mentioning is her scandalous one-panel tryst with her cohort in cragginess, Benjamin Grimm. The abominably cute pair snuggled during Ben’s dinosaurish days and the fuglies even spawned children together in an alternate future, proving that Marvel Comics really does want everyone to guffaw at its Things. Go ahead, guffaw!