Menu
Home
>
Comics
>
There Might Be a Daredevil Reboot, and It Might Be Good Thanks to Starbuck 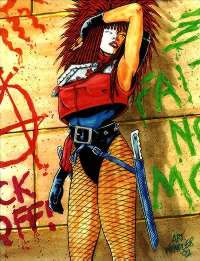 There’s been some talk in cinematic circles of Marvel making a new, non-shitty Daredevil movie; it’s a bold concept, but one Marvel finds intriguing. I don’t doubt the rumors; clearly, Marvel doesn’t mind retrying movies if the first one didn’t work (Hulk, Punisher: War Zone), and Daredevil is certainly on that list.

But the reason that everyone’s currently freaking out is because Starbuck, a.k.a. Katee Sackhoff, was spotted buying a shit-ton of Typhoid Mary comics in Golden Apple Comics in L.A. There’s been no rumors about Daredevil casting in general or Sackhoff casting in particular circulating, but c’mon — the only reason any one would walk into a comic shop and buy a pile of Typhoid Mary comics would be to get a role in a movie. It just doesn’t happen otherwise.

Since Sackhoff has done both batshit crazy and awesome asskicker to perfection in BSG previously, I’d say she’s a perfect Typhoid Mary, and automatically give a Daredevil movie with her in it the benefit of the doubt. Is there anyone who likes the BSG reboot who disagrees? (Via Comic Book Movie)