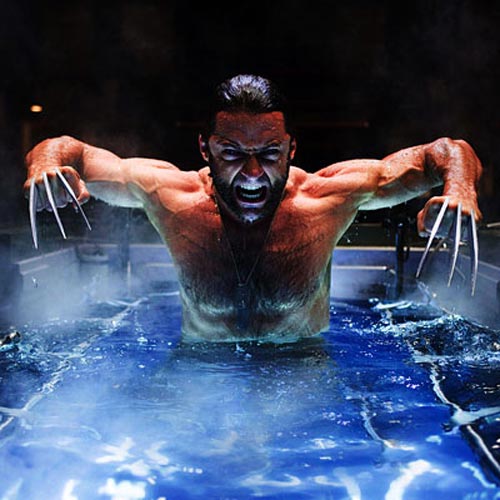 Short version: it’s a bad movie, but moderately enjoyable if you aren’t too attached to Wolverine (or Deadpool). If you liked X-3: The Last Stand, I have no idea why you wouldn’t enjoy this movie — while the plot doesn’t make much sense, there’s some pretty great action scenes. Hit the jump for the spoiler-filled long version, which hopefully for the sake of my (still busted) arm isn’t too long.

You know how most shows have an intro at the beginning, where a
narrator announces “Previously on!” and then they show the clips of the
bare, important facts you need to know? X-Men Origins: Wolverine is
like a 1:45-long “previously on” — it feels like there’s a lot of
scenes and dialog and context that was just removed. The film’s pace is
incredibly brisk; no sooner does lil’ Logan mistakenly kill his dad in
a rage than he’s off with his brother Sabretooth fighting in various
wars during the credits, eventually ending up in Vietnam with Stryker’s
mutant squad, where he — after more than a century of war and fighting
— suddenly has enough with war and fighting and Sabretooth’s evil ways.
It’s immediately six years later and he’s living with Silver Fox who
tells him some brutally stupid legend about the moon (which is clearly
supposed to have some relevance to Wolverine but I never figured it
out) and then gets killed by Sabretooth and Wolverine goes off for
vengeance.

The rest of the movie is stupid, but moves along so quickly that its
more makes no sense than insulting. Stryker suddenly arrives and offers
to cover Wolverine’s bones in adamantium so he can better kill
Sabretooth. Wolverine agrees, no questions asked. Stryker gives him the
skeleton, and then decides to brainwash him, which Wolverine hears,
freaks out, and runs off. Then Logan stays with Ma and Pa Kent until he
gets them killed, then hunts down his former mutant team to find
Sabretooth and Stryker, who he learns still employs Sabretooth.
Basically, then means a fight with the Blob and Gambit in succession,
then a trip to Three Mile Island where Stryker’s other evil
headquarters is (different from the Weapon X place).

There, Wolverine discovers Silver Fox is alive but pretended to be dead
so that he would agree to the Weapon X deal; Silver Fox had to do it
because Stryker had her sister Emma Frost held hostage (along with
young Cyclops and other nameless, unimportant mutants). Silver Fox is
killed, Wolverine and Sabretooth fight but then join forces to fight
Deadpool, Professor X rescus the kids, Stryker shoots Wolverine in the
head with an adamantium bullet whioch destroys all of his memories, the
end.

Which raises a few questions:
? Why did Wolverine suddenly, after 100 of fighting with Sabretoorh, decide he no longer liked fighting or Sabretooth?
? If the movie takes place 6 years after Vietnam, or 1981 at the latest, why is Cyclops alread 15?
? Why would Stryker coat Wolverine’s bones in adamantium but do zero
preparation to make sure Weapon X didn’t leave immediately after the
process? In the comics, there was a good deal of brainwashing first,
correct?
? Why does Stryker have two separate evil headquarters, by the way?
? Why bother to make Silver Fox and Emma Frost sisters? They look nothing alike, and none of the fans can be pleased.
? How does Cyclops control his powers with red sunglasses in school
(where he’s captured by Sabretooth)? If his powers haven’t awoken until
that scene, how did Stryker know to get him?
? Why doesn’t Professor X bother rescuing Wolverine when he saves all the kids?
? An adamantium bullet in the head won’t kill him but will destroy all his memories? Fucking really?
? Cyclops and Gambit and especially Sabretooth effectively know
Wolverine’s past pror to his memory loss, and Wolverine is actually
picked up by Gambit immediately after the Deadpool fight. What the fuck?

And that’s not counting the terrible moon legend, the weird Ma and Pa
Kent scene, and the really forced part where Wolverine and Sabretooth
talk about how important brotherhood is and make up, all of which is
dumb but none of which I have questions about. I guess the biggest
problem is that X-Men Origins: Wolverine fits in almost no way with the
other X-Men movies, especially the Wolverine/Sabretooth business, and
the ways it does fit is very, very sloppy.

I don’t think Wolverine is as dumb as Dragonball Evolution
by a long shot, and at the very least, it has some much better action
scenes, which makes up for a lot. But it is not, by any measure, a good
movie. I don’t regret seeing it, but neither am I particularly glad.
Oh, and I don’t know that you should bother with the “bonus” endings: I
got the Wolverine one, where he’s just having a drink in Japan, and the
Deadpool one just shows Deadppol’s arm crawling toward his severed
head, which opens its eyes, apparently. By all indication of the movie,
Deadpool is Weapon XI is Wade Wilson, who now lives at the end of the
movie, but still has his crazy sword arms and Cyclops’ eyebeams.