Everything’s coming up Wolverine these days! He’s got a new movie coming out (which is actually supposed to be focused on him, and not just sort of the way it turned out, like in the first three X-Men movies…), he’s on your television with the new Wolverine-centric Wolverine and the X-Men cartoon, he’s on your Slurpee cup, your razors, and he has a delicious cheese pizza and vanilla cappuccino to recommend to you. And it’s well-deserved. Wolverine is one of Marvel’s most popular characters, and unarguably the most popular character from any comic company since the 1960s, because between his healing factor, his adamantium claws and his bad attitude, he’s the quintessential badass. He’s cool. He’s awesome.

…at least most of the time. Fact is, while Wolverine is certainly the best he is at what he does, although what he does may not be very nice, sometimes it’s also a lot more embarrassing than it is awesome. Here’s the proof. 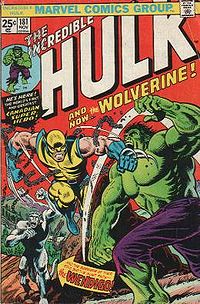 Okay, it’s his first appearance, and they were still working out the bugs. Or rather, no one considered the idea that this runty Canadian dude with painted-on whiskers would someday join Spidey as one of Marvel’s most enduring characters. But seriously, it’s amazing that Wolverine (who at this point didn’t even have a real name, let alone a backstory) survived this appearance — not just because he was fighting the Hulk and Wendigo, but because he wasn’t really all that interesting. The adamantium claws were cool, but he goes around calling the Hulk “sonny” (which is lame, though prescient given that he’d be ret-conned later to be over 100 years old at this point in his career). He also says that “moving is the thing I do best!” Fortunately, what Wolverine was best at was later changed, since on the heroic scale of being the best at something, “moving” is just barely above “wading” and “telling analog time.” 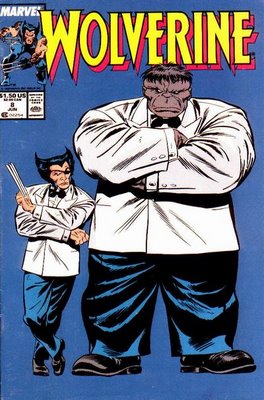 The fact that Wolverine called himself “Patch” during this period is stupid for several reasons, not the least of which is that “Patch” is a dude from Days of Our Lives, not Marvel comics. (Equally as important is that for all of Wolverine’s cunning, he wasn’t fooling anyone by just dressing up like a pirate and changing his name.) Sure, he could still be a fighting force with which to be reckoned, but this was the storyline in which Wolverine supposedly learned — and most definitely spent too much on-page space reflecting on — his basic humanity: his compassion, his generosity, his moral center. In other words, all the stuff he didn’t have back when he was the awesomely menacing loose cannon that readers first came to enjoy.

8) The Time He Was Actually a Wolverine

One of the first origins to a character that has had a lot of them — few of them official, mind you — was that Wolverine wasn’t a human at all, but an evolved wolverine. As in the animal. This would have involved the High Evolutionary, who brought us other great characters like Bova, who was the evolved cow who was the best at what she did, too — and what she did was nannying. It’s sort of a cool idea, but the fact that your badass fighter is in reality from the family mustilidae and is hunted because their skin makes good parkas? Sort of bursts the badass bubble.

7) The Time He Was a Deadbeat Daddy

In a very weird Gods Must Be Crazy set-up, Logan loses his lighter (a present from Nick Fury, natch), and goes looking for it — and, okay, the source of a cyborg assassin — in the Savage Land. He finds more than that, of course — namely, a comely chieftain in barbaric Conan-style named Gahck, who he promptly fights, defeats, beds, and (unbeknownst to him) impregnates. The fact that Wolverine’s first baby-mama has the same name as the sound his enemies make when he slices into them is a little too perfect. Based on this, we can only presume that the kid — who’s never shown up since, by the way — must then be named “Alggch” or “Uhhlct” or “Ohcrapyoustabbedme.”

6) His Utter Failure in Secret Invasion 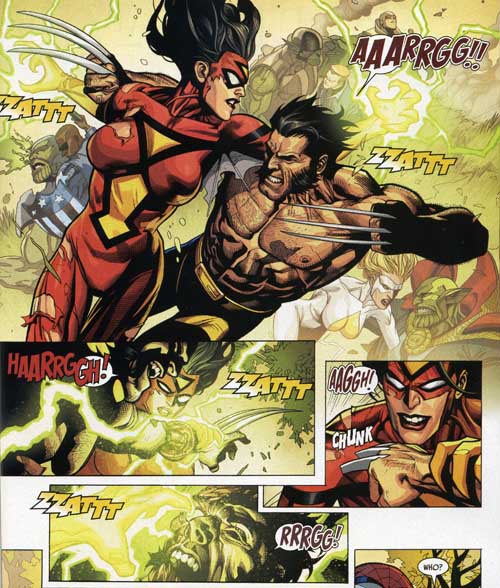 Can’t sniff out a Skrull? Beat to a kill shot by Norman freaking Osborne? C’mon, Wolverine. You’re not even trying anymore. 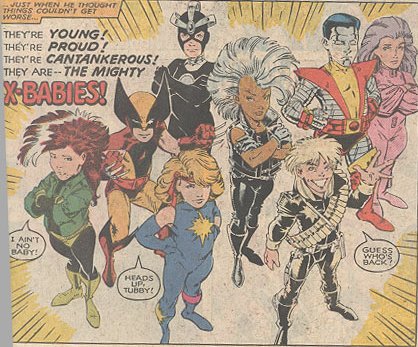 They are, or so it was claimed, young, proud, cantankerous, and mighty. But in reality, the X-Babies were the height of suck. The X-Babies were supposedly a play on the idea of infantilizing pop-culture properties (most particularly the Muppets, at that time) in the same way that Mojo himself was a parody of network ethics (not to mention a riff on several sci-fi storylines, including Stephen King’s 1982 novel The Running Man). But is it still a parody, really, if it’s diving full-on into the same fetid pool? (Not to mention that it’s a pool into which Chris Claremont seems to want to dip his big toe into all over again, every few years, most recently in Uncanny #461.) Do we need a Wolverine that says things like “Golly Gumbucks!”? Do we need a Wolverine that refers to his teammates as “Maggie-Neato” and “Lil” whatever? No. No, bub, we don’t.

4) His Darth Vader/Revenge of the Sith Impression 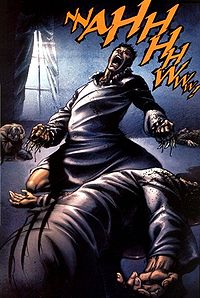 In terms of a story, Origin wasn’t all that bad. Sure, it had its weaknesses — it was too drawn out for its own good, and featured a Jean Grey clone (and X-history requires here that I don’t mean a real clone — just a lookalike to define Logan’s early and ongoing infatuation with redheads). The switcheroo of having Wolverine not be “Dog” Logan but the sickly Howlett son James was sort of cool — especially given the suggestion that James’ birth may be the result of an affair between his mother and Dog’s father, the groundskeeper Thomas Logan. But despite that, that first claw-popping moment in the second issue of the limited series is just fraught with the same sort of supposed-to-be-moving melodrama the of which the “birth of Darth Vader” scene from Revenge of the Sith is made. (And here we’ve been told that “moving” is the thing Wolverine does best.)

3) The Time His Evil Robot Adopted a Bomb Girl 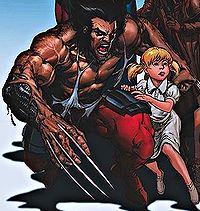 There’s not much to explain this very bad idea, other than to just tell the story and sort of let it stand on its own two sad little feet. The Robot Wolverine was created by Donald Pierce (who by this time had obviously seen better days as a character himself) along with another robot named Elsie Dee, who was basically a bomb disguised as a five-year old girl with an insufferably pointless pun for a name. Robot Wolverine was meant to draw the real Wolverine to a scene in which Elsie Dee would be trapped in a burning building (seriously — this was the plan), and when Logan entered said building to save her, Elsie Dee would explode, and kill him. (If this seems like a pretty convoluted mess of an evil scheme, then congratulations — you’re smarter than Donald Pierce.) This less-than dynamic duo survived — Elsie Dee disarmed herself because she came to understand that Wolverine didn’t deserve to be blowed-up, and then named her robot Wolverine friend “Albert” — and the two still wander the Marvel Universe as this sort of Bizarro version of Wolverine himself and whatever young girl with daddy issues that he’s taken on this week. Not a bad storyline for, say, Archie comics… but definitely the sort of cutesiness one doesn’t expect to find in a Wolverine comic. 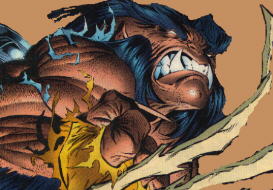 Sort of ironic that Wolverine, who boasts tracking and heightened sense of smell as two of his main heroic characteristics, would find himself noseless. This was during his no-adamantium days, after Magneto had pulled it all out through his pores (ouch), and left him with (da-da-da-dum) bone claws! Which were somehow rounder than they’d ever been drawn by any artist ever before (or since), but you know, whatever. Wolverine got more feral, more animalistic, and a lot more manga, which was supposed to be a new height of badassery, but all he ever seemed to do, really, is snarl, hunch, and drool. This new look was sort of explained (as much as anything has been in the X-books since the 1980s) as having something to do with the loss of the adamantium itself, or his healing factor going into overdrive, or his “secondary mutation”, but like a lot of mutant storylines, just sort of… went away after a while. It’s sometimes just a look that’s chalked up to artistic license — but really, can just plain not drawing body parts that should be there be rationalized as “artistic license?” If you’re not Rob Liefeld, I mean.

1) When Power Pack Taught Him Everything He Knows 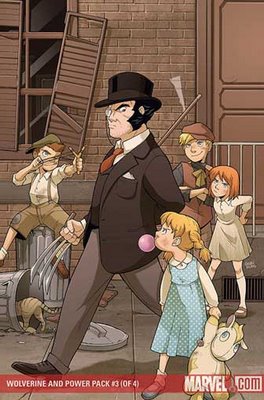 The most recent entry on this list, Tween Wolverine is met in early 20th-century New York City by the members of Power Pack — yes, Power Pack — who teach him all about being rough-and-tumble when he needs to be. Yes, that’s right: Power Pack taught Wolverine how to stand up for himself. The least badass characters in the entire super-powered 616 taught the most badass character in the 616 “how to kick some butt.” Oy. That is some time-warped logic. Granted, I’m not sure that Power Pack comics are meant to be in continuity (though there’s nothing in the book saying that they’re not), but just the idea of it makes it hands down the winner on this list. And check out the last panel of Wolverine/Power Pack #3, in which a young James is shown happily playing with his friends Dog and Rose — both of whom end up dying on the end of his claws. Golly Gumbucks indeed!