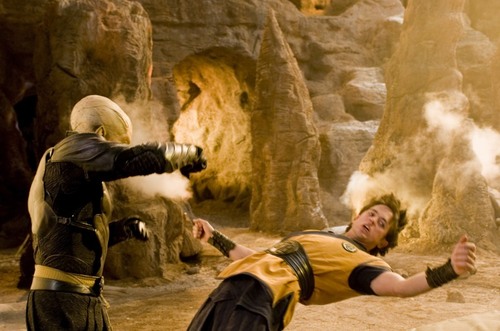 James Marsters told an interviewer that he’ll be filming the sequel to the much-reviled Dragonball Evolution
after he gets done touring with his band in Europe this spring and
summer. He’s just been told he can officially announce a sequel. Even
fansite DB The Move greets this news with gritted teeth, saying “Let’s just hope that if true, they treat the sequel with a lot more respect.”

Well, I called it. Hopefully, since there’s no writer’s strike this time, Fox will not get some scab who cobbled his dialogue from the Dick and Jane book series. Here’s also hoping that they move onto Dragonball Z and Raditz and Vegeta, since it should be much easier for them to adapt the straight action of DBZ over Dragonball‘s genuinely complex blend of action, adventure, comedy and weirdness. And finally, here’s hoping that I get hit my goddamn meteor before 2010, because this thing is going to fucking suck ass no matter what. Fucksticks.