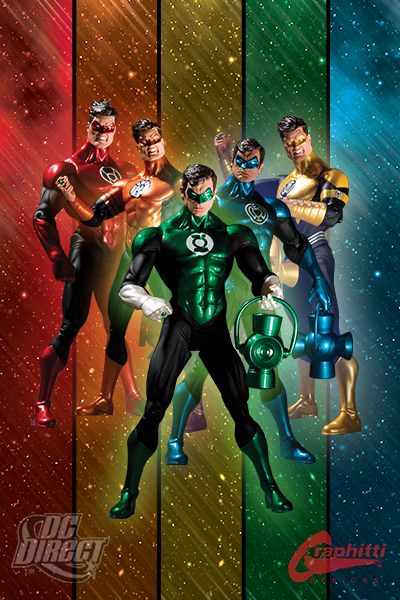 I’m not reading Geoff Johns’ almost unanimously well-liked Blackest Night saga over at DC, so someone needs to tell me — is Hal Jordan tasting the rainbow of other Lantern Corps? Or is DC Direct just offering an awesome what-if for San Diego Comic Con by releasing five exclusive Hal Jordan figures, one in his Green Lantern outfit, but also Red (Rage), Orange (Avarice), Yellow (Hate), and Blue (Blue Raspberry)? There will be one figure available on each day of the con, but each figure will be limited to 1500 pieces. Get all five, and you have a sweet set of packaging, as below.

But your chances of getting all five are incredibly low, especially if these guys actually have some comics continuity, because these things will sell out in about half an hour each day. Plus, even the least interesting figure — the Green Lantern one — will be available on the Wednesday preview night, for industry people and the few folks who ponied up to attend early. So that screws everyone else who wants to collect the whole set, or at least wants the section with Hal Jordan’s face on it. Jesus. (Via IGN)