A lot of early Dungeons & Dragons module-plots were more about scavenging then conquering.  It wasn’t about beating one central bad guy, but getting in, scoring some loot, and escaping with your lives to brag about it back at the tavern.  So many of the classic modules — The Sinister Secret of Saltmarsh, The Ghost Tower of Inverness, Expedition to the Barrier Peaks — have a wealth of minor bad-guys to wade through, but not one central villainous focus. On the other hand…some modules did.  And when they did, it got nasty.  Here are a host of the best bad guys of the original D&D modules–the ones who every party wanted a shot at.

The Slavers series (A1-4) is perhaps best remembered for the stuff that happens to the characters — mainly being railroaded into losing all their stuff and getting tossed naked into a dungeon — as they seek to end the local slave trade. But the bad guys themselves are pretty nifty in and of themselves, and if run right, pretty damn dangerous. If you can ignore the obvious Asian stereotype (which is easy now… thanks, Star Wars prequels!) High Priest Stalman Klim is pretty badass. Half-orc fighter-assassin (and hyphen master) Theg Narlot has some nasty poison (but really shouldn’t stand like that while wearing a loincloth). Edralve the drow fighter-cleric has sort of a Madonna boob-cone thing going on there, and Lamonsten the Illusionist doesn’t really look fully drawn… but such is his power of illusion! Slippery Ketta is laying down for some reason, but seems to be enjoying the view that Theg is providing. And Brother Kerin the monk brings us full circle back to “yellow peril.” And the best thing? They’re all standing there at the end of the module, trapped on a pier, surrounded by man-eating lacedons in the water. They exist at this point only to be killed and looted. Ah, original D&D! 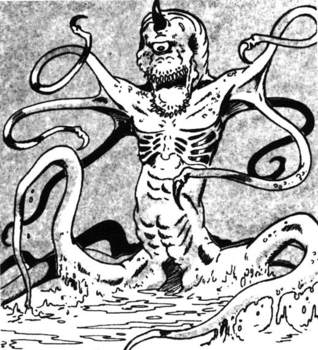 The “god” of The Lost City (B-4) wasn’t so much a god at all — rather, some sort of creature pretending to be such. What Zargon actually is is left unexplained, but it seems fairly clear that he’s Lovecraftian in inspiration, but still, the weird Cthulhu ripoff has created a pretty solid power base for himself, complete with ridiculous minions that dress up like birds and frogs and the like (honestly, that’s enough for most parties to off them, right there). The thing that makes Zargon a legend, though, (other than the requisite “Zargon, take me away!” jokes in-play) is that he was an 80 hit point end-boss in a module meant for beginning level characters. In other words? A god. Or close enough. 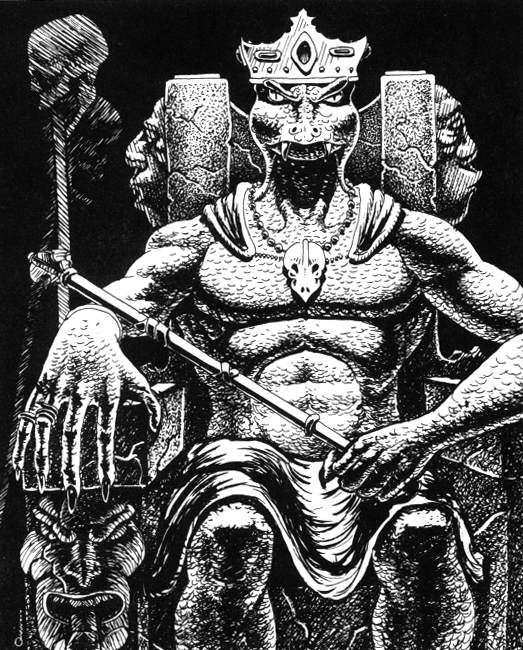 In Tomb of the Lizard King (I-2), players are hired to re-establish a trade route that’s been interrupted by brigand attacks. Sounds pretty straightforward — until they realize the real bad guy is no common bandit leader (and has nothing to do with Jim Morrison). Sakatha is a legendary lizard king who’s also a high level magic-user… and a vampire, to boot. This surprise — combined with the fact that he’s surrounded not only by lizardman troops but undead servants as well — makes Sakatha one of the more memorable villains of mid-level modules. That is, if you could beat it with mid-level characters, and stop humming “Riders on the Storm.” 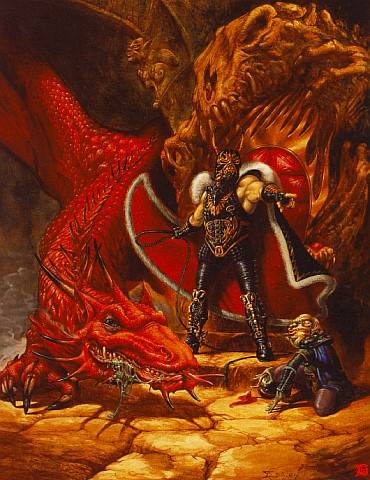 Verminaard was the best bad guy in Dragonlance (DL1-4), or at least the only one with any juice. Kitiara is pretty bad, but she’s somewhat sympathetic (or at least hot, which is sort of the same thing), and it’s never as much fun taking out villains that you sort of like. Lord Soth had the same issue — he was a little too cool with his massive undead power and tragic backstory sort of cribbed from Strahd von Zarovitch (makes sense, since Tracy Hickman created the both of them), and never really went directly against the Heroes anyway. Most players wanted to be Lord Soth, not defeat him. And then, in the end, there was Emperor Ariakas, but he was paper-thin and completely boring. But Verminaard is just a bad guy — an evil cleric with an evil name wearing evil wife-beater armor and wielding an evil mace called Nightbringer. Roll initiative, bitch. 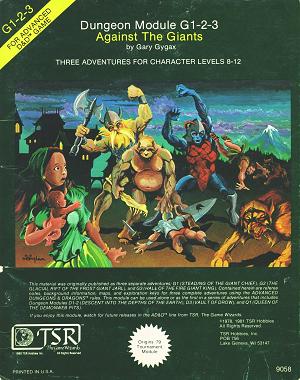 If you don’t remember them by name, you’ll remember their lairs. The Against the Giants modules (G1-3) were some of the most dangerous — and well-loved — modules in the AD&D canon, mainly because they’re a good stress test for any given party. If you can survive these three gauntlets of violence, you’re good to go. Graduating from the Hill Giants (the unfortunately named Nosnra) to the Frost Giants (Jarl) to the Fire Giants (Snurre) is a schooling that most adventurers gladly took. You really haven’t been adventuring if you haven’t dodged a giant boulder. 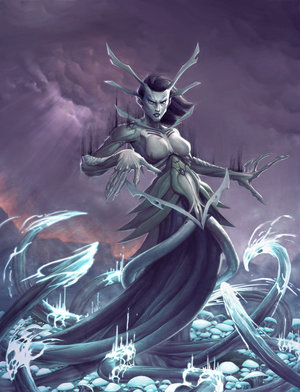 Okay, so the Temple of Elemental Evil (T1-4) was sort of bloated, definitely convoluted, but in the end, it was worth the wait. Zuggtmoy isn’t technically a goddess, but rather a Fungoid Demoness who ruled the 222nd Layer of the Abyss. Potato, pot-ah-to. Killing her is still pretty damn satisfying (if insanely complicated), especially after trudging through the super-dungeon that she helped to create. And really, who among us — male or female — hasn’t had their own fungoid demonesses to vanquish? 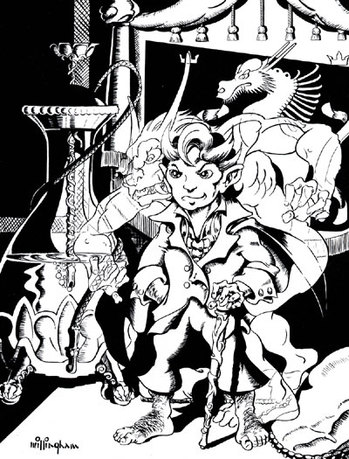 White Plume Mountain has two end-bosses, really. Quesnef is the one you actually get to fight — he’s the Ogre Mage who looks like the Halfling — and the beauty part is that in the grand tradition of static set-pieces, he’s just there to slay. No motivation, no nothing–he’s just been magically forced to stay in that room and guard the treasure until you show up, kick his illusionary ass, and abscond with the Stormbringer-knockoff Blackrazor. Sweet! Keraptis, on the other hand, is apparently far too powerful to confront — he never appears (though at the end, he taunts you and sends a couple of efreet to take you captive), which makes him one of two villains from White Plume Mountain — him, and the undead dragon Dragotha, pictured menacingly in Erol Otus’ map at the beginning — that players wouldn’t get to battle until much later in the ongoing expansion of D&D. 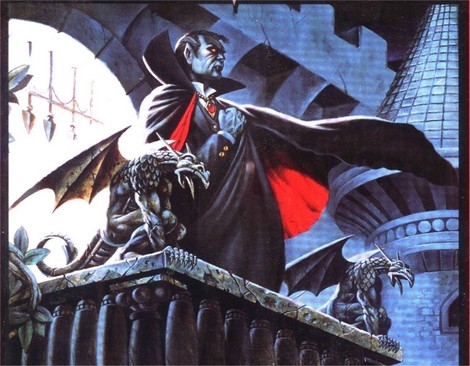 Ravenloft predates Goth culture by a pretty good margin, but it really fits right into the Buffy and Twilight world of vampires in that they’re often doomed but honorable, and always, always romantic. Strahd is one of those villains that you sort of root for, even while he’s threatening your life — or at least your continued status as a PC. But Strahd pulls it off well, despite his weakness for horror-film stereotypes like organ playing and fortune-telling gypsies and tuxes with big capes and red cummerbunds. The best part is that when you finally get to face him down? He’s a powerhouse of a bad guy who doesn’t disappoint by falling easily. 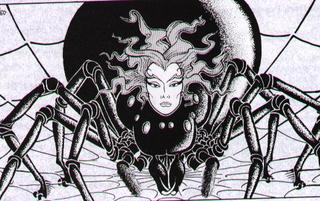 The Queen of the Demonweb Pits herself, Lolth was one of the only divine creatures that the game actually sanctioned killing. Though this would be ret-conned in years to follow, the text in the original module Q-1 is pretty clear: Lolth is the Demon Queen, and a lesser goddess. Players are travelling to her home plane in the Abyss, to confront her on her own turf by boarding her Spider Ship (don’t ask) and kicking some demonic black widow butt. It doesn’t get much more badass than that, boys and girls. And get this — she’s a goddess with only 66 hit points. Hoody-hoo! Smack that bitch up, and let’s roll back to the Prime Material. 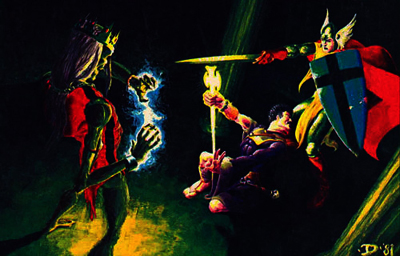 This is the big one: S-1, the Tomb of Horrors. Acererak might not be the most powerful guy on this list (or then again, he might be), but he rises to the top of this list through sheer reputation alone. He’s confrontable — sort of — in the Tomb of Horrors, and damn hard to kill unless you’re very, very lucky (or completely cheating). But his real strength lies in his lair itself–it’s so deadly that its come to be well-known as a slaughterhouse for PCs. Acererak is one of those marks of distinction for characters: did they survive the Tomb of Horrors? Did they face Acererak and live to tell the tale? It’s a boast that few can (honestly, anyway) make.