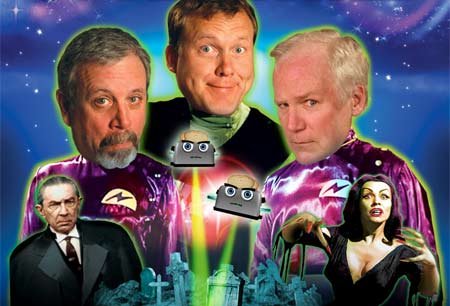 Plan 9? Ah, yes. Plan 9 deals with the resurrection of the dead. Long
distance electrodes shot into the pineal and pituitary gland of the
recently dead. Or alternately, you can just have MST3K‘s Mike Nelson, Kevin Murphy and Bill Corbett broadcast a live-riffing to 433 theaters across America — it’s the same effect, in that it makes me so happy I’ve turned into a drooling moron. Yes, the Rifftrax crew will do a live riff of Plan 9 from Outer Space at 8pm EST on August 20th, broadcast from the Belcourt Theatre in Nashville, Tennessee, and oh my god, I can’t even stand how awesome this is.

Join
Michael J. Nelson, Kevin Murphy (Tom Servo) and Bill Corbett (Crow T.
Robot), now of RiffTrax.com, as they are reunited in HD for the first
time ever on the big screen! This event will feature the world premiere
of a brand new, never-before-seen short and non-stop hilarious riffing
on a COLOR version of “Plan 9 from Outer Space”- a 1959 science
fiction/horror film written, produced and directed by Edward D. Wood
Jr.

This event will be hosted by Veronica
Belmont, the Host of Tekzilla on Revision3 and Qore on the PlayStation
Network, with Musical Guest Jonathan Coulton and a special segment by
Rich “Lowtax” Kyanka of Something Awful.

Everyone Loves Free Stuff…
All event attendees will receive FREE exclusive digital goodies
including a never before seen downloadable short, an autographed
digital photo of the guys and a song by the RiffTones! A URL and code
will be revealed on-screen at the end of the event.

Check out how close it’s playing to you here, as well as buy tickets. I’d also like to add YES FUCK YES YES YES YES and AAARRRRGGHGGGHHHGGHH.