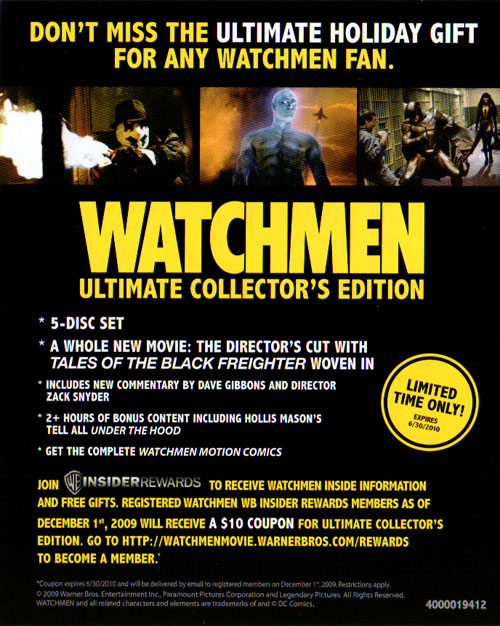 As rumored and promised, there will be a Watchmen Ultimate Edition DVD/Blu-ray set coming out in time for the holidays. While this might be mildly aggravating for some, I’m at least glad this news came out before we all bought the Watchmen Director’s Cut DVD which will be released on July 21st, or we’d all have been screwed (although hilariously, this is actually a flier that goes in the Director’s Cut, which somehow got leaked. Hee-hee!).

So… five discs, huh? Maybe two for the movie, if Black Freighter has been added… one for the motion comic… one for Under the Hood and other extras… and… hmm. What’s that other disc? I hope it’s not a digital copy; I don’t mind digital copies, but it always aggravates me when those are one disc of a “Two-Disc Special Edition!” I bet it is, though. (Via Blu-Ray Blog)