Since Stan Lee and Steve Ditko created Spider-Man in 1962, the character’s amazing powers, endless wise-cracks and relatable vulnerability have rightfully earned him a place in the hearts of true believers everywhere. But with great power comes…endless ancillary spin-offs. Off of the comic pages, Spidey has become a media juggernaut on the big and small screens. His merchandise rakes in billions annually and Spider-Man Day has displaced Christmas to become the most popular holiday of the year! Hyperbole and blatant lies aside, it’s fair to say that the web-head is really awesome. The same isn’t true for all of his non-comic book exploits. It’s a good thing that Spidey Sense doesn’t detect absurdity, otherwise there wouldn’t be the head-scratching (and sometimes toe-tapping) wonders that await on this list. Prepare yourself for the biggest WTF? moments in Spidey’s career that didn’t occur on the printed page.

Remember how Across the Universe awkwardly attempted to make The Beatles marketable to the Hot Topic set? Well Julie Taymor was the director of that cinematic tribute to retarded pretension. She’s also helming the horribly titled Spider-Man: Turn off the Dark musical that features songs from Bono and the Edge. Having a sick obsession with all things that combine wall-crawling and music, I will plunk out money I should be using to pay my rent or date with to check it out when it opens next year. The thing is though, there’s no way it will be as insane or good as the 2002-03 Spider-Man Live! national tour. As the above video illustrates, the show utilized wire-fu, rear projection and stunt work to bring Spidey’s adventures to life. Judging by these clips, I think it’s safe to say that this was a landmark moment in American theater. The only thing that could make this spectacle any more outrageous would be if Spidey fought the T-Rex from the Walking with Dinosaurs stage production. If any of you are event promoters, please make that happen for me.

“Spider-Man, where are you coming from? Spider-Man, nobody knows who you are.” Like cigarette manufacturers, Marvel Comics knew that if they got to kids early they would have customers for life. And so Spider-Man began appearing on The Electric Company in 1974 during the show’s fourth season. Instead of featuring villains from the comic, he faced off against new foes — the most notable of which was an ice-cream stealing Yeti. Turns out that the furry guy was just homesick. After setting police officer Morgan Freeman straight about what the deal with the Abominable one was, our hero sends the creature into a New York City taxi — where he promptly rips the head off of the hack driving. Nice job Spidey.

6) Rock Reflections of a Superhero 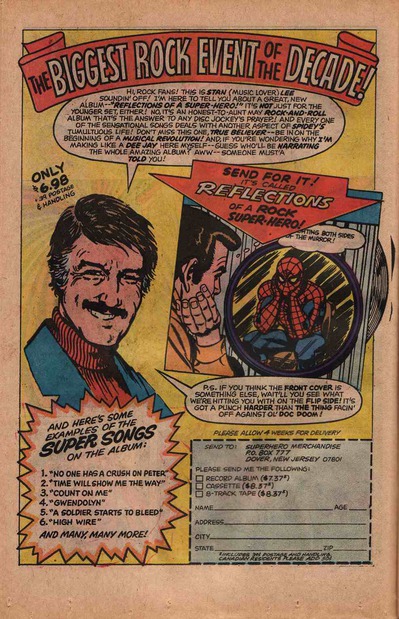 ?
Did Stan Lee secretly want to be Pete Townshend? You’d be forgiven for thinking so after listening to 1975’s Rock Reflections of a Superhero LP. The album’s 22 tracks span the origin of Spider-Man through to the death of Gwen Stacy, with Stan the Man narrating throughout. (Fortunately, he never starts singing). Listeners are treated to a genre-hopping group of songs that vary from Simon and Garfunkel-flavored moodiness (“Peter Stays and Spider-Man Goes”) to bouncy pop (“Spider-Man”). The album’s highlight is “Doctor Octopus, Part 2,” in which a Robert Plant sound-alike calls out the various Marvel heroes and rhymes “Hulk” with “sulk.” Clearly we are talking about the apex of 1970s music here. This wasn’t Spidey’s only vinyl oddity either, in 1966 Tifton released a 45 that featured a song and an adventure, and the 1972 “Rockomic” From Beyond the Grave included music from Ron Dante (of The Archies’ fame) and starred Rene Auberjonois as Peter Parker/Spider-Man. All of these are required listening.

In the 1970s and ’80s when malls were cool and the world still had promise, Spider-Man and various other superheroes would stop by shopping meccas throughout to country to say hello to their young fans. Kids who went to these meet and greets soon learned that Spidey was just some flabby jerk in a cheap suit. The above video is a marketing tool for Marvel’s character appearances, which means that right this very minute some kid is developing a distrust for society because the Hulk they just met at Toys R Us reeks of piss and failure.

In this copyright-infringetastic Turkish movie from 1973, Spider-Man is a murderous counterfeiter spreading his brand of costumed chaos throughout Istanbul. Naturally, Captain America and Mexican wrestling icon Santo are sent to stop him. Translated as Three Mighty Men, 3 Dev Adam is a wreck of a film that would be incomprehensible in any language. Think of it as a low-budget, foreign adaptation of a What If? comic written by a syphillic hobo and you may just enjoy yourself. At least Spidey isn’t friends with a giant robot in it. Speaking of which…

Spider-Man once had a giant robot that he could fly around in and fight huge kaiju with. It’s things like this that restore my faith in the world. You can watch Toei’s infamous 1978 Spider-Man series at Marvel’s official site here, or you can just imagine what wacky bullshit went on in it by reading some of the episode names: “Fearful Hit Tune! Song Dancing Murder Rock” (my personal favorite), “Becoming Splendid: To the Murderous Machine of Transformation,” “Professor Monster’s Ultra Poisoning,” “Farewell War Buddy: Beloved German Shepherd,” “From the Unexplored Amazon: Here Comes the Beautiful Mummified Woman,” and “Super Karate Monkey Death Car.” The last one is a Newsradio reference, but you get the picture.

In 1987, Spider-Man married Mary Jane Watson in a public ceremony at New York City’s Shea Stadium that confused the hell out of the thousands of Mets fans in attendance. After all, what goes better than sports and comics books? Anyway, the event was a shameless publicity stunt to promote the issue of The Amazing Spider-Man Annual in which they wed. Twenty years later, their nuptials were wiped out of existence by the controversial One More Day storyline. Mephisto may be good at changing reality, but clearly the dude doesn’t have the power to get a video yanked from YouTube.

Under the creative direction of Ralph Bakshi (Fritz the Cat) the second and third seasons of the 1960s Spider-Man cartoon became a trippy nightmare in which very little made sense. The most notorious of these episodes was “Revolt in the Fifth Dimension,” in which the webslinger traveled across time and space and fought little fidget creatures. (Repertory film programmers really should pair it with Eraserhead). A plausible urban legend says that the toon was so fucked up that ABC initially refused to air it. Not to diminish its capacity to terrorize or anything, but the episode was really just a recycling of footage from the cartoon series Rocket Robin Hood. For 100% original animated Spidey madness, “Blotto” is where it’s at. While chauffeuring a Zsa Zsa Gabor type around New York, Peter Parker encounters a blob creature called Blotto that was created by a washed-up B-movie actor named Clive. Confused yet? After transforming into Spidey and leaving his new actress pal on a ledge, he attempts to electrocute Blotto to death as the creature devours most of the city and, thanks to recycled animation shots, endless mailboxes. Following a crime spree in which Blotto eats the Brooklyn Bridge (twice), the wallcrawler turns him into paper. Then the episode ends. The subplot about the actress Pete was driving around is never addressed again. Why? Because the writers of this episode were piss drunk. Blotto, if you will.