Photographer, poet, songbird,
Vulcan, TV salesman, Friend of Bigfoot. Leonard Nimoy is all of these things
and more. Working steadily as an actor, director and writer since the early
1950s, Nimoy has proven himself to be a true Hollywood renaissance man over the
years despite never truly being able to emerge from the shadow of Mr. Spock.
His ambivalent feelings over this matter are discussed at length in his memoirs
I Am Not Spock and I Am Spock, both of which should be required
reading for nerds everywhere (Zachary Quinto may want to check them out as
well). As you are doubtlessly aware, Mr. Nimoy recently emerged from a
self-imposed break from the entertainment industry to take high-profile roles
in J.J. Abrams’ Star Trek and Fringe. In honor of Leonard Nimoy’s
welcome return to the public eye, let us pay tribute to his greatest
achievements that didn’t require the donning of rubber ears.

This spot was
originally going to be taken by Leonard Nimoy’s 2007 photography book The
Full Body Project. Packed with artsy photos illustrating the unconventional
beauty of plus-sized women, the tome sadly does not feature robots. Therefore,
it had to go. In its place is this installment of The Outer Limits that
was based on Eando Binder’s short story about an artificial being that learns
about prejudice following the accidental death of his creator. An obvious
influence on Isaac Asimov’s short story collection of the same name, the tale
features themes were also explored in the Star Trek: The Next Generation episode
“The Measure of a Man.” Nimoy’s supporting role here–his second major sci-fi
appearance following a 1961 episode of The Twilight Zone–still draws
raves some 45 years later. When the episode was remade for the 1990s updating
of The Outer Limits, Nimoy appeared as pro-robot attorney Thurman
Cutler. The episode’s director? His son, Adam. Fascinating.

As Spock, Leonard
Nimoy would wrap up each day of shooting by removing his fake ears. As a
tortured genius, Vincent van Gogh cut off the lower part of his left earlobe.
So is it mere coincidence that Nimoy so fascinated by van Gogh? Um, yeah, it
probably is. Nevertheless, Nimoy’s respect for the artist resulted in a
memorable episode of In Search Of… as well as this one-man play about
the correspondence between Vincent van Gogh and his brother Theo that Nimoy
directed and starred in. If you only know van Gogh as the dude who made that
poster with the stars you used to stare at while high in your college dorm, Vincent
is an essential primer to the post-impressionist’s life.

Exclamation point
alert! In the 1973 TV pilot Baffled!, Leonard Nimoy stars as a race car
driver who crashes after he experiences a psychic vision. Teaming up with a
believer in the occult (Susan Hampshire as a proto-Mulder), he is thrust into a
satanic adventure that pushes his otherworldly abilities to their limits. The
above opening credits sequence gives you a taste of the television wonderment
that is Baffled! Admit it; you swooned a little bit when you saw the
Nimoy running in slow-mo. There’s no shame in that. Baffled!

When Orson Welles
went and died before Transformers: the Movie was released, his passing
took attention away from the fact that Leonard Nimoy fucks up all sorts of
Autobot shit as the voice of Galvatron. (Wasn’t Citizen Kane enough PR
for Welles? Attention whore). No disrespect to Frank Welker’s vocal work as
Megatron, but Nimoy portrays Galvatron with a menacing urgency that feels right
at home in a flick that revels in hardcore animated robot death.

6) The Three Men
and a Baby Ghost

As the director of Three
Men and a Baby, Leonard Nimoy is indirectly responsible for the classic
urban legend that the film features the ghost of a child who committed suicide.
It’s a great story for sure, but it doesn’t have a shred of truth to it. In the
heady days before you could debunk misinformation various blowhards in your
life spewed out by heading over to Snopes.com, this bit of bullshit spread like
wildfire. The above video meticulously analyzes the legend in more detail that
you would ever possibly want or need, but suffice to say people are stupid and
cardboard stand-ups of Ted Danson exist solely to fuck with you.

Gamers who yearned
to spend hours raising a sarcastic fishy thing got their wish when Seaman was
released for the Sega Dreamcast in 1999. The virtual pet title gave players the
opportunity to oversee the complete life cycle of a carp/human hybrid that was
more than just a little reminiscent of the talking fish from Monty Python’s
The Meaning of Life. Designed to be played for only minutes a day, the game
frustrated those expecting Tamagotchi-style instant gratification. Things got
even stranger once the Seaman began acting like an amateur psychologist and
bombarding players with personal questions that they were forced to answer via
the game’s included microphone. If you survived the shame of discussing your
relationship (or lack thereof) with Seaman and then managed to avoid
accidentally killing him, he would reach his final stage of evolution and beg
you to release him into the wild. At the start of every Seaman session,
the voice of narrator Leonard Nimoy would update you on your creature’s status.
Sometimes when I close my eyes I can still hear him telling me that “Gillman is
dead” without a hint of emotion. Damn you Nimoy, have you no compassion?

3) The Ballad of
Bilbo Baggins

William “Rocketman”
Shatner isn’t the only Star Trek cast member with musical skeletons in
his closet. This tribute to “the bravest little Hobbit of them all” originally
appeared on the Two Sides of Leonard Nimoy LP. As this song proves, one
of those sides is clearly fucking insane. Nevertheless, the tune’s Reese’s
Peanut Butter Cup-style fusion of Trek appeal with Tolkien worship made “The
Ballad of Bilbo Baggins” a defining moment in nerd rock.

2) The Simpsons’ “Marge vs. the
Monorail” 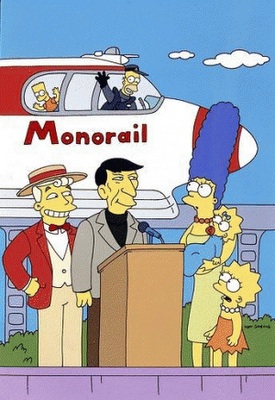 The Simpsons has been on the air now for what, 40 years?
Airing in the fourth season, Marge vs. the Monorail is arguably the
series’ finest moment. Written by Conan O’Brien, the episode features conman
Lyle Lanley (voiced by Phil Hartman) convincing the residents of Springfield
that a city-wide Monorail system is the answer to their woes. From the song and
dance interlude straight out of The Music Man to an opossum named Bitey,
the laughs are unrelenting. In a bit of cartoon kismet, Nimoy’s
self-deprecating cameo occurred only after transit advocate George Takei
decided not to participate in the episode. The cosmic ballet goes on…

The world is full of
mysterious shit, and there’s no one better to help sort it all out than Leonard
Nimoy. From 1976 to 1982, he brought Bigfoot, Nessie, the Bermuda Triangle and
poltergeists aplenty into living rooms across the country. No matter how
ridiculous the topic at hand was (psychic plants anyone?), he treated each
subject with reverence.  Almost 30
years after the show left the airwaves, the majority of questions raised by the
show remain unanswered. Not that it matters. Besides, what fun would living in
a world without the possibility of Sasquatches be?