The greatest action figures of the 1980s never really went away. G.I. Joe, Transformers and Masters of the Universe have persisted in some form in the toy aisles during the last 25 years. Even Voltron continues to get new toys on occasion, but there is one big ’80s toy-based property that has yet to get its due — Thundercats.

Thundercats was perhaps not quite popular enough to be among the upper pantheon of 1980s action figures, but it was certainly close and is fondly remembered today by 30+-year-olds. Sure, Thundercats lives on in the kind of nostalgia-based t-shirts and bumper stickers that one would find at Hot Topic, while a CGI movie is reported to be in development. But given the amount of relaunched ’80s toys in ’00s-era toy stores, it’s insane that there have not been new Thundercats figures in stores! It’s hard to believe that no toy company has obtained the rights to produce more Thundercats toys, be they reissues of the originals or, better yet, new figures of the characters made to today’s higher standards. Mattel’s Masters of the Universe Classics series has proven that a direct-to-collector toyline with smaller runs can be successful. Let’s hope that happens for Thundercats, or that perhaps we’ll get an excellent wide-release toyline when and if the new film happens. Until then, here are the 12 best Thundercats figures from the original LJN series. 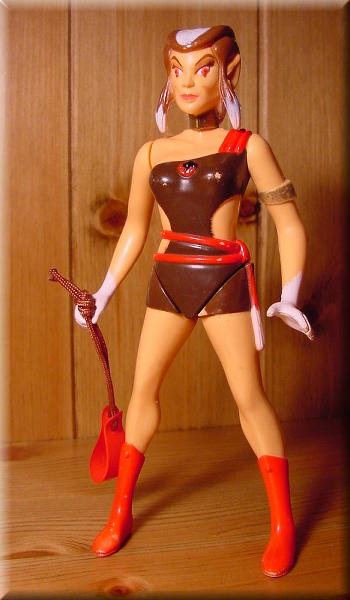 Cross “Love is a Battlefield”-era Pat Benatar with a puma and an Indian mystic and you’d have Pumyra. This talented healer who had impressive leaping ability was one of the later ThunderCats discovered on Third Earth. She’s a cool figure, although she was somewhat rare to begin with and can now be a real bitch to find. Many examples of the toy have developed plastic discoloration, too. 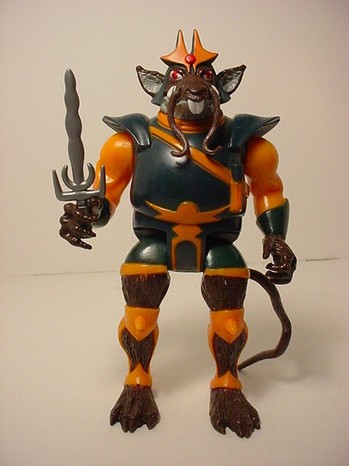 Kind of the Genghis Khan of the Mutants, Ratar-O is a fat rat wearing samurai-like space armor and wielding two mystical daggers. He would have fit in well with the Ninja Turtles! 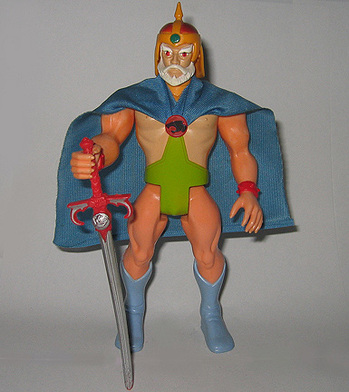 Jaga was Lion-O’s predecessor who didn’t survive the long trip to Third Earth but showed up as a specter to dispel wisdom, anyway. His action figure perfect captured his regal status, and he came with the Sword of Omens (which he used to wield) and a spiffy blue cape. Strangely, there were two similar but distinct versions of the figure released around the same time. 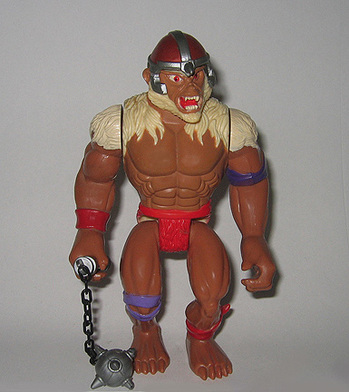 Monkian may not have been the bravest or the brainiest Mutant, but it didn’t matter since he was an albino ape wearing a helmet and wielding a morning star on a chain! Monkeys are awesome. 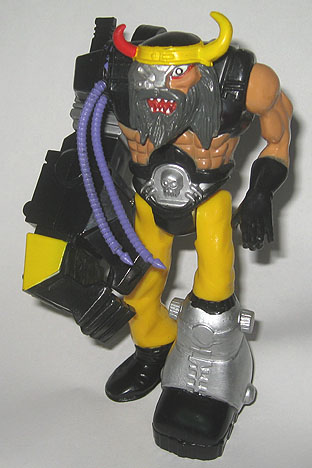 Hammerhand was the robo-viking who led the troublesome Berserkers. And he had one of the coolest action features ever — a HUGE robot hand which kids could operate to pick up ThunderCats and shake ’em around until their hairballs popped out! 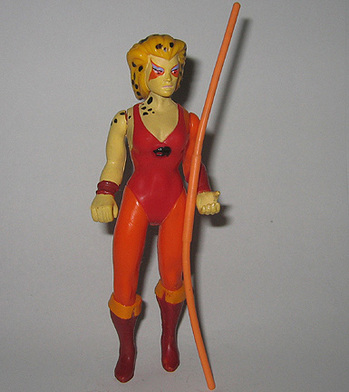 Cheetara, the sexy female Thundercat (although much more sexier in the cartoon than in action figure form), caused many of us to entertain our first mental arguments on the ethics of bestiality. She came with Battle-Matic action to swing around her staff, and some versions of her came with a PVC WilyKit to match the WilyKat that came with Tygra. 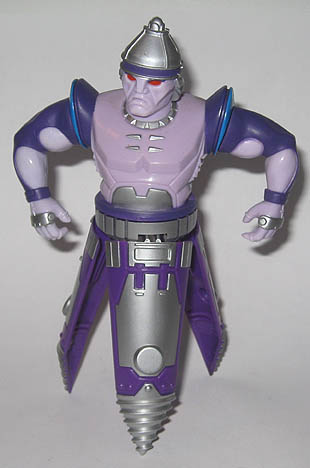 It’s hard not to love a purple robo-drill-man who insists on using a “The” in front of his name. “The” Driller was a member of the Ram-Pagers and had the swell action feature of spinning around like a madman, knocking all of your other action figures off the table. 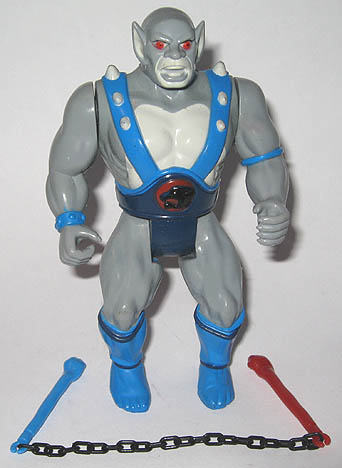 Without a doubt, the coolest of the Thundercats. His coolness was enough to forgive that his toy was posed in a weird squat in order to sit in his ride, the ThunderTank, and that he was sculpted with an O-face. Panthro came with an awesome pair of cat’s paw nunchucks, which he swung around when you pushed down the lever on his back. 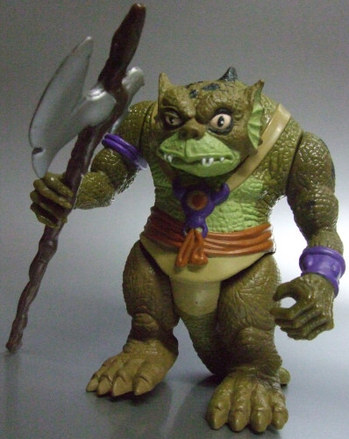 S-S-Slithe was the “Moe” to the Mutant Three Stooges that consisted of him, Monkian and Jackalman, the group that constantly made themselves a pain in the tail to the Thundercats on Mumm-Ra’s orders (Vultureman would be Shemp, I suppose.). A brutish, hulking lizard-man, S-S-Slithe swung around his battle axe when you pressed the lever on his back. His toy was an excellent sculpt, even by today’s standards, that beautifully detailed his animated features. 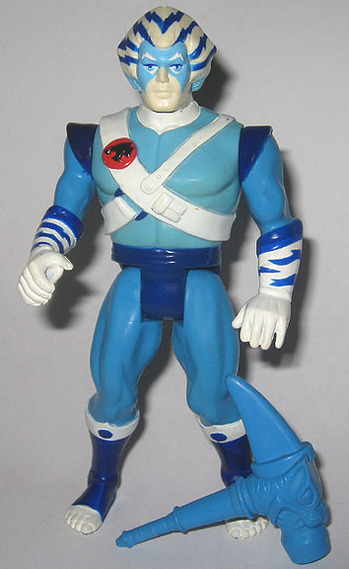 Readers, you may now unfurl your nerd rage in the comments because, yes, I’ve included Bengali on this list instead of his more famous mold-brother, Tygra. Bengali simply had the better color scheme, featuring icy blues and white, and was one of the most striking and popular figures in the whole toyline. Sadly, Bengali was a late release and was produced in fewer numbers, making him fairly rare these days. If Tygra ever gets a new toy, hopefully a Bengali repaint will soon follow. Bengali included a giant f’ing axe instead of Tygra’s bolo whip. 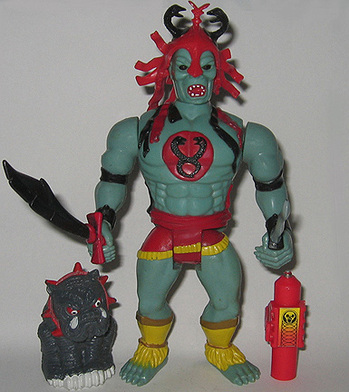 The mail-away figure of the decrepit mummy version of Mumm-Ra was no doubt a must-have. But the most fun version of Mumm-Ra was the toy that represented his much more threatening and muscular “Ever-Living!” form. Like his nemesis Lion-O, Mumm-Ra came with a power ring that lit up his eyes and Battle-Matic action. Also included was a sword, a dagger and his stylish red headdress. And if you were REALLY lucky, you got a Mumm-Ra that came with his pet bulldog, Ma-Mutt! 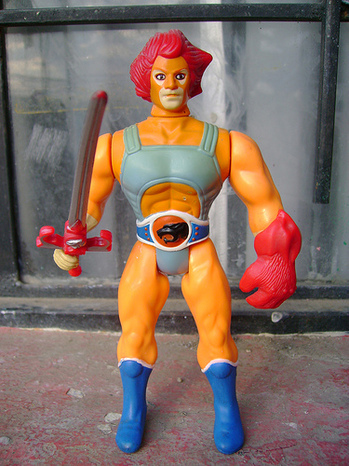 The Lord of the Thundercats is the most iconic figure, but also had some of the coolest accessories and features. He sported Battle-Matic action, allowing him to swing the Sword of Omens. The included power ring connected with Lion-O’s back, enabling his eyes to light up as he implemented his “Sight Beyond Sight.” Some versions of Lion-O came with a PVC Snarf, proving that LJN knew how to give a toy some nifty accessories. You could even choose between Lion-O figures with different shades of hair. And then there was the badass claw shield; Ah, how many of us as kids donned our Nintendo Power Glove and pretended we were the great Lion-O?! Or was that just me?