Summer is a time for many wonderful activities, most of which involve pretending it’s any season other than summer. As sure as sunshine, unpleasant heat merits the pursuit of cooling oneself with efficiency and, if possible, fun. That’s where swimming pools come in. But cool water isn’t really enough, is it? Most folks demand more of pools than simple refreshment and plastic pool toys respond in kind, delivering the best in floating, squirting and swim-inspiring technology. But that’s not all; many pool toys bear the marks of nerdom’s greatest licenses, providing boys and girls a blessed incentive to prevent personal heat stroke. Continue reading to discover why, when it’s time for fun in the sun, it’s best to beat the heat with these nine nerdy peripherals.

When there’s something weird and it don’t look good in a pool, it’s usually means a swimmer couldn’t control their digestive system the way science intended. There are many methods by which to “bust” an uninvited specter of sorts, but the most hilarious probably comes care of the Ghostbusters Water Zapper. This spectral squirt gun was impossibly pump-activated, meaning it took two or more grimacing adults to get it to display even an ounce of pressure, making it the perfect placebo for GB fans stoked for summer fun. It’s not really made for cleaning waste out of pools, but with some imagination and the GB trap, young ‘busters could probably have found a wonderfully regrettable way to make it happen.

Dive sticks are weird. On one hand, they give novice underwater explorers a means to set their own diving goals. On the other, they practically dare ambitious kids to cheat death in the name of fluorescent-hued plastic rods. All danger aside, it’s easy to see why nerds might prefer superhero-flavored dive sticks. It’s just a better payoff for nearly drowning. It may seem a bit morbid to carelessly submerge DC’s heavy-hitters, but from a practical standpoint, it’s decent motivation to help save the day. Of course, if Aquaman had been packaged as part of the set, kids would just leave him at the bottom of the pool. Not because they’d understand he can breathe underwater, but because they intuitively hate him. 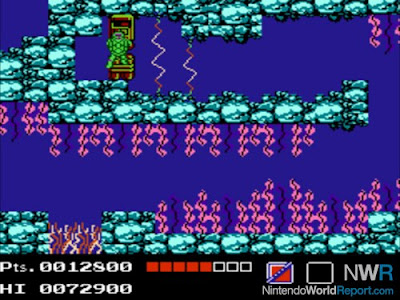 Even though the Teenage Mutant Ninja Turtles rarely seemed to visit public pools, true fans understand that between living in a sewer and…being turtles, the green machines had mad wading skills. With these turtle flippers and ninja mask goggles, kids can take to water like true heroes in a half shell. Luckily for the youngsters using them now, they’ll never have to know the pain that was the dam level in the TMNT NES game. An entire generation has been conditioned to stay away from electric pink seaweed, which is actually full of vitamin K.

Remember when Spider-Man’s clone was Spider-Man and he invented all kinds of neat gadgets to augment that old fogey Peter Parker’s classic web-shooters? One of his finest gimmicks was “impact webbing,” which was essentially just regular webbing in ball form. These “splash balls” are kind of like that, only instead of exploding into a gooey mess on impact, they just hurt because they’re effectively sponges full of water. In other words, they are perfect for harming siblings on hot summer days.

Finally, a practical solution for toddlers into cosplay AND swimming! This one-piece swimsuit incorporates fine Kryptonian (or Martha Kent-ian) design with an important drying modification – a terrycloth cape. It’s probably a horrible idea to wear the cape in the pool, given it’s capacity for dampness, but since kids don’t like things that make sense, non-awful parents will think to save the removable accessory for the 100-degree car ride home from the pool. Remember mom and dad, hot leather interior is a wet child’s Kryptonite.

What sounds like a complete no-brainer is actually a pretty scarce item. Relegated to promotional item status by the man behind the Pok?mon licensing curtain, only the lucky few have scored an inflatable version of Pikachu’s spherical prison. While it’s probably a blast at picnics or on a sandy surface, nothing beats the excitement of rattling a monster’s cage by splish-splashing and beach ball bashing in an above-ground pool. Just be careful — water is weak against electricity. 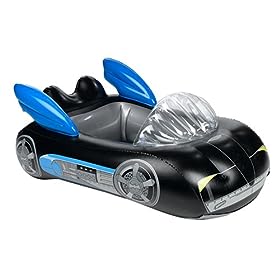 Batman may seem to have a monopoly on this list, but it’s only because his awesome billionaire playboy lifestyle translates well into pool playthings. Seriously, if someone wants to swim in an inflatable car, why not use the coolest car in the DC Universe (if not, the entire universe)? Though it hardly seems to translate any of the actual Batmobile’s key features into inflataform, the floating crime fighting vehicle looks cooler than a standard inner tube, even if chicks won’t likely dig this car if the “driver” is older than six.

The most (possibly only) useful droid in Star Wars lore, R2’s awesomeness culminated aboard Jabba the Hutt’s sail barge in Return of the Jedi. Yes, shooting Luke his lightsaber and tasing the crap out of Salacious Crumb were both very kind of the astromech, but more importantly, Artoo served galactic booze to scummy alien dudes. Starting in 2010, society can finally benefit from George Lucas’ boundless imagination with a low-tech and cost-effect alternative to light and magic of the industrial variety. Just add air to this fantastic floatable for icy, droid-served beverages on any body of water. The best part? Zero “bloop-bloop” lip from a snarky droid. 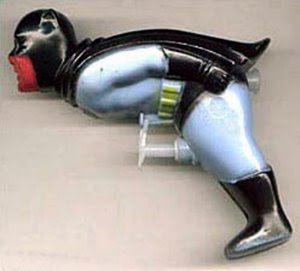 Of all the water-squirting curiosities at a child’s disposal, this wholesome novelty is probably the best. It’s highly suggestive and coated in ironic overtones, yet somehow aesthetically ingenious. After all, if dudes didn’t have y’know, anatomy of any kind, the blatant reversal of which body parts perform what functions would simply frame elegant design features. A trigger here, a spout there, no harm done. Also, if Batman weren’t a mental patient taking unholy vengeance upon the kind of scum that murdered his parents, fanciful aqua pranks wouldn’t seem beneath his mythos. Not one bit. With all this in mind, it’s time to celebrate the life of Bruce Wayne by hoping Dick Grayson fares just as successful in strange water toy merchandising.