?
That’s concept art from Tony Pulham for an upcoming Wii game currently codenamed “Epic Mickey,” which seems to be a dark, steampunk version of the Disney universe. Don’t believe me? Check out Goofy: 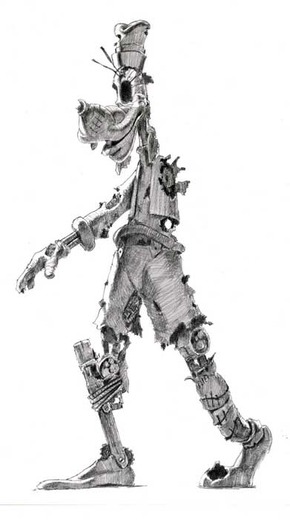 ?
That shit rocks my world. It looks like Disney has finally paid attention to the success of Kingdom Hearts, and realized that adults do not mind twisted takes on their beloved characters. Hell, I’m not much of a Disney fan (especially not Mickey) but I would play the holy fuck out of this game. Please head over here to see much more awesome concept art and details regarding the game. Thanks to whoever sent the tip in; I seem to have lost the email while drooling of zombie robot Goofy.