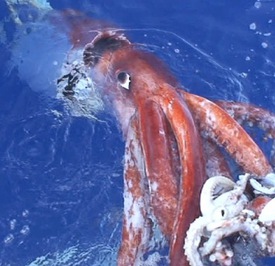 Hogwarts sighed and it
echoed within his empty halls. The students had all left for the
summer and he felt empty and useless. Hagrid was often around, but
he was usually too focused on bizarre animals to fulfill the needs of
Hogwarts. Professors would pop in occasionally, but being a magic
school, Hogwarts didn’t need much upkeeping. The little he did
need was taken care of by Filch. …

The giant squid saw how
miserable Hogwarts was. It was true that he also missed the
students, but for an entirely different reason; he missed their
terrified screams as he revealed himself, rising from the murky
depths of the lake.

His huge eyes stared
mournfully at his very large tentacles. At one time, he had dreams
of being an actor. The larger he grew, the fewer agents and scouts
would come calling, until they finally stopped altogether. There
wasn’t much in the market for a squid that would split a schoolgirl
from stem to stern.

He stared at his
tentacles as they moved gently in the current. Schoolgirls were out…
A plan formed in his mind and he swam to the surface, hesitating
momentarily before pulling himself from the water. It ran off of his
rubbery skin in rivulets as he made his way across the grounds. No
humans were around to witness the incredible trek and no human would
believe his eyes had he been a witness.

Hogwarts watched the
giant squid approach and felt apprehension well up in his kitchen.
“What are you doing?” The words weren’t spoken, but they were
understood.

I am so confused and hurt and bewildered by the insanity of all of this that I can’t even make a joke. Hit to jump to read about a squid fucking a castle.

What possesses someone to write about architectural bestiality? I can’t even imagine.

“I’m not ready!”
Hogwarts exclaimed, trying to push the giant squid away with his
magic.

“Hogwarts, you’re
lonely, I’m lonely. We don’t have to be. Besides, you can’t
go around manipulating your staircases.”

“You know about
that!”

“Everyone does it.
Sort of.”

“That’s beside the
point. I’ve never…” The temperature within rose in
embarrassment.

“I’ll go slow. I
promise.” He began to caress a window, teasing it open. Hogwarts
sighed, the fight leaving him. He relaxed, allowing the tentacle
inside, where it brushed against the inner walls before settling on
the stone floor. He fastened the suction cups to the floor, lifting
the tentacle away so that it pulled on the floor without losing its
grip.

“I’ll go slow” SAID THE GIANT SQUID TO THE BUILDING

Another sigh swept
through the halls of Hogwarts. “Oh, Merlin. That feels so good.”
His rapture turned to fright as he felt a tentacle work its way into
a second window. “I don’t–“

“Trust me. It’ll
feel good. Remember this?” He pulled the suction cups a little
harder and Hogwarts groaned.

“Do that again.”
The giant squid complied and as he did so, thrust his second tentacle
in. Hogwarts shuddered, coming very close to ending the fun. The
giant squid backed off, unwilling to finish so soon. He waited for
Hogwarts to calm down before sending the second tentacle to search
the room. He felt the need to fill Hogwarts as much as possible and
he raised another tentacle, caressing his outer walls, running along
windowsills and tracing individual bricks. So caught up in the
bliss, Hogwarts didn’t notice the giant squid slip in a third and
fourth tentacle.

“This is incredible,”
Hogwarts breathed.

“This isn’t even
the best part.” He held up his two longest tentacles. “These
can reach farther than a room; they can go into your hallways.”

What in fuck does “hallways” even signify? I don’t even know which orifices the windows are supposed to be, AND GODDAMN THIS STORY FOR MAKING ME THINK ABOUT THIS

“Are you sure?
They’re quite large.”

Apprehension rolled
through his kitchen again. While he was deciding, the giant squid
forced another tentacle in. “You have three tentacles left to
decide.”

In response, the giant
squid slid a sixth into another window. “Two,” he said simply
and with a hint of warning.

Hogwarts could take
them all, he knew he could. But what would the other wizarding
schools think? Would Beauxbatons allow a giant squid to violate her?
Certainly not! If Durmstrang ever found out, there’d be no end of
teasing.

The giant squid grew
impatient and slid a seventh tentacle into a window, followed
immediately by an eighth. “Two. One. Time’s up and you didn’t
decide.”

“It’s a simple
answer: yes or no. Now I’ll have to punish you.” And with
that, he struck Hogwarts square on the outer wall with a paddle-like
tentacle. Hogwarts yelped and tried to squirm away, but the
tentacles and his foundation held firm. The giant squid struck him
with the other. Again and again he spanked the naughty wizarding
school until he sobbed for the giant squid to stop. And still he
spanked.

Am I tripping? Has someone really written this down, or is this just some elaborate, horrible nightmare?

The giant squid finally
stopped, but Hogwarts didn’t have time for a reprieve before the
giant squid forced his extra long, spanking tentacles into two
separate windows. They slid through the room and forced the doors
open, the pain only adding to Hogwarts’ pleasure. The tentacles
were in the halls now, massaging the long, stone tunnels.

This was incredible,
the giant squid thought. He really should have done this ages
ago. Every tentacle was in a different window. No schoolgirl, no
matter how many movies she made, could hold all ten tentacles at
once. Each one moved differently and with a different pace, driving
Hogwarts crazy with the inability to match his speed.

He felt that familiar
feeling and doubled his efforts. Ink exploded all over Hogwarts,
some finding its way into the windows. He unified his tentacles
somewhat, completely focused on Hogwarts. He must be close.

Then it happened:
water shot out of faucets, toilets overflowed and bread set in ovens
to keep warm by thoughtful house-elves exploded. Hogwarts shook
violently to his foundations, rousing Filch from bed and sending
house-elves and Mrs Norris scrambling for cover. Even Hagrid heard
the groan of stone and came running.

The building has orgasmed. Specifically, a giant squid has brought Hogwarts to orgasm. And thus we have discovered there is no loving god in this universe.

They searched around
the castle and through the castle, but found no sign of intruders.
Most perplexing was the sticky ink on one side of the castle. Hagrid
peered through the dark toward the lake, but was unable to see the
ripples left in the wake of the giant squid.

The giant squid slipped
beneath the waves, wanting to grin even though his beak was
incapable. He anticipated a very short summer before the professors
and students returned, so he had better make the most of it.