I have to admit I’m particularly delighted by today’s Fan Fiction Friday. Not only did I not personally find it — a wonderful TR reader named Christian sent it to me, shortly before he tore out his eyes and was cursed to wander the Earth, prophesying like blind Tiresias — but I’m a big fan of the Soul Calibur games. Now, I know not everyone is as familiar with Soul Calibur as most of the cartoon fan-fics I normally post, so here’s your quick primer for the FF.

?
Ivy wields a sword/whip thing, and is looking for the ancient, magical called the Soul Blade (like pretty much everyone in Soul Calibur). She’s the daughter of the undead pirate Cervantes, and although she started out evil in the series, she has really large breasts and now I think she’s an anti-hero. 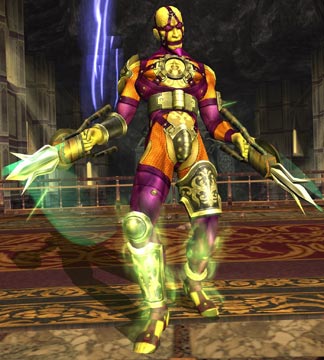 ?
Voldo is a blind, mute Italian gimp whose also searching for Soul Calibur for his dead master. His moves in the game are inspeakably perverted, mostly involving slithering around his opponents’ bodies and humping them while he attacks with his claw things. When he wins, one of his victory poses is thrusting his crotch into the air.

And I think that’s all you need to know, other than the story begins right as Ivy receives Soul Blade. The soul still burns after the jump!

Ivy had finally obtained Soul Edge and was feeling great. He task was
done and best yet her father had left to hell to rot forever. She was
leaving the monastery when she heard a rustling sound. She spun around
looking about for intruders. “Whose there?” she called out but there
was no reply just a very rapid tapping sound.

She knew something was there but she decided it best to just keep
walking and not seem worried. Just as she was about to descend down the
stairs she felt a pain in her back as something collided with her
causing her to fall down the stone stairs. He head hit the landing and
she blacked out but not before hearing the tapping sound.

She woke up on the cold floor of large empty room. The room was
circular shaped with now apparent openings and not much lighting. The
tapping sound was heard. “Where am I?” she asked. Again Ivy was met
with no reply. She looked for her weapon but saw it was gone. She
watched in horror as a shadow came across her from behind. A hissing
noise was heard and Ivy screamed “Voldo!”

Voldo hissed loudly and tapped one of his claws against the metal
strap for her revealing top. In an instant he cut through the metal and
let Ivy’s breasts hang loose. Ivy stood still petrified, what was she
going to do? Ivy hissed again and then ripped off her thong. Voldo then
rubbed his hand and claws on Ivy’s left breast one of the claws managed
to scrape the upper part of Ivy’s breast.

Ivy having the effect of flight or fight turned around and punched
Voldo in the stomach. Voldo grabbed her violently causing a couple of
cuts on Ivy’s back. “No! Let me go!” screamed Ivy and she kicked and
pounded at him she began to rip off some of Voldo’s cloth. However this
only seemed to excite Voldo more as Ivy could tell by the erection she
felt on her stomach.

I wouldn’t try to think too hard about exactly how they’re positioned here. Unfortunately, the character of Voldo could probably manage whatever contortions are necessary to pull this off.

Voldo then used on set of claws to tear off the part of cloth
incasing his penis. Ivy swore she saw him grin. Voldo began to grope
her breasts roughly, Ivy moaned and winched as the claws scratched her
stomach and chest. Voldo then inserted his cock into Ivy’s womanhood
she screamed in pain at the size. Then more pain came as the erection
started to push up into her body. “Voldo you have to stop you’re
killing me!” begged Ivy.

For the record, Voldo having a montrously large penis is not in his offical Bandai Namco character bio. That I know of.

Voldo did not reply he grabbed Ivy’s butt for support and lifted
her in the air while he humped her. He began to knead Ivy’s sweaty butt
as she screamed for mercy. All Ivy wanted was for Voldo to climax and
get the whole ordeal over with. Voldo did cum but while he did his
powerful shot managed to press against Ivy’s organ and Ivy could feel
her body being destroyed from the inside. With one final breath she
screamed as her eyeballs popped out leaking of Voldo’s seed. Ivy’s
lifeless body feel to the ground and Voldo tapped away.

I’m sorry, did you miss that?

With one final breath she
screamed as her eyeballs popped out leaking of Voldo’s seed.

With one final breath she
screamed as her eyeballs popped out leaking of Voldo’s seed.

I know this might be horrible to even the most jaded FFF readers, so I created this picture in hopes of softening the blow. 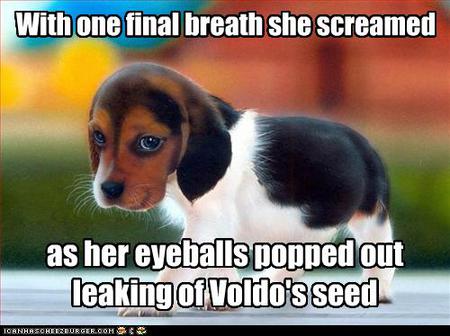 ?
Now when you think of eyeballs rocking from someone’s skull, trailing sperm behind them, you’ll also think of this adorable puppy! And vice versa, I suppose. Oh well. I tried. Back to the story!

However Ivy’s ordeal was not over with death. Her body was now
fully intact again in the after life. Ivy awoke in the fiery pits of
hell with a grinning Cervantes looking down at her. “Welcome to Hell my
daughter!” roared Cervantes. “No! Get away from me!” yelled Ivy as she
began to run but she tripped and fell down. Cervantes slowly walked
over to her. Then he did something she didn’t expect he peed right in
her eye! Ivy screamed and held her eye, the urine burned.

If you immediately stopped and wondered why the author didn’t just have Cervantes pee in his daughter’s empty eye sockets, congratulations — Fan Fiction Friday has officially ruined your life.

Cervantes laughed and grabbed Ivy by the head he lifted her entire
body about three feet in the air and then spit in her face. “Stop this
father!” pleaded Ivy what she had just been through had lowered her to
begging. Cervantes cocked back his head and laughed. “Ivy, when I
raised I always hoped you’d grow up to be a beautiful woman so I could
invite guests to dinner parties and you could service them and then
service me. However in Hell I have no guests so you’ll get to service
me all dong long for eternity!” laughed Cervantes as he used one of his
hands to knead her breasts. He squished her breasts together and
pinched her nipples. “You can’t do this!” snapped Ivy still twitching
her eye from the urine.

Also not in the official Bandai Namco bio, for the record.

“What are you going to do kill me?” asked Cervantes mockingly. Ivy
growled and managed to slap Cervantes. “Oh, a fighter. I like that.
You’ll be a good mother for our kids.” Ivy’s eyes grew wide at this,
what did he mean? “You see since we can’t have guests we might as well
have kids, kids that will grow up to rape their own mother. It’s always
been a dark dream of mine!” explained Cervantes. “No, please don’t!”
cried Ivy her salty tears mixing with Cervantes’s piss.

“I also want to write about an aged Spanish gentleman who’s convinced he’s a medieval knight! And he’ll ride a donkey and have a wisecracking sidekick! And then Terry Gilliam will keep trying to make movies based on it but fail! But mostly I want to father a lot of children with my daughter who I will then train to rape their mother in hell.”

Cervantes did not listen to her daughter’s pleas. Instead he
raised an arm high and used his foot to pin Ivy down. “Let the breeding
begin!” he announced. Ivy screamed as Cervantes prepared to inject his
seed into Ivy.

We can only hope! Author Elklodge is looking for more ideas for this epic; apparently he’s suffering a bit of writer’s block after the eyeballs thing. I honestly don’t blame him. Once someone fucks somebody so hard their eyes shoot out… where can you really go from there?