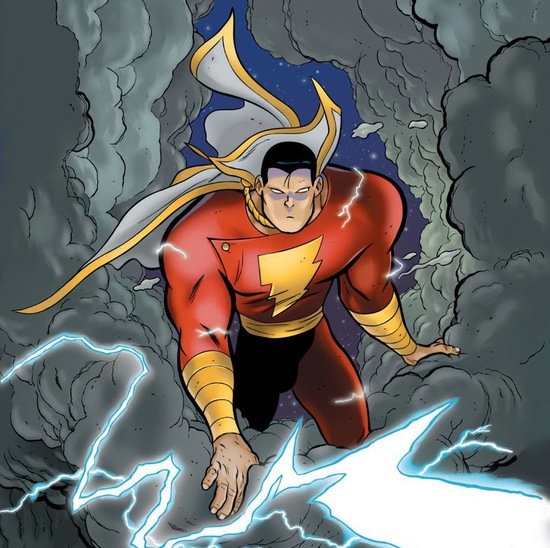 ?
I know I’m a day late on this, but bear with me. From the Hollywood Reporter:

Geoff Johns, one of the three DC Comics heavyweights hired by the
studio to act as consultants on DC projects, is also helping with
the kick-start, co-writing the story with [Bill] Birch.

It’s somewhat fitting that Birch takes on “Shazam!” as his very
name echoes the name of the comic’s hero, Billy Batson, a teenager
who becomes Captain Marvel when he utters the magic word “Shazam!”
The name is an acronym for six gods and heroes of the ancient world
as well as their attributes: the wisdom of Solomon, the strength of
Hercules, the stamina of Aries, the power of Zeus, the courage of
Achilles and the speed of Mercury.

The project, which was housed at New Line for several years, has
had a tough time taking flight, with writers William Goldman, Bryan
Goluboff, Joel Cohen and Alec Sokolow, as well as John August
taking turns writing a script.

Not. Gonna. Happen. Sorry. But I just don’t see a Shazam movie getting made. There’s a reason it’s had a tough time “taking flight” in Hollywood, and that’s the same reason DC has a tough time producing a Shazam comic — the whole premise is about a boy who can turn into an adult superhero, which makes it intrinsically a property for kids. As we all know, only jaded adult nerd read comics nowadays, and all Hollywood wants is superhero flicks for the PG-13 set like Iron Man and The Dark Knight. You can’t have that grittiness when the main character goes to elementary school.

Now, I’m sure Johns will turn out a good script. But unless Warner Bros. bites the bullet and just accept Shazam as a G or PG property, it’s either not going to happen, or it’ll flop. End of story. Although again, I feel its insane that Warner Bros./DC thinks it’s a better option to make a Shazam movie instead of Wonder Woman or even another, decent Superman flick. There is something seriously messed up about their priorities.