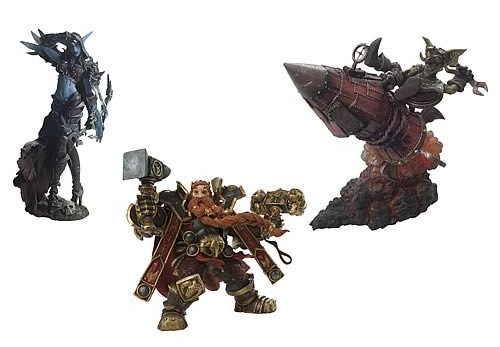 ?
DC Direct is only releasing three World of Warcraft figures for series 6 of the toyline, which only means one thing — they’re tired of making money. Seriously, these things are worth their weight in gold — real gold, even — the way the jillions of WoW fans scramble after them each time they get released. Let’s see, this set includes (left to right) Forsaken Queen Sylvanas Windrunner, Dwarven King Magni Bronzebeard and overcompensating Goblin Tinker Gibzz Sparklighter, the last of which I’m sure is a rejected Star Wars character name. Still, I imagine the biggest misnomer is that ol’ Sylvanas won’t be forsaken for very long, the way sexy elf girl toys seem to go. You can pre-order the trio, due next April, over at Entertainment Earth.

Oh, I should probably mention that even if you’re not into WoW figures, EE is having a massive sale on nearly 1000 items, including a lot of the G.I. Joe 25th anniversary figures and vehicles, a lot of Star Wars figures and vehicles (including that awesome and huge Millennium Falcon), Transformers Universe, and more. If you’ve got money saved up from the summer, there are worse places to blow it, I guarantee.