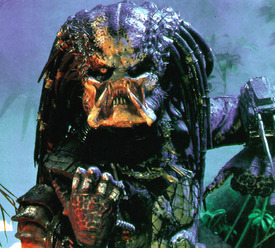 ?
The news that the unnecessary Predator sequel — currently titled Predators — will be filming in Hawaii is making the rounds today, and it’s exactly the kind of news I don’t give a shit about. The only rerason I mention it is because Fangoria slipped this tidbit about the movie, which you all probably knew and I didn’t:

This
new tale, dubbed PREDATORS is set on the creature’s homeworld, where a
group of humans find themselves stranded and hunted.

Really? It’s set on the Predators’ home world? Okay, color me intrigued. I would actually be interested in seeing where the Predators come from, especially what happens to a bunch of idiots who accidentally land there. But there better be a goddamn good reason this movie doesn’t end in three minutes — which is to say why a planet full of Predators can’t take out these humans — and I’m talking story-wise, of there will be hell to pay, Predators movie. By which I mean there will be a lot of whining on the internet.