Ah, flight. Where would we be without it? Nothing says “we’re off to adventure!” like a hero rocketing off into the sky, leaving the world he knew behind. Sure, there are those famous few blessed with the power of flight, Superman, Storm and so on. Good for them. We’re talking about flight-enablers here, not those spoiled with the ability to begin with, and we’re not taking about spaceships either. The reason flying vehicles are so important isn’t just because they look awesome and do cool things though — no, these (mostly) winged transports also tell us something about those who pilot them, often times acting as a symbolic reflection of their owners’ psyches. And no, the back of Robert Pattinson didn’t make the cut. Which flying apparatuses did? You better hold on tight, spider monkey. 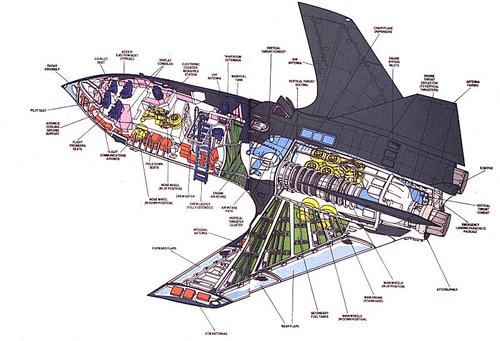 ?
Originally inspired by the Lockheed SR-71, the Blackbird, sometimes called the X-Jet, has been with the X-Men through thick and thin, making appearances in their movies, TV shows, and video games, and, like most comic book vehicles, being destroyed, rebuilt and upgraded on various occasions. While designed more for stealth than heavy combat, the Blackbird does include concussion missiles among its weapon repertoire and was ultimately modified to include technological advancements from both Forge and the Shi’ar. Other features include Vertical Take-Off and Landing (V.T.O.L), enough cargo room to hold ATVs and an escape pod designed to fit inside the whole cockpit. No word yet on iPhone compatibility.

Before Willy Wonka reveals to Charlie that he will be the one to inherit his famous chocolate factory, in 1971’s Willy Wonka & the Chocolate Factory, Willy decides to take Charlie and his Grandpa Joe for a ride in what he terms “The Great Glass Wonkavator,” which is different from a regular elevator because it can go “sideways and slantways and longways and backways and squareways and frontways and any other ways that you can think of.” Not only that, but it seems to be propelled by some combination of psychic power and magic, since all it takes to set it in motion and guide it is the press of a big red button making it the aircraft of choice for hugging eccentric candymakers when they tell you that you and your family are going to live happily ever after.

Sure, without E.T. in the front basket to levitate it, you’re looking at a standard kids bike circa 1982, but the concept of being able to fly your bike places to escape homework, bullies, or in the case of E.T., heartless government agents is something that appeals to every geek, big and small. It might be a while until we get our own flying bike, but we figure littering the floor with Reese’s Pieces in hopes of attracting misdirected aliens is as good a place to start as any.

The modded Conwing L-16 known as The Sea Duck in Disney’s TaleSpin was pretty cool on the basis of its own rustic merits. Arguably a bottomless flying junk drawer, the plane did do some pretty cool stuff, namely dodge and barrel rolling away from enemy fire and harmful weather conditions, pulling Kit behind it so he could cloud surf on his airfoil, and of course, land in water. That being said, The Sea Duck was also piloted by Baloo the Bear, which should erase any doubts one might have about the awesomeness of this particular air vehicle, as any plane with a bear at the helm is an awesome one indeed.

The Nimbus 2000 is the broom Harry received when he first joined the Gryffindor Quidditch team in the role of the team’s Seeker. Even though it’s not currently the fastest broom in the Harry Potter universe (that honor belongs to the Firebolt) it was the best broom available on the market when Professor McGonagall gifted it to him, thus making it arguably the most famous broom in Potter lore. The fact that it lets you play a studly game of Quidditch while impressing all the chicks at Hogwarts at the same time is a nice side bonus, too.

The actual story of 1992’s Radio Flyer is oddly depressing, and the act of combining the dark subject matter with the product placement of a beloved childhood plaything is equally bizarre. However, in the film’s climax, the movie’s two brothers (played by Elijah Wood and Jurassic Park’s Joseph Mazello) convert their Radio Flyer wagon into a plane so that Bobby (Mazello) can escape his abusive stepfather. Again, pretty dark stuff, but how cool would it be to work with your kid brother to change your lame toy wagon into a freaking plane? We would vote for extremely cool, if a coolness vote involving this particular subject were to be held.

Commonly referred to as “Archie” by its pilot Nite Owl II, the coffee dispensing air machine known as The Owlship had a wide array of awesome features going for it. Firstly, in terms of self defense, it included “screechers” that could freeze enemies in their tracks by way of high-pitched sound emission and a fog vehicle concealment utility to help it avoid detection when necessary. When it came to switching to the offensive, Dan Dreiberg could call on Archie’s water cannons, missiles, and flamethrower to do the talking. A Swiss army knife of superhero aircraft technology, the Owlship even had hover bikes packed inside it just in case, which proved handy during Nite Owl II and Rorschach’s ill-fated Antarctic adventure. Finally, and perhaps most importantly, it made for a great setting for Dreiberg to finally overcome his sexual inhibitions and give Silk Spectre II a good rogering in.

Originally known as the “Batplane”, the Batwing has seen many makeovers over the years, ultimately becoming the bat-shaped testament to air-badassery it is today. Probably Batman’s most terrifying vehicle, the Batwing has made numerous appearances in both film and TV, including Batman, Batman Forever, and Batman: The Animated Series. Stacked with missiles, machine guns and a metallic claw for dispatching of poison gas spouting balloons and terrorizing thugs by swinging them over the streets of Gotham, the batwing is one of nerd-dom’s fiercest aircrafts, despite the fact that it was so easily knocked out by one shot from the Joker’s ultra-long pistol in Tim Burton’s take.

It’s probably a safe bet that most geeks have spent time fantasizing about running down the kids who bullied them in school while riding on the back of the giant muppet from hell known as Falcor, a la Bastian in The NeverEnding Story. Yes, the importance of the beloved magical dog-dragon hybrid has been well documented in the geeksphere of late, but that doesn’t make him any less significant. You see, not only can Falcor be used as an excellent method of air transportation and attack weaponry, but he’s also your friend, and he’s soft. Plus, that crazy ‘RaaAAAAAHHH sound he makes when he’s flying is probably up there with Chewbacca’s growl in terms of the greatest geek sounds ever, but alas, that’s another list for another day.

A flying car? Sure, okay. A flying DeLorean? Getting warmer. A flying DeLorean that travels in time and runs on garbage? I’ll call the dealership. Unfortunate lack of real world availability aside, Doc Brown’s gift to geeks is a hard lock for number 1 on this list, thanks largely to its style, flexibility, and er, time travelness. Sure, going 88 miles per hour in a car with a light up Y in the back seat isn’t likely to help us get any closer to traveling back in time to place unethical sports bets than we already are, but if this is the wrong way to time travel, then we don’t want to be right.