If it were not for public service announcements, would any of us know how to behave? If these time-filling lessons weren’t around, would the populations of our cities be extinguished due to drugs and litter-fed mutant death rats? Would the forests burn? Would we eat hot fudge sundaes for every meal? Would superheroes sell out their poor aunties for produce? Would women really be bears? Would prejudice and sexism and homophobia and sadness once again rear their ugly heads, threatening to destroy the serenity of our post-PSA utopia? Fortunately, these aren’t questions we’ll ever have to answer. For we live in a world where PSAs act as televised moral compasses–teaching us what pitfalls to avoid as trudge our way through this damaged planet. The effectiveness of these messages is spotty at best, but at least they’ve given us some great pop culture moments, right?

Over the years there have been many unforgettable public service announcements–from the one with the crying Native American who wasn’t really a Native American to the one with a fallen children’s icon espousing the dangers of drugs in what may have been part of his court-ordered community service. Public service announcements are informative, fun and, more often than not, terrifying. With that in mind, this super-sized Daily List focuses on the most memorable PSAs from the last 30-some odd years. So put your common sense on the backburner and prepare for the nostalgic wonders (and terrors) that await you within.

And why would he? Gung Ho knows a thing or two about how harmful people’s judgments can be. He’s had to endure a ton of adversity to become the mustachioed, camo-wearing in every environment, super solider/bear icon that he is today. Yo Joe!

18) Childhood Immunizations in a Galaxy Far, Far Away

The first of three Star Wars-related PSAs on this list features R2D2 thinking he has contracted whooping cough. (It would seem that having a rusty discharge or Space VD are far more reasonable illnesses for Artoo to be worrying about). Since this ad isn’t considered canon, R2 and his hypochondria can fuck off. There’s nothing worse than a robotic drama queen. I’m looking at you, C-3PO.

What misguided fools Lion-O and Snarf are. Don’t they release that 90% of all Thundercats viewers are drunken kids? (The other 10% are bitter Topless Robot readers). Way to bite the hand that feeds guys. No wonder your movie can’t get off the ground.

16) No One Has Ever Wanted to “Make a Saturday”

Children aren’t stupid. Okay, they are, but the average kid develops a bullshit detector pretty early on in life. So when a PSA comes on and begins spewing lies, kids will see right through it. That brings us to this entry that leads viewers to believe that the baseball-playing youth of America secretly dreams of eating perverted looking health food instead of hot fudge sundaes. There’s no way I could possibly prove it, but I suspect that the obesity epidemic currently gripping our nation originally began as a rebellion against this ad. Bananas, yogurt and pineapples are no substitute for ice cream wonderment.

Wait, getting pizza isn’t a good idea? There is never a time when getting a pizza is the wrong thing to do. Clearly, the Turtles are high on the pot (insert obvious munchies joke here) and therefore discredited as role models.

13) Yul Brynner: Anti-Smoking Advocate from Beyond the Grave

Making its debut shortly after Yul Brynner’s 1985 death, this groundbreaking PSA helped raise awareness for lung cancer — scaring the hell out of people along the way. Shocking and a bit ghoulish, the ad is the definitive example of how effective public service messages can be when done properly.

Clearly R2 doesn’t give a shit what Yul Brynner has to say. These robots today think that they will live forever.

Timer was an anthropomorphic yellow blob thing that had an unhealthy obsession with human nutrition. Through his Time for Timer PSAs that aired on ABC, he would discuss healthy (i.e. lame) snacks like homemade orange juice popsicles that suck in comparison to the sugary deliciousness of Otter Pops. The above clip features a Wild West-themed ode to cheese that have you wanting to eat a brick of cheddar or yearning to watch the complete run of Deadwood. Preferably both.

In this public service announcement from 1980, Spidey saves New York from a rampaging T-Rex. When the mayor tries to pay him for his heroic efforts, he instead asks for a banana. Meanwhile in Queens, Aunt May has a fatal heart attack from the stress of not being able to pay the bills. There’s another PSA from the same time in which Spidey defeats a huge fly and takes an orange for payment instead of a huge pile of cash. He’s been such an asshole ever since he made that deal with the devil.

With New York being ravaged by giant dinosaurs and all, it’s bound to get a little messy. In order to encourage New Yorkers to clean up after themselves, the city enlisted David Lynch’s help to create this PSA which is either hilarious or terrifying. (I’m still trying to figure out which). Apparently, the NYC underground is inhabited by giant ass rats and each piece of litter brings them one step closer to achieving their rodent dreams of citywide domination. The best moment in this Eraserhead-esque dream of dark and troubling things? Jump to 0:43 to see a 1950s greaser defiantly spitting on the ground as his no-good friends dance in wild abandon around him while the rats slowly plot their bloody rebellion. OMINOUS! OMINOUS! RATS! RATS! RATS!

Note to Stephen Sommers: When Serpentor inevitably appears in one of the G.I. Joe movie sequels, he must look exactly like this.

Maybe America wouldn’t have such a drug problem if somebody *cough* Robocop *cough* had stopped the Nuke epidemic before it got out of hand.

This PSA is a touching ode to vanishing Americana that offers a sad commentary on how mankind’s carelessness impacts the environment. Too bad it’s all a huge lie. The tear was faked, and the actor (Iron Eyes Cody) was an Italian-American. Deal with it.

Mr. Yuk is the name of a green sticker that parents can use to warn kids to stay away from dangerous household products. Originally released in 1971, the stickers are still widely available today — even though the PSA no longer airs. Mr. Yuk endures thanks to a mixture of great graphic design, a simple yet effective idea, the immeasurable power of nostalgia…and a creepy ass theme song.

Rob already wrote about this PSA at length here, so let me just add that while drinking and driving is always completely unacceptable, there’s nothing wrong with just drinking. Drinking is cool, as is watching Gremlins. Combine both of these elements and you’ve got the recipe for nerd bliss. That’s one to grow one!

3) Financial Tips from The Abominable Snowman

When the Better Business Bureau decided to create a PSA about sensible spending, they decided that the ideal spokesman for fiscal responsibility was the Abominable Snowman. Like he’s a frequent viewer of Mad Money. What’s next, Nessie giving tips on how to get into an Ivy League school?

Muftak would have never been allowed to get this shitfaced if Bea Arthur was tending bar. Sayin.

1) Gender-Bending Fun with Smokey the Bear

Guys, have you ever picked up a gal at the bar only to later discover that she was a bear? It probably happens more than you think. Jesus. The purpose of this PSA seems to be more about making people shit their pants with fright than spreading the word about how to prevent forest fires. Just jump to 0:25 in the above clip to experience sheer terror, or better yet, check out the following still. 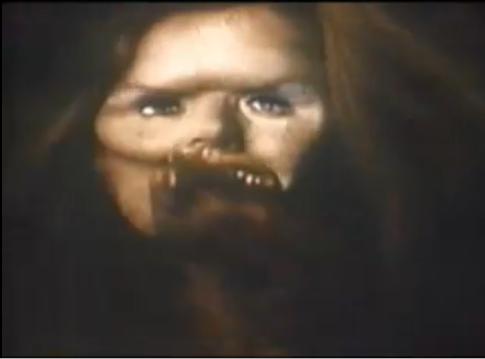 As an apology for the weeks of nightmares you’ll be suffering because of the Smokey PSA, here’s a Topless Robot bonus featuring a very special message from He-Man, She-Ra and Orko: